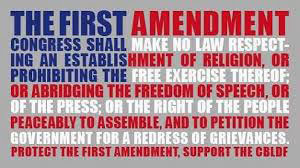 World Net Daily featured an interesting article in which legal experts with the Texas-based Liberty Institute have released a new 2013 report that says Religion and Faith, which are guaranteed by our Constitution, are being threatened by a growing agenda to outlaw them.         The report divides the hundreds of pages of  documentation about attacks on religious freedom in America into three categories: attacks in the public arena, in schools and against churches and other religious groups.
Included in the report, entitled Undeniable: The Survey of Hostility To Religion in America, is this open letter to the American People, which reads in part:

To our fellow Americans,

Your most basic rights are being gravely threatened. This threat is coming in the form of a tidal wave of government-driven hostility to religious liberty in America. Such hostility is a tsunami which—if it reaches shore—will sweep away all your other liberties.
Why? The Declaration of Independence, the birth certificate of our nation, acknowledged that all our rights—such as the right to a fair trial and to elect our own government—are “endowed” by a “Creator.” They are therefore “unalienable” and not to be violated by government.
For that reason, the Founders called “free exercise” of religion, guaranteed in the First Amendment to the Constitution, our “First Freedom.” They regarded the right of everyday people to express open allegiance to the Creator as a safeguard against government attacks on any rights given by that Creator.
But what if open and widespread expression of religious freedom—in government, schools, work- places, the military, public places, and more—is eliminated, driven into the shadows of society? What if religion becomes an opinion only to be expressed privately in your home or quietly in your church, if at all? What if religious liberty becomes a poor, subservient tenant of an arbitrary and imperious government landlord?
If that occurs, then government can erase any of your rights as it sees fit, since government, not the “Creator” cited by the Founders, will be regarded as the ultimate definer, giver or taker of all rights.

In case you think this is an exaggeration, just consider this sample case:  On Miami’s Metrorail, 82-year-old Emma Anderson was forcibly removed at Brickwell Station by a security guard.  According to a lawsuit, the guard accused her of “publicly singing spiritual hymns.”
And here are other equally ludicrous cases:
•  A pastor in New York won the right to hold a Bible study in a community center that had banned “religious” events.
•  A church in Dallas was ejected from an empty high school where it had been holding Sunday services, even though the church had a valid lease.
•  The city of Plano, Texas, tried to prevent WillowCreek Fellowship Church from opening because of the angle of the roof of its church building.
•  An Ohio library ordered a Christian group not to meet there to talk about traditional marriage, unless advocates for homosexuality also were present.
•  An African-American church in Texas was billed for property taxes after its building burned down. The assessor’s argument was that members no longer could meet on the property, so it no longer was tax-exempt.
•  The NFL threatened churches showing the Super Bowl on their big screen televisions.
•  A church in Brookville, Pa., was fined for opening its parsonage to three homeless men to live there.
•  A minister’s invitation to the National Prayer Luncheon was revoked because he was critical of open homosexuality in the military.
•  An Alabama student was ordered not to wear a cross necklace, and a valedictorian in Iowa was ordered to give a secular speech.
•  Cheerleaders were barred from putting Bible verses on banners at football games
•  A third-grader was told he could not include a religious message along with goodies he was handing out to classmates
•  A student wasn’t allowed to say “Jesus” when asked what Easter meant.  (I suppose they only want our kids relating the Bunny Rabbit version).
These are just a few of the hundreds of cases that the Liberty Institute is representing across the country.  In full disclosure, the report is a joint effort of the Liberty Institute and the Family Research Council, which a year ago was the target of a now-convicted domestic terrorist who declared he wanted to kill as many people as he could.   In fact, the perpetrator, Floyd Lee Corkins, told investigators that he got the idea of targeting FRC from the Southern Poverty Law Center, which routinely labels organizations that support traditional marriage instead of the gay agenda as hate organizations.  But for those who would say this report is biased, I would suggest that the influence of such groups as the SPLC shows where the real bias lies.
But there is a ray of hope in this discouraging report.  It seems that, “While [the report] shows that attacks on religious liberty are dramatically increasing in the United States, both in the frequency and in the severity of the attacks, this survey also shows that those persons and organizations, like Liberty Institute, that stand up for religious liberty win -- when they fight."
And that is the real message of this blog post.  When we, who value our religious liberty, take a stand and fight back, we can stop this secular, anti-faith movement.  But we can no longer take our Constitutionally-guaranteed rights for granted.  We have failed to safeguard them when they have come under attack, and the Enemy now has a taste of victory.
Freedom of Religion .... It was at the very heart of the founding of this country.  Fifty years ago, every schoolchild learned that fact as soon as he could read an American history lesson.  It was why the first colonists set foot on this continent.  It's now time to re-establish this most precious liberty, and face each challenge with determination and purpose.

James 1:25   "But the one who looks into the perfect law, the law of liberty, and perseveres, being no hearer who forgets but a doer who acts, he will be blessed in his doing."