How Many Constitutional Rights Do We Really Have?

I read a very lengthy and informative article on Washington's Blog, that pretty much said our Constitutional rights are virtually gone.  I highly recommend that you read it in its entirety, but for the sake of brevity and to give you something to contemplate, I will give you the scorecard that the author assigned to our Bill of Rights. 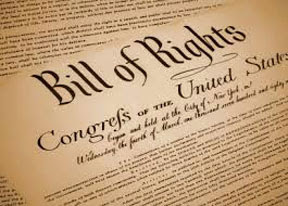 First Amendment:  Protects speech, assembly, religion and the press.  The Supreme Court has also interpreted the First Amendment as protecting freedom of association.  The Secret Service can now arrest anyone protesting near the President, and there are countless numbers of things that will get you labeled a terrorist; including using social media, being part of political movements, paying cash at an internet café, wearing a hoodie, videotaping police officers, liking the Founding Fathers, opposing GMO foods, and being a Christian.
Second Amendment:  The right to keep and bear arms.  The attempt by gun control advocates to ban certain weapons and magazines, and put more restrictions on gun owners (and laws on the books), says it all.
Third Amendment:  Prohibits the government from forcing people to house soldiers.  Score one for the people!  We have an amendment still intact!
Fourth Amendment:  Prevents unlawful search and seizure.  The NSA ... need I say more?  And the lock-down and involuntary door-to-door searches in Boston after the marathon bombing are unraveling this Amendment quite well.
Fifth Amendment:  Addresses due process of law, eminent domain, double jeopardy and grand jury.  The government claims the right to assassinate or indefinitely detain any American citizen or U.S. citizen without any due process.... drone strikes come to mind.
Sixth Amendment:  Guarantees the right to hear the criminal charges levied against us and to be able to confront the witnesses who have testified against us, as well as speedy criminal trials, and a public defender for those who cannot hire an attorney.  The various cases involving the silencing of government whistleblowers testifies to the "secrets" being kept by our leaders.  And then there was the mysterious case against that film-maker blamed for the Benghazi debacle.  It is also hard to trust the justice system anymore; judges have lost their independence, so who's minding the store?
Seventh Amendment:  Guarantees trial by jury in federal court for civil cases.  This amendment still appears to be intact, but severe budget cuts to the courts threaten to throw a monkey wrench into the wheels of justice.
Eighth Amendment:  Prohibits cruel and unusual punishment.  Once again, government whistleblowers are under scrutiny, and being cruelly and unusually punished with unduly harsh sentences meant to intimidate anyone else from speaking out.  And let's not even mention the tactics that are becoming far too commonplace, such as indefinite detention.
Ninth Amendment:  Provides that people have other rights, even if they aren’t specifically listed in the Constitution.  Just exactly what these "inherent rights" might be, will be a topic of intense discussion.  But for the sake of argument, could we consider the following?  Let's start with economic freedom to pursue our lives; safe food and clean drinking water (without being forced to ingest fluoride or genetically modified sources); a choice when it comes to vaccinating our children or purchasing health insurance.  Those are just for starters.
Tenth Amendment:  Powers not specifically given to the Federal government are reserved to the states or individual.  Do you think the government really cares about "the consent of the governed"?  Do you feel their primary objective is to protect you ... or to control you?  The Federal government consistently tramples the separation of powers by interfering with the states' abilities to manage their own business.  The Federal Reserve Bank and IRS are just two agencies that have superceded their jurisdiction.
So let's be honest, folks.  Do you really think that we still enjoy all the Rights that our Founding Fathers intended with this unique document?  Because from where I sit, it appears to me that the Ten Amendments that compose our Bill of Rights are in serious jeopardy of being trampled on, if not being subjected to downright attack.  Will they stand up to such a concerted effort to dismantle them?  We better hope so, because they are all that stand between us and undeniable repression.

Isaiah 33:15-16    "He who walks righteously and speaks uprightly, who despises gain from fraud and from oppression, who shakes his hand free from the taking of bribes, who stops his ears from hearing of bloodshed and shuts his eyes to avoid looking upon evil; [Such a man] will dwell on the heights; his place of defense will be the fortresses of rocks; his bread will be given him; water for him will be sure."