This Is Where The Rubber Meets The Road

Well, it has finally happened.  As PLW and I returned from running some errands, we noticed that our gate was unlocked and a flyer was waving in the wind.  "Meet Your New Digital Smart Meter", it read.  Then we noticed the utility truck still in the driveway.  PLW floored it and stopped directly behind the truck.
"Remove it," he said.  The little meter reader guy must have been coached how to handle unhappy customers, because he smiled and convinced us that the meter had not been installed .... yet .... although it would be happening by the first of November.  I waited in the car, while a tense discussion took place, and then I breathed a sigh of relief when I noticed them both smiling, and PLW's body language relax.  And I overhead the meter guy say, "Nobody is happy about this.  There are a lot of pissed off people!" 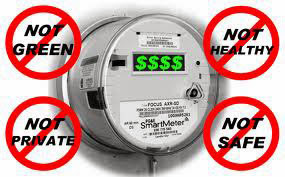 You're damn right!  In the state of Texas, there is a valiant fight going on to change the law and allow utility customers to opt out of the privacy-invading smart meters.  As of now, there is no opt-out provision within the law; but neither is there a mandate that allows the Public Utility Commission to force them on customers.  So I guess you could say, it is all in limbo for the moment.
But thanks to the courage of one woman in Houston, Thelma Taormina, all Texans now have a good chance of fighting this government-encroaching, Agenda 21 mechanism.  In case you don't remember Thelma's story, please click here and read my post.  She was the first person in Texas, as far as I know, to stand up for her individual right to privacy, as well as defend her property rights.  I had contacted her after writing the post, and had enjoyed seeing her take charge of her local 912 Group, and appear on the Glenn Beck program, detailing her ongoing battle to stop the installation of smart meters in Texas.
And it was to her that PLW and I turned this afternoon.  Through her dedication to this fight, we were instructed on exactly how to move forward.  "No Trespassing" signs will be posted that do not give permission to install a smart meter.  Plus, certified letters will be going out to our utility provider, the contractor that reads the meters and the Texas Public Utility Commission that we wish to remove our implied consent to install said smart meters.
Our membership in the national 912 Association will assure that we have the legal backing to fight this, should it come to that.  Thelma's confidence and spirit gave me the assurance I needed; and her admonition to "relax, you're in good hands", didn't hurt either.
I am just so thankful that there are principled men and women who will stand up for us all when it really counts.  Far too many people will simply accept this infringement upon their rights, in essence caving to the bully tactics that are becoming far too common in our governing bodies.  Within our own circle of friends, there are those who have already indicated that it is a losing cause, and we will not be able to change the outcome.   In terms that all Texans can understand, what if William Travis, the commander of the Alamo, had adopted that attitude?  Thank God there are people like Thelma who refused to be bullied, and who continue to inspire the rest of us to stand up for ourselves.  I will let you know the rest of this story as it progresses.