I take it as a positive sign that members of our military are returning home from a decade-plus of war and continuing to serve our country in the halls of Congress.  I'm not talking about the 4-star Generals who serve as policy wonks; who have been bought off and have compromised their loyalty to the country in return for posh positions and pushing a progressive agenda.
I'm talking about battle-hardened soldiers, who have been knee-deep in the ugliness of war and have proven themselves trustworthy and able to make the difficult decisions that saved lives.  These men have dealt with the black and white issues of death vs. survival, right vs. wrong, and moral vs. corrupt.  They entered the military knowing they owed their allegiance to the Constitution and the American people --- something that cannot be said of many politicians.  I am hopeful that these young men who went to war in response to an attack on the country they love, will now fight to preserve and protect her heritage of personal freedom. 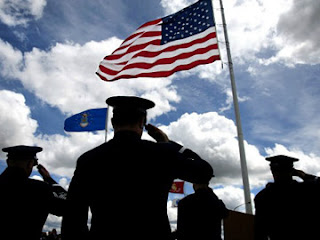 Our nation has a long history of soldiers that transform to statesmen.  Not all of them have made commendable leaders, and I will let you decide which ones put their country first.  Among those who served this nation in the military are George Washington, Andrew Jackson, Abraham Lincoln, Theodore Roosevelt, Dwight Eisenhower, John F. Kennedy, Jimmy Carter, and George H.W. Bush.  While I cannot say that I agree with all the decisions and policies of these Presidents, I do believe their experiences gave them valuable leadership skills.  Whether they all used those abilities to conserve American liberty is debatable.
According to an article on Breitbart.com, "after the 2012 election, Congress is now comprised of the fewest number of veterans since World War II.  Just 19% of our elected leaders in Congress have served in the military. This is down from nearly 80% in 1977."  So what effect has that statistic had on the government of this country?
I believe that a leadership position in the military is vastly different than that performed in Washington D.C.  Again, I'm not talking about arm-chair Generals who run the war from a conference room at the Pentagon.  I'm talking about the officers in the field who earned the trust of their troops and who performed their duties with one goal in mind:  to win and to do it honorably.  Honesty and honor ... that is what is missing in the leadership in D.C.
Our soldiers stand up and take responsibility for their actions and work together for the good of their unit.  Instead, we see Congress passing the blame, looking out for #1, and selling out their constituents for more power and kickbacks.  The result is an increasing number of Americans who feel apathetic about even exercising their right to vote.  What difference will it make?  I have to admit that I and my friends have felt this same despondency.  We have wondered, Is our voice being heard?
But there seems to be a breath of fresh air rising from the ranks of our returning veterans.  Nine Iraq and Afghanistan veterans were elected to Congress in 2012, with more stepping up to run for upcoming Senate races.  They come from the ranks of the Air Force, Army, Marines and Navy SEALS.  Instead of focusing on a party platform, they seem to be serving for the same reason they joined the military in the first place:  to strengthen and fortify America's standards and values, and to uphold the Constitution.  This will benefit all of us, regardless of what party you identify with.
We need to pray for these men and women.  Like all who serve in Washington, they will face temptations, and be forced to make moral and ethical decisions.   But we can ask God to place those in positions of authority that will first, glorify Him; and second, exhibit trustworthiness in continuing the blessings upon this great nation of ours.