A New Year & A New Slant On Gun Control

I could not end the year and begin the New Year without recognizing the shattering effect that the violent acts in Aurora, Newtown, and now Rochester, NY, had on our American soul.  The nation mourned as innocent lives were lost to the actions of mentally unstable men who chose to use a gun to murder defenseless victims. 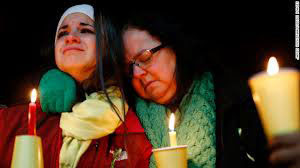 As we expected, there followed a national (and governmental) debate over gun control.  We've heard all the arguments, both pro and con.  And now it seems that in just a couple of days, Senator Feinstein is set to introduce what amounts to the most iron-fisted and oppressive limitations we have ever seen on our Second Amendment rights.
Taxes, registration of gun ownership, and all-out bans on many firearms appear to be just the beginning of the government's campaign against gun-owners.  I don't have to tell you that this means each legal gun owner has some decisions to make.  In that vein, I want to share an email that I received from an anonymous reader.  I think it brings a unique point of view to the discussion.  Here is the email in its entirety:

Dear Belle,
I thought you might like to hear a different angle on the current gun control debate.  As was expected after the recent string of gun-related deaths, the public rushes out to buy every gun and box of ammo they can find.  The shelves are literally empty!  Frankly, I am growing weary of the paradigm battle that starts with every ammo sell-off.
I also know that the media will never look at these "active shooter" events for what they really are.  They like the sport of stoking the fires of the moronic 51% of the country that can't think in a critical capacity.  Conspiracy theories orbit around this new brand of "crazy", and I'm inclined to jump on board any number of the crazy trains, but the truth is, at this late stage, it doesn't really matter.
The current administration is pushing the outcome.  The 51% who have no skin in the economic game or the Fiscal Cliff, don't really care about your gun rights.  As long as they continue to get more free stuff, then let the Second Amendment disappear.  Then you have patriots like the NRA, who are standing relatively silent and dumbfounded, offering no solutions to this outright attack on our rights.  Consequently, we have seen the fear-buying start, and the sell-off cycle repeats itself.
When retailers like Dick's Sporting Goods and Cheaper Than Dirt folded and removed their inventory from shelves, the response from Gun Culture 1.0 was swift.  This portion of the citizenry who has grown up around guns made their opinion known: "You'll get no more of my business."  But Gun Culture 2.0 is where the real influence lies.  These are new people to "the gun game"; a high percentage of them being women who recognize the importance of being able to defend themselves.  Both of these groups need to pull together and yield nothing to this latest gun grab.
Americans need to understand what is at the heart of this Feinstein Bill:  High capacity rifle magazine bans lead to high capacity pistol magazine bans.  Assault Rifle bans lead to every other gun you own being banned.  Even Michael Bane (the head of the Outdoor Channel's gun show line-up, and  most listened to gun podcast) had to endure a waiting period of sorts.  His weekly podcast, which normally airs on Wednesday was pushed back to Friday, so corporate brains could pick the appropriate footsteps in the minefield of public opinion.  No doubt his intentions are good, but he needs to realize that whatever Gun Culture 1.0 was in the past, it won't cut it in this new dynamic.
2013 is going to be a brawl that our currently intact Second Amendment rights might not survive.  These latest shooting episodes have rocked the world of preppers, shooters, and anyone who is a self-thinker.  And thus, the fear-buying has begun, because I surmise that the writing on the wall just got a whole lot clearer.  The truth is, we can't deny these are pivotal events, and whistling past the grave-yard isn't going to work this time.

The NRA fired a weak salvo, that in my mind, hit nothing.  We better get some leadership, and fast, on this issue.  I see the beginnings of a hemorrhage that the NRA is moving too slowly to address.  I can't help but think that if the money we, as a collective, threw into P-mags just these past couple of weeks had been channeled towards a real message, with real leadership, then Mr. O would have to put a cork in Biden, Feinstein and the Moron 51 crowd.  Here's a thought:  Let's say Feinstein gets her $200 tax and registration on every gun you own.  All those who lay low will become instant felons.  There goes the voting rights of the cornerstone of the country.  Can you see that Obama and the Progressive Left are playing 20 moves ahead, and the patriot with his M-4 is no factor at all?
So we better realize that we have some decisions to make.  Are you willing to risk a felony to maintain your Second Amendment rights?  Because if you are, you better wake up to the fact that a felony will take away your license or your credentials; and if you need a license to conduct your business, well, there goes your livelihood.  Attaching a felony to even 5% of the gun crowd will devastate the Conservative Right.  You can bet that there will be someone at that voting place making sure, that as a felon, you don't get to cast your vote.
Could you decide between becoming a felon and keeping your unregistered M-4?  Stop and run the logical argument in your head; look at where the Supreme Court numbers will be in the next four years.  Will the possibility of a felony on all gun owners change their ability to put food on the table, make a living, change our lifestyles?  You damn right it will!  The gun crowd needs to put this possibility into their hard drive and let it compute.
I'm beginning to feel as though we are at Bracken's first chapter in the yellow book.  If you don't know what I'm talking about, it's time to get off your butts and start entertaining some very ugly possibilities.     (Check out www.enemiesforeignanddomestic.com).  Yes, I will agree that it's time to buy more food, ammo, P-mag-30s, and a Belgian Malaois named Spike.  But all that won't preserve our rights.  The time to stand is now.  If not now, when?

This email really hit home for me, and made me see the Big Picture.  There's been a plan to rid this country of the Second Amendment for quite awhile, and we are seeing it play out before our very eyes. We have been complacent, thinking that the anti-gun lobbies were not strong enough to defeat over two hundred years of tradition and the overwhelming number of lawful gun owners.  But threaten our livelihoods, our voting rights, and the fear of a criminal record, and how many citizens would be willing to throw in the towel?  Old School is right.  Each of us have some decisions to make.  And those decisions could profoundly change who we are as a free citizenry and the future of our republic.   Where will you draw the line?

Jeremiah 6:16     "This is what the LORD says: “Stand at the crossroads and look; ask for the ancient paths, ask where the good way is, and walk in it, and you will find rest for your souls. But you said, ‘We will not walk in it.’"