In the aftermath of the election, this story should be an inspiration and a "kick in the pants" for everyone!  We had our little pity parties yesterday, so today it's time to get back to work and back on target.  God is in control, but we have our part to play.  Stay focused on Him and get back in the game!

About a week-and-a-half ago, PLW and I enjoyed a quick visit from some friends we hadn't seen in awhile.  They live in Santa Fe, New Mexico and enjoy an affluent lifestyle.  Unlike many in that cultured and prosperous town, they are soundly conservative in their political views, yet insulated against many of the concerns that we in the fly-over states share.
They are interested in getting their Concealed Carry licenses (none too soon), so we did a little training and ran some drills.   I thought it was quite revealing and right on target when Mr. Santa Fe remarked, "I feel like I'm having to learn how to ride a bike all over again."  He grew up hunting and is quite comfortable around handguns, but like all of us, was amazed at the difference between target shooting and real gun training.  They are both eager for more of the latter.
That night, after PLW grilled some fantastic T-bone steaks, we enjoyed a fine bottle of wine and discussed the state of our country.  Mind you, this was pre-Election, so we were all hopeful that our fears wouldn't materialize.  That being said, it probably won't surprise you to know that Mrs. Santa Fe was much more intuitive about what we are facing.  She just hadn't fit all the puzzle pieces together.
An event the night before at a hotel in a major city had set her warning bells off.  Soldiers with "Homeland Security" written on a deuce-and-a-half-style truck, and sporting curt attitudes, left them with lots of questions, and provided our conversation starter.
I could have gone into all the theories about the National Guard training for civilian unrest, the government buying up humongous quantities of ammunition, or any number of conspiracy speculations.  But I wanted to find out what they were doing about preparing for any kind of collapse.
They live a fast-paced life, with both of them having a successful business that doesn't leave much time for scouring the internet and keeping up on the latest news.  While they both "feel" that things are headed in the wrong direction, they are not on the same page as to what to do about it.  We discussed our dire economic situation and all the scenarios that could result in a societal breakdown.  What were their plans to defend themselves against a total disintegration of services, law enforcement and food supplies?  Did they have a plan for evacuating the city?
It was obvious that Mr. Santa Fe wasn't buying into the necessity of making plans.  (I'm sure that has changed after the election results last night.)  While not discounting that a collapse could happen, his attitude was "If all this is coming, why even go into work tomorrow?  What am I working so hard for?"  He couldn't see beyond an image of chaos to how to survive on the other side.  (Classic "normalcy bias".) 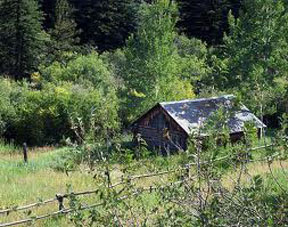 Now, Mrs. Santa Fe?  That was a different story!  She said, "We have a summer cabin up in the mountains, but we just shut it down for the winter.  We couldn't go there."  My response was, "Why not?  Let's consider it!"  At first she went through the list of all the things that made the cabin a poor choice ...... it was small; there was no electricity, so it would be freezing in winter; they would have no access to water since the cistern would be dry or frozen.  As I pointed out that the cabin might not be the optimal solution, it was all they had.  If Santa Fe is burning, where would she go?  I could see the light bulb go off over her head.
I asked her, "Do you have a wood burning stove?"  The answer was yes, but they would need to get several cords of wood delivered in the next couple of weeks before the snows came.  I pointed out that the smallness and remoteness of the cabin made it a perfect "bug out" location, and there were people all over the country that would be envious of their situation.  I also told her that her cistern probably wouldn't freeze since it is underground, but in any case, they could melt snow for water, and in the spring and summer their small mountain lake could provide water that could be filtered through a Berkey water filter.  Another short-term problem solved.
As we went down her checklist of concerns, she quickly became excited as she realized that first, there was a real need to begin thinking about this kind of scenario, and secondly, that she really could solve much of her logistical problems and make this happen.  Her biggest issue was food.  They had none stored and she would need to get it to the cabin as quickly as possible.
We told her to start with beans and rice, peanut butter, canned goods.  She swung into action, making a detailed list and calling the caretaker of her cabin to get her cords of wood ordered and delivered.  She called her son in Colorado and was delighted to find that he was way ahead of her and has been mentored by someone who has him up to speed.  He was on board and eager to help with getting supplies to the cabin.
She took down phone numbers for Emergency Essentials and planned on calling from the road as they made a few more stops before heading back home to Santa Fe.  She was on fire!  Now, I have to tell you that her husband thought we were nuts.  I asked him, "Do you just think we are crazy?"  And he answered, "No, I can see that what you're talking about could happen, but I just keep thinking, 'why am I working so hard' if it's all going to come crashing down?"  It's obvious that he's not there yet.  But she's not waiting.
They left the next morning, and she made me promise I would keep her updated on things as she needs to know.  After they left us, they travelled and visited more friends, but she wasn't waiting until she got home to set her plan in motion.  The text messages and phone calls told us she was handling business.  She hit a snag when she was told that buckets of rice and beans were on back order for 3-4 weeks.  (In obvious anticipation of the Election.)  Her disappointment was compounded by an extremely rude customer service rep at Emergency Essentials. Not a good experience for a new Prepper!  But we are helping her to find alternatives.
She knows she's behind the curve, but she's determined to get her ducks in a row.  They are fortunate in that they have the financial means to acquire all they need now.  It will just take a lot of time and effort to coordinate it all and transport it to their safe location.  But I have no doubt that she will accomplish her mission.  She has the ability to see things quickly and sharply, and she's not afraid to take matters into her own hands to secure her family.  I'm so proud of her!
Now I want to caution others that might be reading this post, or who know someone who should be reading this post, that it is not too late!  The Election results should have set off warning bells for anyone who is even paying the slightest of attention.  But after Tuesday night, the window is closing fast.  PLEASE consider making plans to secure your family's safety and well-being.  If you have a strong sense that what I'm saying is right, then act on it!  Don't wait for everyone in your household to get on the same page.  Take the bull by the horns and make it happen!   The lives of your family members may very well depend on your efforts.

Postscript:   I got a call from Mrs. Santa Fe last weekend, and she sent me photos of all her supplies, her cords of wood, and the small storage unit she had delivered to her mountain cabin.  She has also scheduled a bulldozer to dig out her mountain pond to retain more rain water.  She has accomplished her goals in one week and once everything is in place, she will return to living her "normal" life, knowing she has secured her family as best she can.  She told me that Hurricane Sandy only served to accentuate the warnings we had given her, and proved that she was doing the right thing.  Then she called yesterday and thanked us for taking the time to educate her.  She said that if she had not taken the emergency steps to prepare, she would have been devastated on Tuesday night.  She said this is only the beginning, and she will be continuing to educate herself, while adding to her stores.  She is evidence of what one person can accomplish when they put their plan in motion.  You may not have the same financial means as my friend, but you can begin and take one step at a time.  Share her story with anyone who needs a reminder that time is wasting!

Proverbs 1:5    "Let the wise listen and add to their learning, and let the discerning get guidance—"
Posted by Pam Kohler at 7:00 AM