Thankful For A Narrower Focus

Earlier this week I was invited to a political luncheon in which a noted state leader from Americans For Prosperity was scheduled to speak.  AFP is an organization of grassroots leaders who champion limited government and free markets on the local, state, and federal levels.   Their hope is that as everyday citizens become more educated about our government's economic policies, they will become advocates in the public policy process, and effect the change that we need.  Short and sweet .... they uphold prosperity and freedom.
I had been eagerly anticipating this particular speaker, because I was impressed with the work she was doing as our State Director for AFP.  So I drove the 40 minutes to the luncheon, only to find out that she had been hospitalized the evening before.  They couldn't find a replacement speaker on such short notice, so some of the local political candidates in attendance agreed to stand up and give a short speech about their campaigns.
"Oh, great,"  I thought.  "This is going to be boring and a big waste of my time.  I have blog posts to write."  Well, I have to say that my opinion couldn't have been further from the truth.  One of the men that stood up was my County Sheriff.  I knew his name, but hadn't ever heard him speak, and couldn't tell you one reason why I, or anyone else, should vote for him.  At the end of the luncheon, I no longer had that problem.
The minute he stood up, you could feel the steely-eyed determination and the strength of his character.  He spoke plainly and without hesitation about the problems our border state is facing.  He boldly proclaimed that until changes are made in Washington D.C., and we use every method possible (border fence, technology, drones, etc.) to plug our porous perimeter, we will never stop the drug cartels and their murderous and growing threat to our homeland. 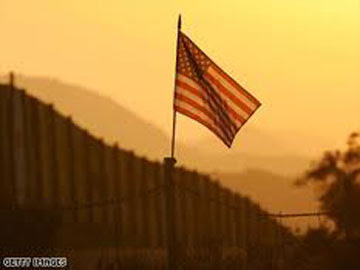 Citing the death of another Border Patrol Agent this week, he angrily stated, "I have no use for the Feds; the ATF and the FBI are no help to us.  They change suits every week and just get in our way. You change Washington --- close our borders --- and the County Sheriffs can get this problem handled."  I don't think I have felt more confidence in one of my elected officials since I began voting so many years ago.  For perhaps the first time, I felt like here is someone who recognizes he works for me and my fellow citizens, and actually wants to fulfill his office requirements!
Because we live in a rural area, with a small number of Sheriff's Deputies on duty, this man is also a strong advocate for my Second Amendment rights.  He knows that he and his men are spread thin, and it is incumbent upon every citizen to be prepared to legally defend themselves.  He approves and encourages Concealed Carry Licenses and firearms training classes.
If you will recall one of my earlier posts, titled What One Man Can Do, you will remember that Arizona Sheriff Richard Mack successfully sued President Clinton and the Federal Government over their intrusion on State's Rights.  He cited "Dual Sovereignty" of both the Federal Government and individual States, and cautioned that we should not elect officials who refuse to act on behalf of the best interests of the state's citizens.  He further advised that whenever the Federal Government oversteps its Constitutional reach, our local elected officials should interpose on our behalf --- that means stand in the gap between us and a tyrannical authority.
I believe we have such a man in our County Sheriff.  He didn't soft-sell the dangers of the drug cartels, or attempt to give us a false sense of security.  He told us the truth.  He told us what needs to happen for him to do his job well; what we need to do to help make our community safer.  Changing Washington D.C. is nearly impossible, but the Sheriff laid our task squarely before us.  Most importantly, I feel confident that this man has our back.  He may not have been the featured speaker I was looking for, but he delivered the same goals as the absent spokeswoman .... prosperity and freedom.

Ezekiel 22:29-31         "The people of the land practice extortion and commit robbery; they oppress the poor and needy and mistreat the foreigner, denying them justice. I looked for someone among them who would build up the wall and stand before me in the gap on behalf of the land so I would not have to destroy it, but I found no one.  So I will pour out my wrath on them and consume them with my fiery anger, bringing down on their own heads all they have done, declares the Sovereign Lord."