My Perspective: Looking Back on September 11, 2001

As I listen to a radio broadcast of the sounds of THAT DAY, it takes me back to all the things I felt that morning.  My husband and I were starting a new phase of our life; we were putting our complete trust in the Lord as we started our new business and moved out of a major city to a small piece of land in the country.  We no longer had the security of twice-a-month paychecks, and had taken that leap of faith of relying on God for our provision.
We had just made a sizable purchase at Lowe's to help us remodel a fixer-upper farmhouse, and were excited about the possibilities of a bright new future.  As we got into our pickup truck and turned on the radio, it was about 8:20 CST.  We heard the announcer say something like, "We don't know what's going on, but it has been reported that a second plane has hit the World Trade Center."  PLW and I looked at each other, and instantly knew that something was very wrong.  Then just a few minutes later, that same announcer said, "We -- we are hearing -- right now that another explosion that -- has taken place. At the Pentagon." 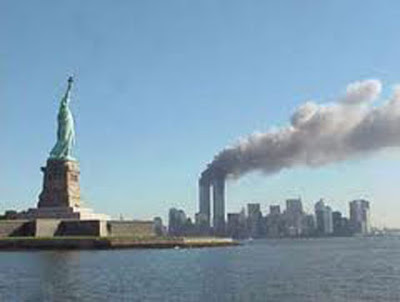 We immediately knew ---- our nation was under attack.  And the re-broadcast of that morning, now eleven years later, elicits the same intensity of both fear and resolve.  I hear the sounds of the police sirens and the horns of the fire trucks.  I hear the voices of the witnesses and the survivors as they describe the smell of jet fuel; the intense heat inside the building; the impenetrable dust that made it nearly impossible to breath; the shouts for help; the falling debris; and most horrific of all, the sight of human beings who felt they had no other choice but to jump to their death.
The radio broadcast this morning replays the phone messages left for families as their loved ones inside those burning Towers knew they would never get out alive.  I hear survivors in the Pentagon recount what it was like to be buried under the rubble and see their fellow workers dead and injured. I hear the stories of the brave heroes on Flight 93; people like you and me, who made the ultimate sacrifice for their country.  I  hear a moment in history that will forever define my life and the narrative of this country.
And I remember realizing that from this moment on, my future lay in the hands of God.  All of this was out of my control and I knew my life and my country would never be the same again.  I remember what it was like when we had to decide whether to make that cross-country trip for our new business, just three days after 9-11.  We discussed it with our business associate and made the decision to proceed with our trip; we weren't going to let the terrorists win.
I remember making our way to a 300 year-old church in Santa Fe on that Friday, a day of National Prayer.  People from all faiths and ethnic groups came together to give thanks to God and ask for strength and understanding.  We resolved to be one Nation under God, and to come together in our sorrow, our pain, and our resilience.  In the midst of our national suffering, we forgot our differences and were proud of who we were ..... Americans.  It felt like a new beginning; as if a new Spirit had come to our land.
So where are we today, September 11, 2012?  What happened to us?  I can honestly say that we are not where I thought we would be.  I feel we are more divided and more spiritually empty than we were the day before those terrible attacks.  I expected so much more.  I expected that we would bond together and renew our commitment to the principles of America.  We seemed to know who we were that day .... the heirs of a legacy.  We weren't a people who easily admitted defeat in spite of difficulties or opposition.  We got knocked down and came back stronger.
I thought we would once again embrace the "Goodness of America" that everyone so confidently and ebulliently proclaimed in those following days.  I thought we would return to a kinder, more empathetic, and charitable nation.  The things that made us self-absorbed would evaporate as we once again became the UNITED States of America.
After all, we turned to God as our source of strength, and as our Unifier, in the aftermath of that terrible tragedy.  Now He has become an idea that is divisive in our national conversation.  And that conversation has become a barely disguised contempt for each other.
What I see is a rising conflict.  There are those who want us to return to our roots; to the solidarity we welcomed that day.   Then there are those who would denounce that notion of America, and would take us in a direction that my grandparents, just 50 years ago, would not recognize.   There are Americans that still mourn for the loss of that day; and those who say we deserved it.
It saddens me to realize that my sorrow for what this day represents has compounded.  I mourn the loss of so much on that beautiful Fall day.  We lost the precious lives of nearly 3,000 innocent moms, dads, children, sisters, brothers, wives and husbands.  We lost our invincibility that day.  Since then, we've lost our united identity, and a shared faith in our leaders and our God.   It's eleven years later, and we need healing now, more than ever.

UPDATE:  As I read our President's proclamation this morning, I am disappointed.  There is no mention of God or prayer, which have always sustained this country in times of sorrow and national tragedy.  Instead, apparently what we need to focus on is "community service." It is just one more indication of the slide toward Godlessness that will be our ruin.  God save us from such irreverence!