9:05     I'm sitting at the computer, working on a project for Peace-Loving Warrior, when my attention is immediately drawn towards an alarming scene outside our studio window.  The blond comes around the corner, screaming with every step she takes across the front yard.  By the pitch of her voice, and the frantic cries, I know something is terribly wrong.
9:06     I watch intently, because she is acting like someone is chasing her.  But I don't see anything and rise from my chair to investigate.
9:07     There he is!  He is running at full speed and is about to overtake her!  He reaches her position and knocks her down, sending them both sprawling.
9:08     I run for the door, screaming at PLW, "Get the gun!"  I don't wait to see if he heard me or is acting on my shouted command.
9:09     I ran towards the attacker, screaming, "Get away from here!  Leave her alone!"  Then I see a second enemy running up on the victim, paying no attention to my attempts to distract him from the young female.  From behind me, I hear PLW running hard.  The two assailants suddenly become aware of us, and take off running; one jumping the barbed-wire fence, the second crawling underneath.  They stop about 20 yards on the other side, and look back to see if we are still a threat.
9:10     PLW, on the run, fires a couple of shots from his 9mm.  One of the scumbags goes down.  The other runs off, but soon returns with a buddy.  They are obviously sizing up our position.  I keep an eye on them while PLW takes that time to return to the house for a rifle.  Time to finish off the injured one and send a strong message to the remaining members of the gang.  One shot from the 10-22; another one dispatched.  The last of the gang runs off.  End of attack.

As I reflect on the scene from this morning, I must admit the adrenaline was flowing, and our actions were automatic.  As we reviewed our "operation", some things became clear.  It didn't matter that the "victim" was just one of our chickens, or that the attackers were part of a pack of coyotes.  This little incident revealed some changes we need to make in our op sec.  And just so you know, there are no small children in our home, so our decisions may vary from those you would make.  Bottom line:  each household must assess their own particular security needs. 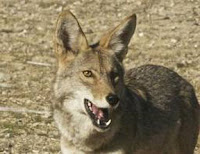 First of all, whenever we are at home, there needs to be an easily accessible, and loaded, firearm within reach.  Having returned from a weekend trip, the gun safe was locked, and PLW had to run from the studio to our bedroom in the house to get his handgun.  Not only was valuable time lost, but the 9mm was not really adequate for the job.  We needed a rifle and didn't have one at our disposal.  LESSON LEARNED:  When we are at home, make sure we have access to all of our firearms. If this had been a human intruder, we would have been at a decided disadvantage.
Secondly, while I rapidly assessed the situation, and correctly evaluated the need for a firearm, I was probably too quick to engage the aggressors.  I actually ran out the door and entered the yard before I knew the full extent of how many coyotes were on the attack.  If that had been a real gang attacking us, I would have prematurely announced my position.  LESSON LEARNED:  If confronted with human assailants, I need to be armed, and fight from behind a barrier.  At the moment I reacted, I didn't really have an idea of how many coyotes were involved in the attack.
Thirdly, we realized the maximum number of attackers that two people can effectively defend against.  There were three coyotes, and they maneuvered successfully.  One tried to draw us away from the injured member of the gang, while the third one ran back and forth, daring us to come after him.  LESSON LEARNED:  If approached by multiple attackers, we must fight from a defensive position; working to back each other up and not be drawn into their playbook. 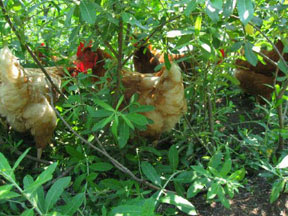 I know that this scenario doesn't replicate an actual gun battle or home invasion, but it gave me lots to think about.  I was in tune to my animals' calls and recognized that security had been breached.  I also know that I can quickly assess a situation and am not afraid to take action.  I know I need to be aware of where my defensive guns are at all times and be able to access them when necessary.  But, I guess the best thing that came out of today's escapade was that PLW and I worked well together as a team.  Without any prior planning, we each responded effectively and efficiently. I kept the mangy critters distracted while he took action and supplied the firepower.  The pack has been decimated and most of the chickens survived.  Yeah, it's an hour before dusk, and two have not come back from hiding in the brush.  I'm hoping they're undercover, still scared from the day's excitement.  It's been a day of lessons for us all!

Psalm 18:17-19       "He rescued me from my powerful enemy, from my foes, who were too strong for me. They confronted me in the day of my disaster, but the Lord was my support. He brought me out into a spacious place; he rescued me because he delighted in me."

Email ThisBlogThis!Share to TwitterShare to FacebookShare to Pinterest
Labels: Firearms and Training, Security