How To Handle The Poor

By now you know that I am a student and lover of American history.  I love to read what our Founding Fathers had to say about issues that we face today.  I am a firm believer that not much changes throughout the annals of time.  History repeats itself; therefore, it can provide valuable insights and lessons, if we will just humble ourselves to listen to its message.
That brings me to one of our most colorful historical figures, Benjamin Franklin.  He was a self-made man; his formal education ended at the age of ten, but he taught himself through his insatiable appetite for reading.  He became a printing apprentice to his older brother, James, at the age of 12, but ran away at 17 to begin a life-long pursuit of notable careers.  His biographical account lists accomplishments as varying as leading author, printer, political theorist, politician, postmaster, scientist, musician, inventor, satirist, civic activist, statesman, and diplomat.  Indeed, in his later years, he was celebrated throughout Europe as a popular figure and philosopher.  But Franklin was always proud of his working class roots, and it is from some of these writings that I draw my inspiration today. 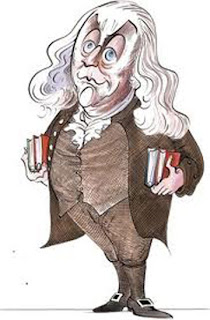 Franklin was fond of corresponding with fellow inventors, and in 1753 he wrote a delightful letter to Peter Collinson, a Fellow of the Royal Society of London, an avid gardener, and the middleman for an international exchange of scientific ideas in mid-18th century England.  He and Franklin exchanged letters on varied subjects, including Franklin's experiments with electricity.  But this particular letter focused more on societal conventions; specifically "Support of the Poor."
It was Franklin's contention that the laws instituted by England were not serving the poor as they should.  He gives a little aside, and a somewhat harsh comparison, between English laborers and those of German descent; noting that the Germans tended to be more industrious and frugal, and less likely to need assistance from the Rich.  He then goes on to say that to relieve the misfortunes of our fellow creatures is our responsibility; it concurs with the desires of God.  But he further defines his philosophy by saying if this charitable relief encourages laziness, and supports a non-productive temperament, then might we not be fighting against the order of God and Nature?  Might not God make Want and Misery a justifiable and necessary consequence of being Idle and Extravagant?
Franklin then goes on to admonish his friend by saying England should be wary of attempting to improve upon God's natural order of reward and discipline.  It was his thought that when we interfere with this natural consequence, we sometimes do more harm than good.  He went on to explain that those who had plenty would genuinely see the provision made for the poor as too little.  But there would be those among the poor who had never been better provided for, and would see these benefits as "quite good and sufficient."   These poor, being quite content with this provision, would then have nothing to fear.  They could scarcely hope for anything better!  Then, Franklin suggests, good luck in inducing them to work at all, and their maintenance becomes a burden on general society.   He follows up this discourse by proclaiming it is human nature to seek a life of ease; of freedom from care and work.  He tells Mr. Collinson, "But as matters now stand with us, care and work seem absolutely necessary to our well being; [the Poor] should therefore have every encouragement we can invent, with not one motive to hard work being subtracted.  And the support of the Poor should not be by maintaining them in Idleness, but by employing them in some kind of labor suited to their abilities of body, etc."
Well said, Ben!  And his words have just as much substance today as 259 years ago!  What this wise man was trying to say was this:  Responsibility and Work are necessary to the well being of this nation; and we should use every means at our disposal to encourage those who are able, to help themselves by earning a living.  We should not supply them with a culture or attitude of entitlement that makes it easier to accept a handout than to earn an honest day's wage.
Unfortunately, we have done exactly that.  Welfare is an institution in this country.  Currently, nearly 46,500,000 Americans receive food stamps; that's nearly one in seven, and that figure is up over 70% since 2007.  According to CNN, "The U.S. Department of Agriculture has been running radio ads for the past four months encouraging those eligible to enroll. The campaign is targeted at the elderly, working poor, the unemployed and Hispanics ....   The Stimulus Act made it easier for childless, jobless adults to qualify for the program and increased the monthly benefit by about 15% through 2013."
Please don't misunderstand me!  I recognize the value of programs that help those who are truly in need.  Like Franklin, I believe that it is God's will that we share His provision with those who are hungry and destitute.  But I also believe in the old Chinese proverb: "If you give a man a fish, you feed him for a day.  If you teach a man to fish, you feed him for a lifetime."  I passionately believe that we are not serving our fellow man when we take away his self-respect and sow within him a sense of entitlement and privilege.
So, we haven't listened to our Founding Fathers, and we don't give much credence to history, do we?  Benjamin Franklin would be astounded at the advances in his printing industry; cumbersome presses and plates have been replaced with computer files and soy-based inks.   And he would be amazed at  how we manufacture electricity today, and how it is transported across the country.  But I think he would be painfully disappointed at how we have failed the Poor.  Instead of giving them a helping hand, and the pride and incentive to work for their basic needs, we have enslaved them to a system that fosters and encourages unproductive lives.  They feel it is their right to be provided for, especially if someone else has more.
Sadly, this is not the intent of Charity.  Goodwill and Compassion should seek to elevate humanity, not limit the potential, dignity and self-repect of man.