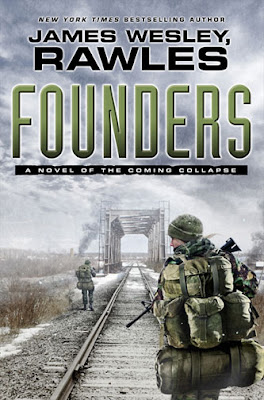 I am extremely honored to have the privilege of providing you with an early review of James Wesley Rawles' latest book, Founders, A Novel of the Coming Collapse.   As you are well aware, I am an avid fan of his writing, and from the moment I read his first book, I must credit him with giving me my wake-up call in a style that was meant to inform, not panic; to educate, not radicalize; and to give sound instruction on how to prepare for the impending disintegration of our country.  And he has done it all in compelling stories that capture your imagination.
As I began this final novel in the Collapse trilogy, it dawned on me how the idea of "The Group" and a survival retreat in remote Idaho was such a foreign idea back in 2008.  When we were introduced to Ken and Terry Layton in Patriots, they seemed on the fringes of the "Survival" movement.  Were they visionaries, or merely extremists?  Time has proven that both Rawles and his characters possessed clairvoyance.
In Founders, we now find the Laytons in the midst of the full-blown "Crunch", and executing their plan to reach the Idaho retreat.  What I loved about reading this book was how skillfully Rawles has woven "teachable" moments into the riveting storyline.  Through Ken and Terry's cross-country trek we are introduced to countless survival tips that we should consider and implement.  If your circumstances could find you traveling long distance on foot, you would do well to pay attention to what they include in their backpacks; their methods of travel and how to avoid "refugees" on the road; and the way they barter their security services for room and board during the non-travelable winter months.
And true to form, the book abounds with other fascinating characters.  There is Sheila Randall, the innovative owner of a microstore during the Crunch; Maynard Hutchings, who abdicates the sovereignty of America to become the head of the Provisional Government; Ben Fielding, a Messianic Jew and member of the Resistance; and Captain Andy Laine, our hero from Survivors, who agrees, along with his wife, Kaylee, to work undercover for the Resistance.
There are countless other personalities that contribute to the story, and demonstrate the mindset and skills that will be necessary to survive the very real collapse we are facing.  For me, perhaps the most beneficial element of Founders, is the mental picture Rawles paints of just how this country might change when the economic collapse finally occurs.  It helps me to visualize what that could look like; how the structure of this country might be reshaped and how we are most likely to respond.  He vividly portrays what hyperinflation will look like with empty store shelves, a rush to buy tangibles; and a race to pay off mortgages with inflated dollars before the reset button is activated.
At first, there will be a "benevolent" new administration; a seemingly well-intentioned "Provisional Government" (PROVGOV).  Then we begin to see controls gradually increase, and key industries and utilities "nationalized".  Wage, price, currency and credit controls are instituted and the PROVGOV establishes a "New Army" to maintain domestic tranquility; only to find out that they are a foreign occupational force and the UN is calling the shots.  This may be a novel of fiction, but it reads like the real world.
There will be Christians who planned on being raptured before this SHTF, and thought that prepping showed a lack of faith in God's providence.  This is the same mindset that the people of Stalingrad held during WWII, and just like those poor souls, millions will starve and freeze during the first winter of the Crunch.  And then there is the looting of America by the foreign UN-sponsored troops who are hired to "pacify" the "terrorist sympathizers" who don't agree to be taxed at 40%.  The New Army then helps themselves to the priceless inventory of jewelers, coin dealers and gun shops across the U.S.  All those that resist will be shot or arrested.
But don't think that Rawles leaves us without hope.  There is the Resistance, and the author makes it quite plain that this type of totalitarian regime will fail in America for a multitude of reasons, including  the spirit of liberty that resides in the bosom of every patriot.  Never count us out, and never think you've defeated us.  Like the patriots of '76, we know how to fight against foreign tyranny on our home soil.  Rawles is able to capture that uniquely American resolve and you'll be proud of how we acquit ourselves.  In the end, his novel leaves you with a portrait of our country in the far future-off that will both surprise you and confound you.  And that's the goal of any good novel.  Well done!

(The release date for Founders, A Novel of the Coming Collapse, is September 25, 2012.  Wait until that day and order your copy at Amazon and Barnes & Noble!)

Numbers 10:9     "When you go into battle in your own land against an enemy who is oppressing you, sound a blast on the trumpets. Then you will be remembered by the LORD your God and rescued from your enemies."