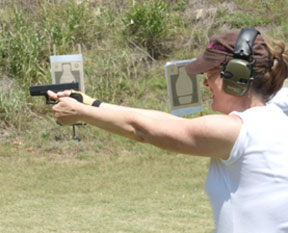 There is nothing more satisfying to me than seeing the enthusiasm with which my female friends embrace gun training.  Although I may have a year or more of instructor-based training on them, we all start out at the same place:  unfamiliar with gun handling, afraid of the recoil, and no confidence in our abilities.  But in no time, we will all be on the same level and advancing and sharpening our skills.
The transformation is startling.  In Debbie's case, one 8-hour Ladies-Only gun class, taught by certified instructors who specialize in training women, saw her go from a fearful, nervous beginner to a woman who can't stop talking about what she learned, how she "loves" her gun now, and is excited to take the next step in training.  For Carol, who had more experience in gun handling, the class gave her confidence that she was learning all the proper procedures and could now practice on her own and perfect her skills.  And all three of us can now train together, and provide real back up and support for our husbands, should the need ever arise.
And the real surprise has been the commitment my friends now have for getting their Concealed Carry permits.  Now that they are developing the skills, they can see the real benefit of carrying to defend themselves.  Terri was thrilled to get her permit in the mail, and has been an ardent student in training for different scenarios, including learning to defend against multiple aggressors.  It's amazing how proper training can make that permit have so much more significance.
Like me, these women are "sensing" a new reality and a real need to take advantage of our Second Amendment right.  Until recently, the gun culture in this country has been "a man's world."  But training courses and shooting ranges are seeing a brisk business, and women are the driving force.  And in households where there has been no previous gun owner, the woman is very often the initiator.  As a home-schooling mom, my friend Bindi, is taking control.  Her husband is following her lead, and agreed to get training, although he is not as motivated as she is.  But Bindi points out that she is at home all day (alone) with their three boys, and she knows she only has herself to count on when it comes to protecting their family.  She is calm and composed as she explains that a gun is the extra layer of protection she needs to defend her children. 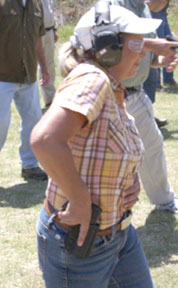 Of course, the anti-gun advocates will point out that having a gun in the home is risky; the potential for harm to a child or an innocent victim makes gun ownership a liability.  But if you ask any of my friends if they worry about safety when a gun is present in their home, they will tell you that with the proper training, those concerns disappear.  Parents must ultimately be responsible for securing that weapon and keeping it out of the reach of curious minors, but there are more than enough ways to accomplish that.
And it's almost laughable, the way the media just can't admit that women are becoming gun owners in increasing numbers.  They will cite poll after poll --- Gallup, the National Shooting Sports Foundation (NSSF), and independent retailers --- that back up the rising statistics, and then provide some lame excuse why these numbers should be ignored .... because there is no "corroborating sales information", or because the polls are stacked in favor of the gun rights gang.  After all, they snicker, the NSSF has a "dog in the fight."
I invite any one of them to come spend a Saturday in any gun retail store, or walk a gun show (where they are still allowed) and see just how many women -- of all ages, sizes, and demographics -- are in attendance.  I guarantee you they have better ways to spend their weekend, and are not just following their husbands around out of boredom.  They have seized the opportunity to become self-reliant and in command of their own safety.  We no longer have to sit on the sidelines and rely on a man to come to our rescue.  Now we are an equal partner in the protection of our homes and families.

Ecclesiastes 4:12     "Though one may be overpowered, two can defend themselves. A cord of three strands is not quickly broken."