Today's topic is going to be a sensitive one, and I hope that I can truly express the way I feel without being taken out of context or misunderstood.  All the vitriol over the Chick Fil-A controversy this past week has been truly upsetting.  It seems to me, that in today's culture, any group(s) (except Christians) are allowed to publicly donate and promote their ideology without cruel and bitter criticism.  In fact, they are encouraged to actively raise awareness for their cause, and if your opinion differs from the group's agenda, and then, God forbid, you voice your opinion (notice, I didn't say disagree), then you are labeled a bigot. 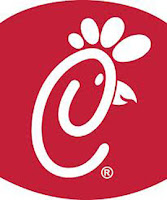 In the case of Chick Fil-A, the company is being criticized for being pro "traditional marriage", and anti-gay.  Their crime?  They donated refreshments for a conference titled “The Art of Marriage: Getting to the Heart of God’s Design” at the Pennsylvania Family Institute.  As far as I know, it is not unlawful to donate your services to an organization.  But because the company does not back down from its Christian values, it has become the target of what I think is unfair characterization and demonization.
So, Dan Cathey, President of Chick Fil-A believes in the Biblical definition of marriage; does that mean he should not be allowed to conduct business in this country?  After all, he has not made it company policy to refuse service to anyone that is gay.   In fact, he made it pretty plain:  "Let me be clear, Chick-Fil-A serves all people and values all people."  There is no case of discrimination here, so what is the problem?
This is what I perceive is going on .... we have developed a culture of "reverse principles" in this country.  Let me see if I can explain what I mean.  Anything that, in the past, America embraced as good and upright and ethical, has been turned upside down by a "collective" of intellectual elites who regard morality with disgust and hatred.  I know this sounds hysterical, but I saw the perpetuation of this attitude when I attended college in the 70's and the academics began filling our mushy student minds with the idea that America, and all it stood for, was not as respectable and good as we'd been led to believe.
And the quickest way to rid our society of its' pollyanna view and usher in a "no holds barred" tolerance?   Remove God and his holy principles from as many areas of our foundation as possible.  That means redefining marriage and the family; eliminating the ability to be independent and self-sufficient; promoting a "collective salvation" through an "any god will do" theology; and limiting the idea that an individual has any "rights" beyond what the State allows.  And how do you accomplish that?  By alienating the citizenry from the One who gives value to those moral attributes.
You see, it's not enough for Chick Fil-A to treat all their customers --- black, white, gay, straight, Christian, atheist, men, women --- with respect and dignity.  In fact, if they had donated food to a pro-Muslim group you would hot have heard a peep out of the gay community.  It is the fact that believing Christians are willing to stand for their faith and support what they feel God has decreed that is at the heart of this storm.
The ironic aspect is that the Muslim faith calls for harsh reprisals against the gay lifestyle, while Christianity can accept and love anyone as a fellow child of God, while not condoning something that they scripturally disagree with.  For me, it is not a matter of pronouncing judgment on anyone; that is something between an individual and God.  But it is a matter of not compromising my faith just so that I can be politically correct.  My gay friends know that I honor and respect them; just as I expect them to appreciate my biblical views.   I will not sacrifice the tenets of my faith, nor abandon them.  We simply agree to show consideration for our differences.  I just wish the willingness to accept our differences could be adopted by the movement at large.
And that's what is at the center of the Chick Fil-A controversy.  Those pushing a radical gay agenda, are against anyone who disagrees with them.  There's no room for a difference of opinion; you MUST agree with them or you are labeled with any number of unfavorable labels.  In this case, Chick Fil-A stands for something, and that something is a belief system that is different from the gay community's.  The last time I checked, diversity was encouraged in this country, and we still have the First Amendment.  But it seems that diversity is supported as long as you are on "the right side."
So whether you agree or disagree with Dan Cathey's opinion, you should respect his right to believe as he does.  You don't agree with him?  Then don't eat at his restaurant!  That's your right.  But you don't have the right to insist that he change his opinion or that his business should suffer.  And shame on the mayors of Chicago and Boston for proposing a ban on business permits for the company!  That smacks of over-reaching abuse by Big Brother.
This controversy should never have reached this level.  Mr. Cathey has done nothing more than express a belief that is at the heart of his faith.  And he has been brave enough to defend his ideals in the face of social bias, and I applaud him for his courage.

Romans 14:10    "You, then, why do you judge your brother or sister ? Or why do you treat them with contempt? For we will all stand before God’s judgment seat."