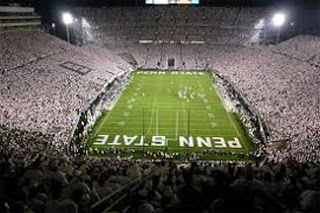 Today I'm going to take a look at the world of sports, which has a lot to say for us as a culture.  What are we to make of the latest sanctions by the NCAA in stripping Joe Paterno of many of his titles and honors?  Like most of you, I have been troubled for quite some time over the Jerry Sandusky/Penn State scandal.  The fact that there seems to have been an alleged cover-up by school officials of Sandusky's actions with young boys is unconscionable.
Through studying grand jury testimony and the independent report of Louis Freeh, (former Director of the FBI), who was hired by Penn State's Board of Trustees to conduct an investigation into the scandal, it is my opinion that Coach Paterno should be held responsible for his actions, or lack thereof.  I realize that this is a sensitive subject, and I respect those whose opinion differs from mine, but let me explain my thoughts.
These statements within the Freeh Report say it all:  The most saddening finding by the Special Investigative Counsel is the total and consistent disregard by the most senior leaders at Penn State for the safety and welfare of Sandusky’s child victims ... Four of the most powerful people at The Pennsylvania State University – President Graham B. Spanier, Senior Vice President‐Finance and Business Gary C. Schultz, Athletic Director Timothy M. Curley and Head Football Coach Joseph V. Paterno – failed to protect against a child sexual predator harming children for over a decade (my emphasis). These men concealed Sandusky’s activities from the Board of Trustees, the University community and authorities.
We will probably never know the motivations behind the silence of these men.  Was the football program at Penn State more valuable to them than the innocence of Sandusky's victims?   If so, I can't imagine how they were able to look the other way every time a new allegation was brought to their attention.  Two of these men are under indictment for perjury and Joe Paterno has died.  He took whatever excuses he had to the grave.
But their decisions have brought disgrace to the proud institution of Penn State University.  Remove Paterno's statue from in front of the stadium?  I have no problem with that.  In my mind, what he failed to do to protect those children overshadows any accomplishments he had as a football coach.  While "the world" seems to think it is an injustice to his memory, somehow I think God values his actions as a man more than his winning record.
And the $60 million fine?  I'm OK with that, too, in the wake of the emails between the University President and the Senior Vice President of Finance.  Between their grand jury testimony and the Freeh Report, it seems clear that both men (and Paterno) were aware of several different incidents, plus the University police investigation.  Further NCAA punishments include a four-year postseason ban, an annual reduction of 10 scholarships over a four-year period and five years of probation; all due to the unprincipled and dishonorable actions of powerful men. 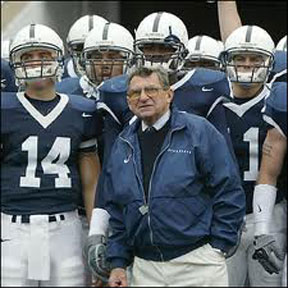 But perhaps the most damaging punishment was reserved for Paterno and his legacy.  The NCAA revoked his 2011 Gerald R. Ford Leadership Award; quite understandable considering his failure to investigate allegations brought to him.  A Leader is a role model; someone worthy of following.  Sadly, I think this is perhaps the one title whose loss would hurt Paterno the most.   And to add insult to injury, they stripped him (and therefore, the University) of 111 wins from the 1998 season (when he was  allegedly first made aware of "problems" with his assistant coach) to the 2012 season.  That decision has overwhelming ramifications:  He dropped from the winningest coach to the 12th position; a huge fall for someone who had achieved legendary status.
I have no doubt that Paterno regretted his inaction.  I do not think he was a malicious or inherently evil man.  But he made a mistake .... a grievous mistake .... by not standing up for Righteousness. Whatever he thought he was protecting, it was not worth the cost, and only God knows what was in his heart.
But here is a question that gives me pause:  Did the NCAA go too far, in that the punishment has extended far beyond the man, and indicted his players who are now considered "guilty by association"?  As one sports writer commented, hundreds of players will now have their careers marred by an asterisk next to their name.  And should they be punished for the failings of their coach?  They were the ones on the field during those games, who made the plays and delivered the points.  Somehow this seems like a "collective" punishment, and a symptom of how our society and culture no longer celebrates, nor punishes, the individual.  We have lost our individual identities and are acknowledged by our associations.  Maybe I'm stretching it a bit, but I don't feel it is right to penalize innocent players for the wrongdoing of one man.  What purpose does it serve?  As one player who was a Nittany Lion from 2006-10 stated, "So this means I lost every game I ever played?"
Perhaps Paterno alone could have the asterisk by his name, as having dishonored the game of football, and therefore not deserving of the title of Winningest Coach.  I don't know what the solution is, but punishing young men for their accomplishments; for victories they earned through hard work and dedication, doesn't seem right.  They, too, have become victims of the evil that pervaded Penn State.

Isaiah 5:20      "Woe to those who call evil good and good evil, who put darkness for light and light for darkness, who put bitter for sweet and sweet for bitter."