Blend Into The Crowd

The idea behind today's post has been written about extensively, and is more commonly known among the survivalist camp as "The Gray Man Concept."  You can find excellent articles on the subject at Survival Think Tank, and Surviving in Argentina.
I just wanted to revisit the idea in a little more straight-forward and logical mode.  You know what "Gray Man" means, right?  Simply put, it is looking like the "average joe" in a crowd; not calling attention to yourself by your clothes, your actions or your demeanor.  You want to appear "gray", instead of flashy and colorful.  Like my title implies, you want to blend into the crowd. 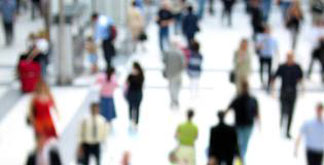 So that's why I want to address all of you out there who make the mistake of thinking it is cool to post pictures of yourself on Facebook holding your brand new battle rifle.  And quit posting all the videos and dates and places of your training locations.  What purpose does that serve, other than alerting the officials exactly where to go to round up all your self-defense weapons?  When TEOTWAWKI happens, do you really want all those "friends" having that information on you?  Where do you think they're coming first?
And Facebook is a nice place to vent, but if you think it goes unnoticed who posts political rants and bold opinions, then think otherwise.  As far as I am concerned, Facebook is a great clearinghouse for all kinds of private information.  If you wouldn't want "the enemy" to know it, then don't post it!
The same thing goes for what you wear.  Vests and 5-11 gear are just fine for the shooting range, but as society begins to deteriorate, it screams "I'm carrying a weapon."  Same goes for all the "Don't Tread On Me" and "I Don't Dial 9-1-1" T-Shirts --- cut the lawn in them or wear them to the range.  Don't wear them out in public.
You also might want to think about the political stickers you place on your back bumper, too.  Think they go unnoticed, and people don't size you up based on their message?  Think again!  You don't want to bring unwanted attention to yourself.
And the next time you walk into a room, be subtle about your OPSEC.  Don't be obvious.  You can smile and scan the room while opening the door for your spouse or children, and not stare down every person in the place.  You can be aware without being conspicuous.
Leave your trendy Maxpedition bag in the car and wear hiking boots or tennis shoes; the tan military boots are a dead giveaway.  So are the buttons and badges worn on your ball cap.  They're great for the range --- not so good for the mall.
So, the next time you're out in a public crowd; at a concert, the grocery store, a ballgame ..... watch and observe.  See how much you can pick up about people by the way they are dressed, or how they act.  See which ones call attention to themselves and why.  Those are the ones you don't want to replicate.  You want to be the guy, or gal, that no one remembers.
I admit that as times get more serious and chaotic, we are all aligning ourselves with different groups of people and causes.  It is natural.  And there are even some of us who write blogs about how we feel!  But I promise you that when I am out in public, no one knows anything about me but close friends and family.
I stay under the radar as much as possible, and look like I belong, wherever I might be.  I don't cower in a corner (which would also call attention to yourself), but I also don't shout to be seen.  I'm just there, like everyone else.  In these days and time, it is no longer desirable to be the one that stands out.  It really is best to just be average, typical and ordinary.

Psalm 31:20        "In the shelter of your presence you hide them from all human intrigues; you keep them safe in your dwelling from accusing tongues."