My Mind Just Can't Comprehend It All!

The news of this week has truly been bizarre!  Just reading the headlines makes my head spin!  I read and watch a variety of news sources; mostly alternative news (I just can't stomach mainstream!), survivalist news sites, Christian news sources (world view with Christian insight), and podcasts of experts on everything from finances and the economy, to what world events say about the Second Coming of Christ.  I know..... it sounds like a hodge-podge of questionable material, but I'm no longer content to be spoon-fed whatever those in authority want us to know.  For instance, have you heard about any of these headlines from the last few days? 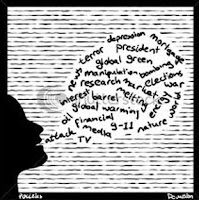 -- Cannibalism on the Streets of Miami

-- Islamic Scholar:  We Hope To 'Raise the Banner of the Caliphate Over the Vatican'


The picture these news items paint is a far cry from the "everything is good; we're on our way to recovery" intellectual fare spouted by the talking heads at the major networks.  There are a lot of Americans suffering, and we are afraid.  That first headline tells you exactly why.  People are seeing their hard-earned savings disappear in their efforts to just keep their heads above water.
We feel it in our household.  When you are self-employed, there is no weekly paycheck from which you budget.   Businesses and customers are cutting back, and everyone's bottom line has decreased.  There is no confidence among the American people that we are coming out of this economic slide, and everyone is on edge.
Then you see the absolutely unbelievable news about cannibalism and you can't believe what you're reading!  Everyone just assumed that the CDC's warning about a "zombie apocalypse" was some kind of farce.  But this is real!  You can even look at a picture of the cannibalized victim if you want!  And the reports are on the increase!  But if it is mentioned at all, it's at the end of the broadcast; as a  bizarre "human interest" story.
We are called racists and haters when we try to sound the alarm against the spread of Sharia Law and fundamentalist Islam, yet when the Dean of Koranic Studies at the Islamic University of Gaza, explains that the eventual goal of the Islamic Palestinians is to first reclaim their nation, and then go on to re-conquer Spain and take over the Vatican, not a single word is broadcast from our mainstream news sources.  But you can read his interview here.
And if that's not enough, the Yad Vashem, the main museum in Israel commemorating the six million Jews who were killed by the Nazi regime during the Second World War was defaced by vile graffiti.  A group calling themselves "the global cynical mafia" took credit for the various slogans, all ridiculing the nation state of Israel.  Did you read about it or hear it on the nightly news?  And do you still think there is not a global hatred of Israel? 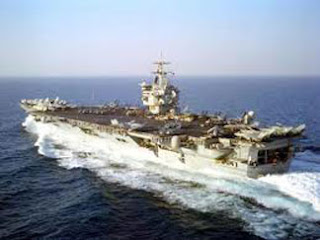 The one story that has me really concerned is the story about the USS Enterprise in the Strait of Hormuz.  This story seems to have some legitimacy, yet after several days of stonewalling, the US Navy has now issued a statement that it is false.  Yet sailors on board had reportedly told family members of witnessing an attack by jets, and there were possibly injuries or even a death.  Centcom initially refused to comment, and then after pressure was mounted, finally made a statement denying the event.  But there is enough doubt associated with an article published by Stand Up America, to warrant further investigation.  Where are our journalists and news reporting agencies?
And then last, but not least, is the crazy story that is just breaking as I type this blog post (June 12th).      Apparently radiation levels near the border of Indiana and Michigan registered several hundred times their normal levels, and witnesses reported hearing explosions and seeing military aircraft flying over the area.  The EPA quickly removed the site from scrutiny, and in spite of photos and eyewitness accounts, the whole episode is being ignored.  It seems so incredible, that at first I was inclined to disregard it.  But after reading the story and some of the comments from people who live in the area, there is enough of a legitimate question, that I'm wondering if any of the media outlets will investigate, much less report on this phenomenon?  It will be interesting to see if, by the time this post is published, there is any confirmation of this event, or an "official" explanation -- or will it just be shoved under the rug as further rantings by the "crazy conspiracy nuts".
So, I guess my whole purpose for writing this post is to vent.  This is just one of those days where I feel the whole world is topsy turvy and nothing makes sense.  I find it hard to make idle chit-chat with friends of old, who I feel I no longer have anything in common with.  When they ask, "What have you been up to?" I just want to say "Nothing you would understand or even be interested in hearing about."  I don't care to hear their recipe for the latest "cool summer alcoholic beverage" or offer my opinion on how they are wearing their hair, anymore than they want to discuss any of these headlines or hear about my search for the optimal way to carry my concealed weapon.  And that doesn't even come close to the chasm that exists over our preparing for TEOTWAWKI.  How did we drift so far apart?  And the saddest part of it all is that I know in my soul that I will never reach them for the Lord.  I've tried in so many ways, and they just don't want to hear it anymore than they want to hear my warnings for the future.
So today is one in which I find myself contemplating the "truths" of my life --- what is really of importance in my world --- not the superficial, "feel good" thoughts and events that everyone else wants to focus on, but what I can do (and what I need to know) to make my little portion of the world a better place for me and the people God has put in my life.   I will seek His will for my life, and not worry about meeting society's standards.  I will pay attention to what He puts before me, and ignore what the world wants me to see.  It may be a lonely path, but it will be so much richer with God as my guide.

Proverbs 4:7      "The beginning of wisdom is this: Get wisdom. Though it cost all you have, get understanding."