Are We Willing To Pay The Price? History Revisited 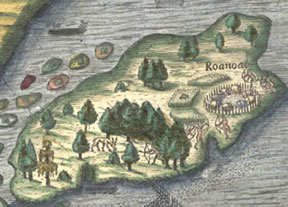 I know that I am a hopeless romantic when it comes to this country.  You see, it was placed within me at a very young age to hunger and thirst for knowledge on our founding.  I have told you repeatedly that I read everything I could get my hands on regarding our early heritage... I especially remember a book on Virginia Dare, who was the first child of English parents born in the New World.  She was born on August 18, 1587, in Roanoke, Virginia; on the same day I was, only more than three-and-a-half centuries earlier.  She was symbolic of the high cost that was paid for establishing the new colony of Virginia.  Along with her parents and 116 other colonists, she vanished sometime between her birth and 1590.  There were no signs of what happened to them.  Known as the "Lost Colony," these brave settlers were the first in a long line who would be willing to pay the price for what this land offered.
For the next two hundred years, more brave souls would cross the Atlantic and forge a new breed of people.  They were willing to risk their lives for this bold experiment called America, where no man limited the potential of another; where, as George Washington stated in his First Inaugural address, "The foundation of our national policy will be laid in the pure and immutable principles of private morality; ...the propitious smiles of Heaven can never be expected on a nation that disregards the eternal rules of order and right which Heaven itself has ordained..."
And that brings me to this brief history that I want to revisit.  You may all be familiar with what happened to the 56 signers of the Declaration of Independence.  But I dare say that it is time we take another look at what price they were willing to pay to protect the liberties and freedoms for their fellow countrymen.  Take a moment and reflect ..... 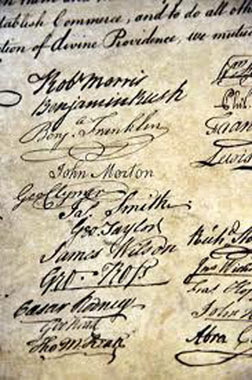 Five signers were captured by the British as traitors, and tortured before they died. Twelve had their homes ransacked and burned. Two lost their sons serving in the Revolutionary Army; another had two sons captured. Nine of the 56 fought and died from wounds or hardships of the Revolutionary War. They signed and they pledged their lives, their fortunes, and their sacred honor.  What kind of men were they?
Twenty-four were lawyers and jurists. Eleven were merchants, nine were farmers and large plantation owners; men of means, well educated. But they signed the Declaration of Independence knowing full well that the penalty would be death if they were captured.
Carter Braxton of Virginia, a wealthy planter and trader, saw his ships swept from the seas by the British Navy. He sold his home and properties to pay his debts, and died in rags. Thomas McKeam was so hounded by the British that he was forced to move his family almost constantly. He served in the Congress without pay, and his family was kept in hiding. His possessions were taken from him, and poverty was his reward.
Vandals or soldiers looted the properties of Dillery, Hall, Clymer, Walton, Gwinnett, Heyward, Ruttledge, and Middleton. At the battle of Yorktown, Thomas Nelson, Jr. noted that the British General Cornwallis had taken over the Nelson home for his headquarters. He quietly urged General George Washington to open fire.  The home was destroyed, and Nelson died bankrupt.
Francis Lewis had his home and properties destroyed. The enemy jailed his wife, and she died within a few months. John Hart was driven from his wife's bedside as she was dying. Their 13 children fled for their lives. His fields and his gristmill were laid to waste. For more than a year he lived in forests and caves, returning home to find his wife dead and his children vanished. A few weeks later, he died from exhaustion and a broken heart. Norris and Livingston suffered similar fates.
Such were the stories and sacrifices of the American Revolution. These were not wild-eyed, rabble-rousing ruffians. They were soft-spoken men of means and education. They had security, but they valued liberty more.


So what about us? ..... which do we value more -- security or liberty?  Have we (you and I) become so comfortable in our indulgences, in our complacency, in our safety as Americans, that we cannot even imagine being willing to pay this price?  Notice that a good number of them died penniless.  Are you willing to take that chance to save our Republic?  They lost their homes, their families, their lives.  Because they knew what they were fighting for!  Do we?  Do we even know anymore what is at stake? 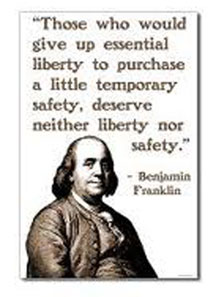 As I've gotten older, I think I understand why, as a child, I had that burning desire to absorb every fact and story on the settlement of this country and our Revolutionary years.  I think God implanted that  yearning in my soul, (and in others like me) because we would need to remind ourselves of what we could lose.  We would need to occasionally revisit what it is all about, and it is those stories, the passions of those life histories, that we must reclaim and remind the present generations.
I'm not sure we still have it.  I'm worried that we've lost sight of who we came from.  In this world's eagerness to become "one with the universe", we may have lost the ability to suffer inconveniences and hardships to retain our uniqueness; our American spirit.
But of one thing, I am clear.  I will honor the sacrifice these brave men made; I will make my choice about where I stand.  I will do my very best to make them proud, and take my place alongside them.  And I know I'm not alone.  With God's help, we can be assured of victory.  Because without Him, our liberties will be lost.  It is just as Thomas Jefferson said, "Can the liberties of a nation be sure when we remove their only firm basis, a conviction in the minds of the people, that these liberties are a gift from God? "


Leviticus 25:51     "If many years remain, they must pay for their redemption, a larger share of the price paid for them."