Saturday Morning Commentary: Here's To All You Stay-At-Home Moms!

I have noticed that all my sister bloggers have had a thing or two to say about Hilary Rosen's comment that Ann Romney, wife of Republican candidate Mitt Romney, and a stay-at-home mom, "has actually never worked a day in her life."  And I thought I could side-step this issue and let others give their opinion, but ..... nope, I feel I still have something to contribute.
Ms. Rosen (that is what the feminists like to be called, right?) tried to paint Mrs. Romney as an elitist, wealthy woman who had nothing in common with a struggling working mother trying to put food on the table.  After all, Ann Romney has never had to lose precious sleep while working two jobs, and still barely make ends meet.  First of all, Rosen is a Washington power player, and former chairman and CEO of the Recording Industry Association of America.  I'm pretty sure "struggle" is not part of her vocabulary, either. 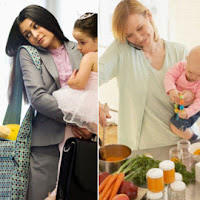 But this attack goes beyond the obvious political game.  While Rosen tried to backtrack by saying she had "no judgements about women who work outside the home vs. women who work in the home raising a family," I think we can see through her ruse.  If Ann Romney had been, say a lawyer, like Hillary Clinton, would Rosen have still said she hadn't worked a day in her life?  I doubt it.  The fact is, Ann Romney was considered an easy target because she was a stay-at-home mom.
You see, decades after the feminist movement lobbied for value and respect for the "unpaid work" that women do in the home and society, they still don't really regard the efforts of stay-at-home mothers on a par with salaried and "titled" jobs.  As the daughter of a stay-at-home mom, I am proud of her accomplishments as a woman; and equally proud of my two sisters, who felt the raising of their children was a worthy profession.  Their contribution to the household and to their communities brought more benefits than any promotion at the office.  Besides the obvious tasks of keeping a house clean, cooking three meals a day and teaching her children how to be better people, it was my mom who was able to minister to the sick children of working mothers when they couldn't take off work.  It was my mom who took elderly neighbors to morning doctor's appointments, even if it meant bundling her pre-school children in the car to tag along.  It was my mom who supported our elementary school teachers during school functions and walked neighborhood kids home from the bus stop.  And I dare say all her efforts qualified as "work"!  And they didn't stop after my dad walked in the door.  She still cooked, bathed kids, helped with school lessons --- all the things "working moms" did, too. 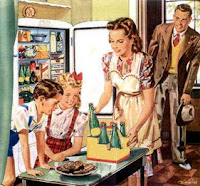 And my mother's chosen "position" in her home didn't mean she was uneducated about affairs of the state.  She was just as capable of having an opinion on the economy or foreign policy or the upcoming Presidential election as the woman who was concerned about the next Board Meeting at work.....I'm not too sure she didn't have a simpler and far more sensible idea of what was going on!
But the bottom line is this.....since the 1980s motherhood and the importance of stay-at-home moms has been devalued by society in general.  And it's sad to say, but it's been other women who have been the worst perpetrators!  Feminism was supposed to be about "equal rights" for women, but instead Feminists still see a valuable and honorable segment of women as unworthy of being part of their ranks.  And you see where that's gotten us, don't you?  The home and family have disintegrated and society has suffered.  There's nothing wrong with working outside the home and having ambition, but not at the expense of disparaging the contributions of those who sought to achieve a different and admirable goal.