Greeks Feeling the Pain; Are We Far Behind?

Last week the news outlet Reuters printed one of the saddest stories I've read in the aftermath of the Greek economic free-fall.  A 77-year-old retired pharmacist, Dimitris Christoulas committed suicide, leaving a note that said he preferred to die rather than scavenge for food.  I quoted a statistic in a recent post that said suicides were up 40% in Greece, but now that statistic has a name.  The reports of middle class people scrounging through garbage cans for food is not just an exaggeration of some field reporter.
Dimitris's death has become symbolic of the dire circumstances that many Greeks are facing.  His death has also led to demonstrations and clashes with riot police, complete with clouds of tear gas.
It's not only the retired that are being affected by the worst economic crisis in Greece since World War Two.  Financial troubles are affecting the younger generation, too, who fear that there businesses will be seized by the bank for failure to pay mortgages and loans. 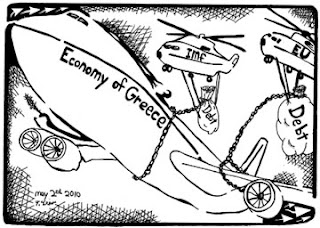 And the Greeks are in the middle of a contentious election season..... you have pro-bailout parties embracing socialism and battling anti-capitalist Communist parties; while smaller parties are cropping up demanding that someone answer for the repeated rounds of wage and pension cuts that have seen the economy shrink by 20% since 2008.
We keep being told that what is going on in Greece is a sign of what will happen in our own country if we don't get our runaway spending under control.  It's easy to dismiss this as many sheeple tend to do.  But the evidence is right before our eyes.  Political instability and a discontented populace, unwilling to "feel the pain", are only digging a deeper hole for Greece to climb out of.   Do you recognize us yet?
Massive austerity cuts are being blamed for lengthening Greece's economic recession....and this is true --- BUT NECESSARY!  The problem is, the citizen's of Greece are not willing to bite the bullet; they have never embraced the fact that they need to suffer through a difficult and unpleasant, but temporary, phase in order to reset the clock and give their economy a chance to recover. 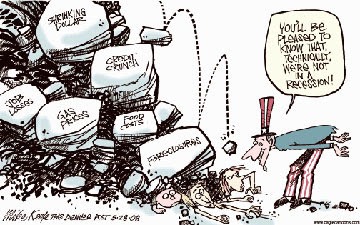 We hear these same arguments here in the US: cutting entitlement programs will only hurt the poor; Wall Street is to blame (along with capitalism), whose time has come; more government spending is the answer.
Greek politicians, who promote increased tax collection, privatizing public enterprises, and taking over health spending, say that these measures would give Greece more time to shore up its economy and finances.  REALLY?  And in the meantime, what do you do?  Why, more bailouts, of course!  Which deepens the debt and lengthens any real recovery.
And isn't that exactly what we're hearing here in America?  "We need to collect more tax revenue" ..... "Unions are the answer" ..... "Health care costs are out of control, and would be better run by the government."
I'm afraid we need to swallow the same bitter pill as the Greeks.  We need to stop the hemorrhage before we, the patient, bleeds out.  Higher taxes, more bailouts, and government take-over of private businesses are not the answer!  We need to stop whining, and take our medicine like a man (and woman)!  Putting it off only makes the anticipation of the pain more acute.  Just rip the bandaid off!  Because that bandage, which was intended to protect the injuries we inflicted on ourselves, is only serving to create more infection.  And thanks to the gutless politicians, they're going to leave that dirty bandaid on until our limb rots off!

Hebrews 12:11    "No discipline seems pleasant at the time, but painful. Later on, however, it produces a harvest of righteousness and peace for those who have been trained by it."
Posted by Pam Kohler at 7:00 AM