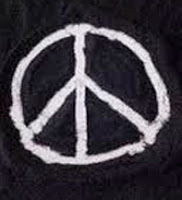 The peace sign:  the hippies of the 1960's proudly claimed it as a symbol of their enlightenment, and an emblem for their "love generation".  After all, they were going to show everyone over 30 that they had overcome the need for war, hate and intolerance.  Problem was, they weren't the first of the human race to adopt this particular design and use it for their own purposes.  Let me give you a little history.

True, in 1958, British artist Gerald Holtom drew a circle with three lines inside, planning for his design to be used as a symbol for the Direct Action Committee Against Nuclear War (DAC).  He used the semaphore letters for N and D to represent his statement against "nuclear disarmament".  (Semaphore is a system of using flags to send information, for instance from ship to ship.)
Holtom's design first appeared in public in 1958, and became synonymous with his cause.  In 1960, this symbol came to America and was adopted by anti-war groups to represent their peace movement.
But if the informed and open-minded flower children of the 60's, let alone the zombie kids of this generation, would do a little research, they would find that this symbol dates back to ancient times. It has gone by many names .... "Cross of Nero", "St. Peter's Cross", and the "Broken Cross."
Nero, an evil emperor of the Roman Empire, was known for both his tyranny and his extravagance.  He executed his mother, and most probably, his step-brother to secure his power.  He also enhanced the cultural life of his Empire, building theaters, palaces and stadiums.  But perhaps his greatest claim to fame is the thousands of Christians that were martyred during his reign.  His wickedness knew no bounds.  He was known for "having captured Christians burned in his garden at night for a source of light" (see Wikipedia.) 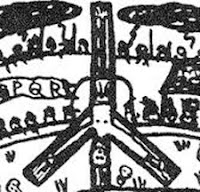 He hated the new Christian faith so much, that he sought to defame the crucifixion of Christ.  Nero, as Evil has done throughout the ages, wanted to eradicate the Christian faith, and believed that there could be world peace without Christianity.  So he sought to turn the cross upside, and break the influence it had upon the masses.  Peter, the apostle, founded the Church of Rome, which Emperor Nero viewed as a threat.  He began a campaign to stop the "troublemakers", and Peter was imprisoned, tortured and crucified upside down.
So it's not hard to see that this symbol began as an image of anti-Christianity.  In fact, anti-religious and satanic groups have used this symbol to represent everything that is opposite of Christianity.  In 1920, it is reported that Archbishop Joachim of Nizhny Novgorod (the fifth largest city in Russia) was taken by Bolshevik agents and crucified upside down on the Royal Doors of the Cathedral in Sevastopol, a port city in southern Ukraine.
In WWII, Hitler's 3rd Panzer Division used this symbol to represent their regiment.  That's why Soviet, Polish, and Hungarian citizens, who have suffered from the Nazi atrocities, have a hard time understanding how it could be used to communicate peace.  This symbol can also be found on some of Hitler's SS soldiers' tombstones.
Does it really come as a surprise that this symbol has re-emerged as part of our modern culture?  A black metal group called Mayhem, used the symbol on an album cover.  The band's history is dominated by murder, suicide and arson.  Make sense?
And film makers have continued to reinforce the upside down cross as an anti-Christian symbol in movies like The Omen (1976) and The Exorcism of Emily Rose (2005).
So when your eight-year old or your sixteen-year-old daughter, tells you, "Aw, Mom, that's not what it means today", what will be your response?  Will you see it as an innocent fashion trend?  Or will you stop and think.....throughout history this symbol has been used to represent hate and death.  Will you at least give some serious thought that Evil has resurrected this symbol many times to advance its agenda.  Don't be deceived!

Psalm 101:3     "I will not look with approval on anything that is vile.  I hate what faithless people do; I will have no part in it."