"Therefore, since we are surrounded by such a great cloud of witnesses, let us throw off everything that hinders and the sin that so easily entangles, and let us run with perseverance the race marked out for us." 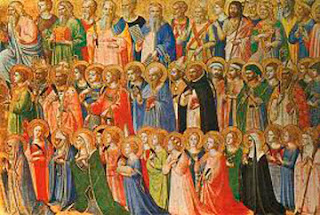 This verse of Scripture follows Chapter 11 of Hebrews, which is commonly known as the "Hall of Fame of Faith".  In this chapter we are given example after example of men and women who answered the call of God and acted out of righteousness.  Just what does that mean?  To me, it says that they did what they knew to be right and good in the eyes of God, no matter what it cost them, and whether or not they received any kind of immediate reward.
For instance, we read that by faith, Abel offered God a better sacrifice than his brother Cain, even though it would cost him his life.  By faith, Enoch lived 365 years of devotion to God; his sole purpose was to live a life that pleased God.  By faith, Noah built an ark in a landlocked region of the earth, where it was inconceivable that there would ever be enough water to float such a vessel.  By faith, Abraham is the epitome of righteousness; he obeyed and went to a foreign land that God called him to;  he believed God when told he and his wife, Sarah, would become parents, and all peoples on the earth would be blessed through them; and he was willing to sacrifice his son, Isaac, because God asked him to.
We hear the stories of the Patriarchs Jacob and Joseph who, by faith,  passed the blessings of God's promises on to their descendants.  And then there is Moses, who, by faith,  agreed to lead his people out of bondage and oversaw their exodus out of Egypt.  There are more mentions:  the prostitute Rahab, Gideon, Barak, Samson, Jephthah, David, Samuel and the Prophets.  What do these stories have to do with us?
What is sometimes hard to understand is that these people of faith are no different from any one of us.  We, too, live our lives by faith -  "being sure of what we hope for, and certain of what we do not see."  We have their stories to give us encouragement that we, too, can live a life pleasing to God; that we can have the courage to follow His lead, no matter where it takes us or what it costs us.
We live in scary times, and I'm absolutely certain that each of these people mentioned in Hebrews were just as uncertain about their future as we are.  But they were no superheroes; no demigods.  They were ordinary people that God was able to use to advance His plan. And He was able to use them because they made themselves available.  It wasn't easy for them.  And like them, I believe each of us has a race to run.  The time in which we live demands that we battle the deception and lies that the World tells us to adopt, and we must stay focused on that which our God has revealed to us.
The promises He gave these Hall of Famers are the same promises He offers us.  They believed, acted on, and trusted in these promises.  God was active and involved in their lives, and guess what?  He is in ours, too!  We can have an equally big impact on our times and further God's agenda.  We can stand up against the unholy things of this world; extend our help, our finances, and our love to those who are hurting; and we can lead others to the Saving Grace of Jesus Christ.
Yes, as this Scripture says, we are surrounded by all these witnesses, but you can be a similar witness for faith.  And I believe this so strongly that I invite you to add an additional verse to Chapter 11.  Verse 41 will read, By faith (insert your name).....  Let your life tell your story!

Sundays are my day of worship, and I intend that to be reflected in this blog.  I hope you find encouragement in this post.