It's A Dangerous World Out There! What Will It Take To Make You Feel Safe?

I don't know how to express it any other way... I am so proud of my fellow females for facing their fears and overcoming false ideas of what it means to own a gun.  We each have our own story and reasons for why we resisted gun ownership.  When I began my own journey, over two years ago, I will admit that fear was not one of my deterrents.  I wasn't afraid of guns; in fact, I was a pretty good shot, and I occasionally joined my husband for target practice.
I just thought it was too much trouble to haul a weapon around with me all the time, and why, if I wasn't willing to do that, would I need to take the time to get trained?  It was not high on my priority list.  Then as I began awakening to the instability of the world and the threats to my safety and my freedoms, I knew that I was living in a new reality, and this skill was absolutely necessary.
But the most amazing thing to me, has been seeing the growing numbers among my female friends who have had their own "aha moments"; their reasons may have been different, but their resolve and their determination to be responsible gun-owners has been remarkable.
I decided to let them tell you in their own words, why this has been a life-changing decision for them.  These are real friends of mine and they have given some careful thought to what they want to tell you.  Cynthia was a self-avowed hater of guns.  She nearly lost a friendship over someone carrying concealed in her apartment.  She had strong opinions about guns, and they were decidedly negative.
Then, she admits, "things began to change."  Threats, verbal and direct, from a family member woke her up.  She saw the parents of this disturbed person in fear and denial, and realized that if she was going to protect herself, she needed to get serious.
"That's when I decided to get a gun.  And if I was going to get a gun, I wanted to use it right.  I was lucky enough to know Belle and her husband, and they hooked me up with a fantastic handgun training class.  I learned to safely handle the gun, and then learned to shoot it.  I can still feel the overwhelming fear of picking up that loaded gun for the first time.  I'm not even sure I hit the target, I was shaking so badly.  But as the weekend went on, I got better, and I found that I was actually having fun!"
When Cynthia picked up that loaded gun for the first time, it changed her life.  "No one saw me move, but I crossed over from the land of nothing will ever happen to me because I'm a good person, into the land of knowledge and wisdom.  I'm not a prepper, or maybe I am one, but I'm still in the closet.  What I do know is that being prepared is not paranoia; it's power."  (BTW, Cynthia, if you're taking the steps to teach yourself new skills and adopting a new mindset, I think that qualifies you as a "prepper".  Welcome to our ranks!) 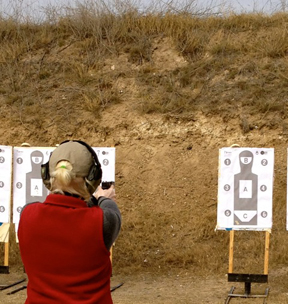 And then there is my friend, Pat, who is a petite professional woman.  But don't think she is a pushover; she has a black belt in Tae Kwan Do and will kick your ass!  For Pat, the trigger point (so to speak) was the breakdown in society.  "I see my neighborhood declining, and crime encroaching.  Break-ins and robberies are no longer an inner city problem.  It's in my own backyard."
Pat has approached owning a gun in the proper method.  She is the proud owner of a Generation 4, Glock 19 and has spent countless hours and days taking tactical handgun training classes.  Her next goal is to get her concealed handgun license.  She feels (and properly, I think) that there are too many people out there with CHL's who are a danger to themselves or others because they don't know how to properly handle their gun or how to protect themselves if confronted with a threat.  So she decided to gain proficiency with her weapon before taking the serious step of carrying concealed.
And her thinking process is one we should all consider.  "For now, I keep my gun at home.  I'll be candid here, and say I'm not sure how I will respond if posed with a threat.  I feel I have to be more firm in my understanding of gun ownership, and have confidence in any decision I may make, if I feel the need to use my weapon.  So even though I plan on getting my CHL, I still have some more thinking to do before I find myself carrying all the time."
Pat admits that it is the mental aspects of owning a gun that weigh on her more than the physical.  Her advice to you?  "Owning a handgun and responsibility go hand in hand.  Get training; get comfortable handling your gun; and give a considerable amount of thought and reflection to whether or not you can aim it at someone and pull the trigger.  So much goes into that split second decision."
So, as you can see, both of these women are not gun-happy, bullet-slinging fanatics.  They have been confronted with real-life situations that have caused them to question their ability to protect themselves.  And they know the value of training.  Perhaps you are where they once were.  It is not, nor should it be, an easy choice to own and carry a weapon.  It's up to you and the time is now to make that decision.

Proverbs 1:5    "Let the wise listen and add to their learning, and let the discerning get guidance..."
Posted by Pam Kohler at 7:00 AM