The Heavenly Realms Are Waging A Spiritual War! Are the Saints Ready to Engage? 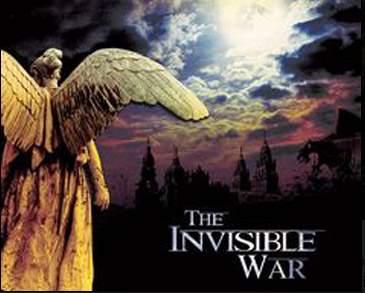 Sometimes I honestly wonder if the Body of Christ understands the concept of the spiritual war that we are engaged in. Do we comprehend that Satan has an angelic force of battle-hardened warriors with thousands of years of experience? Do we grasp that he actually knows he's been defeated by the birth and death of Christ, but he also knows he's got nothing left to lose by waging all-out war against the saints until the time of his ultimate defeat? And what gives him that confidence that he can prolong this war across the heavenly realms?

All it takes to appreciate his arrogance is for us to look at the state of the world, and our own country, to know that the devil has no fear that the saints are a match for his evil and wicked purposes. He has struck at the foundations of God's holy principles and met very little resistance. He has been able to attack the sanctity of life; destroy the rule of law in an ordered society; and replace the worship of God, Himself, with idols of money, power and privilege. He's well aware that the saints have been given instructions to fight against him, and have even been given a suit of spiritual armor with which to battle. But how many Christians can tell you what that armor consists of, how to use it to fight, or even attempt to put it on? Until we stand up in our identity and our power, we will have an enemy who will continue to rage against the followers of Christ.

If you have been following my blog since I began in 2011, then you have seen the direction the Lord has taken me and my various transitions ... from developing my Biblical worldview; to understanding that I am not to be a passive Christian waiting to go to Heaven, but rather am responsible for taking care of my physical and spiritual needs; through my awakening to my power, authority, and the Gospel of the Kingdom of God; to becoming a true disciple of Christ and doing what He did... fighting back against the kingdom of darkness and it's oppression [in both the physical and spiritual realms].

Ezekiel saw wheels moving in unison. Isaiah saw "the Lord, high and exalted seated on a throne; and the train of his robe filled the temple." He also saw the angels that surrounded that majestic throne. Elisha was able to assist his servant to see into the spiritual realm during a frightening episode when their city was surrounded by an army of horses and chariots.  Elisha prayed, "Open his eyes, LORD, so that he may see." Then the LORD opened the servant's eyes, and he looked and saw the hills full of horses and chariots of fire all around Elisha (2 Kings 6:17). He actually saw the spiritual war taking place on the earth!

But it wasn't only the Old Testament Prophets and Patriarchs who had knowledge and experience of this interaction. Stephen described what he saw in the spiritual realm, just as he was about to be stoned to death: "Look," he said, "I see heaven open and the Son of Man standing at the right hand of God" (Acts 7:54-56). Peter was released from prison by a spiritual intervention:  "Suddenly an angel of the Lord appeared and a light shone in the cell. He struck Peter on the side and woke him up. "Quick, get up!" he said, and the chains fell off Peter's wrists" (Acts 12:7). There was a spiritual battle going on over both Stephen and Peter in each of these instances, just as there was when Daniel prayed for 21 days during the reign of King Cyrus. As he prayed and fasted, he had a vision in which a messenger angel [assumed to be Gabriel] told him that God had heard his prayers, but he [the angel] had been held up because he was battling with "the prince of the kingdom of Persia" until, Michael, the archangel, had come to his rescue to help him defeat Satan's angelic army.

It must be understood that "the prince of the kingdom of Persia" denotes a high-ranking demonic angel who has been assigned by Satan to battle in the spiritual realm on behalf of Satan's interests in the nation of Persia. Michael is a "great captain" in the Lord's angelic army, assigned to protect the children of Israel. He is a warrior angel, fighting in the spiritual realms on behalf of all who belong to Christ. So, it is imperative, if we are to serve our Lord as He has purposed us to do, then we must recognize and acknowledge that there is an invisible world just as real as this physical one, and it comprises the spiritual realm. It was created just as certainly as this rock we live on.

These two realms overlap and the fallen angels that aligned with Satan at their fall from Heaven have access to our realm [along with their forces], but we are not powerless to withstand them! We need to understand that we have access to Jesus and the power of God -- the same power that He used in His ministry on earth to deal with those collaborators with the Enemy. And He has given us His permission to call upon those powers (it is His Name that activates them!) to resist the devil and his schemes to oppress us. That is our Authority! And there is a Heavenly army consisting of legions of angels just waiting for us to engage in this war and ask the Lord to activate them!

These forces of the Enemy are in operation now at full speed; they know their time is running out and they aim to weaken the saints as they plan their final assault. We desperately need to understand and see the spiritual war we are involved in! We need to know --- I mean really know, deep in our spirit -- that there is a visible and invisible world that intersect, and we are in the middle of a cosmic conflict that has eternal implications. The souls of every man, woman, and child on this earth depends on us knowing that! And we need to know that the Enemy seeks to blind us, and convince us that this is not real, let alone Scriptural. And he has been winning on that front for quite awhile now. The state of misery that so many in the world are experiencing is proof of that.

So I can imagine that Satan is none too happy that more of us are waking up to the Biblical truth that Spiritual Warfare is part of our commission as the Body of Christ. Our eternal Victory has been won on the Cross for those of us who call Jesus our Savior.  But there are millions of lost souls who are in the cross hairs of the Enemy, and it is our calling to not only share our salvation story, but our purpose to advance the Kingdom of God on earth -- to occupy the territory we have been given until Jesus returns. With that, we can expect skirmishes, battles, and sometimes all-out war with the Adversary. And that means that we need to be more vigilant than ever to put on our full spiritual armor, as Paul advises in Ephesians 6.

We need to understand that the armor is both defensive and offensive. We need not be afraid or timid, or go searching for the fight. We just need to stand firm in the knowledge that there is power in the Name of Jesus, and we have access to it and the authority to use it. If we could see into the spiritual realms, I believe we would see the battle formations in place; we would see the fierce fighting of the forces of Good and Evil. But we must recognize the part we play in this cosmic war; and it's going to take more than worship and praise, although those are mighty weapons for encouragement. But we've got to move beyond religious displays that are devoid of power [and which have no effect on the devil's armies], and we must engage with boldness ... in our speech, in our actions, and in prayer partnership with our personal angels, the angels assigned to our ministries, and the angels that preside over our nation to bring it back into heavenly alignment. And finally, we know that as the Lord of Hosts, Jesus is Commander of the heavenly armies and He will soon ride in judgment of the earth. Let us not sit idle in our spiritual power, but be suited up in our spiritual armor to become conquerors alongside Him in the heavenly realms. With the recognition that this is our reality, we can expect to see the victories that will allow us to fulfill our purpose on earth. And that is what God and Jesus desire for us!

1 Thessalonians 5:6   So then, let us not be like others, who are asleep, but let us be awake and sober.