Baal Worship in 2022! God Will Not Tolerate This For Much Longer! 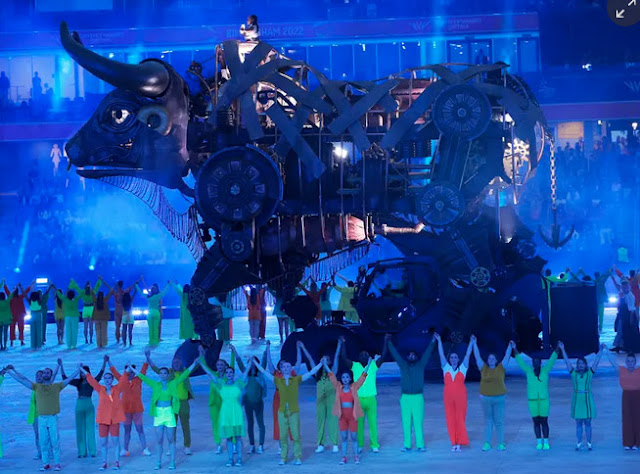 By now, you may have seen the blasphemous images coming from the 2022 Commonwealth Games, held in Birmingham, England. In case you are unfamiliar with this multi-sport event, it is held every four years and attended by countries who have been part of the British Empire, with England, Canada, Australia, Scotland, Wales, and New Zealand taking the lead in attendance among the participating 72 nations. But this year, it was the opening ceremonies that left anyone with an understanding of Biblical history in total shock.

Taking center stage was a 30-foot, 2.5 ton metal bull, built to symbolize one of the oldest pagan gods in the Bible, Baal. According to the editors of the Encyclopedia Britannica, Baal was one of the major gods of the Canaanite pantheon. In Hebrew, the word ba 'al means "owner" or "lord".  So, in the early stages of Israel's history, the use of Baal in names didn't necessarily indicate apostasy or idolatry. The judge Gideon was also known as Jerubbaal, and King Saul named his son, Ishbaal. In fact, for those early Hebrews, "Baal" was the appointed name for the Lord of Israel. What eventually made the very name Baal an abomination to the Israelites was the plan of Jezebel, wife of King Ahab, in the 9th century BCE, to introduce her Phoenician cult of Baal to the Israelites in opposition to the official worship of Yahweh (I Kings 18).

Baal was designated the universal god of fertility, and in that capacity his title was Prince, Lord of the Earth. It is not too difficult to connect the idea of fertility with the Bible and the knowledge that Satan has been in a "seed war" [think DNA] with God since Genesis 3:15 ("I will put enmity [open hostility] between you and the woman, and between your seed [offspring] and her Seed [Jesus]") and Genesis 6, when fallen angels mated with human women to spawn the birth of Nephilim [half fallen angel/half human] -- all in an attempt by Satan to corrupt the pure Jewish bloodline so Jesus could not be born. Furthermore Baal's title of Prince, Lord of the Earth also designates him as Lucifer, or Satan.

We also need to understand that the worship of Baal existed in Egypt when the Israelites were in bondage as slaves. They were in captivity for 400+ years and some of the pagan idolatry began to seep into their religion. So much so that when Moses was on Mount Sinai meeting with God over the Ten Commandments, the Israelites began doubting that the Exodus from Egypt was a good idea, and they reverted to some familiar Baal worship; they built "a golden calf" and they celebrated "shamefully and without moral restraint". We can see this action for what it was when we know that as the god of life and fertility, Baal was believed to have sired a divine bull calf, whose birth meant an abundance of crops and fertility for animals and man.

Because the land of Canaan had been influenced by Egyptian invasion, Baal worship was prevalent among the inhabitants of the Promised Land. And this is why YHWH warned the Israelites to steer clear of the native tribes and remain true to Him and His commandments ... with good reason! The website heavennet describes the rituals of Baal worship like this: adults would gather around the altar of Baal. Infants would then be burned alive as a sacrificial offering to the deity. Amid horrific screams and the stench of charred human flesh, congregants – men and women alike – would engage in bisexual orgies. The ritual of convenience was intended to produce economic prosperity by prompting Baal to bring rain for the fertility of "mother earth." The principal pillars of Baalism were child sacrifice, sexual immorality (both heterosexual and homosexual) and pantheism (reverence of creation over the Creator)."

And that is precisely why the opening ceremonies of the Commonwealth Games of 2022 were so disturbing. The National Times of Australia shared the commentary from the BBC announcers as the idolatrous and blasphemous Baal Bull was brought into the stadium ... "The presenter of the Games is announcing that the Bull will be revealed as the iconic symbol of light... Ladies and gentlemen, anyone with any Biblical understanding knows they are referring to Lucifer! This is worship of fallen angels going on right in front of your face. If people don't believe we're coming into the End Times ... are you seeing what I'm seeing?!? ... This bull is clearly Satanic ... they will fall down and worship the bull! Do you see where they are leading you?" The BBC announcer had no problem in discerning the message the opening ceremony was conveying. I wonder how many others who witnessed it were as perceptive?

That is why it is so important that we take note of these kinds of spectacles and make them known. The world is rapidly sliding into idolatry, and much of it is rooted in paganism and the worship of the ancient god, Baal, whether we acknowledge his connection or not. Stop and take a close look at where the world is headed ... abortion is equivalent to child sacrifice; the culture openly pushes homosexual, heterosexual, and transsexual promiscuity just like the orgies performed during the rituals of Baal worship; the worship of "mother earth" is still alive and well and transforming into radical environmentalism. Nothing has changed! Satan is running his same old program that began in Genesis and we are coming very near to the later chapters of Revelation. Please don't turn a blind eye to what is right in our faces ... stand as a united Body of Christ and declare that we will not bow down to any other God but the Most High! Do not let the Lord find us as He found Israel in the following verse from Hosea...

Hosea 9:10    I found Israel like grapes in the wilderness; I saw your forefathers as the earliest fruit on the fig tree in its first season. But they came to Baal-peor and devoted themselves to shame, and they became as detestable as that which they loved.