Pharmakeia & The Fentanyl Epidemic: The Devil's Weapon Against Our Youth 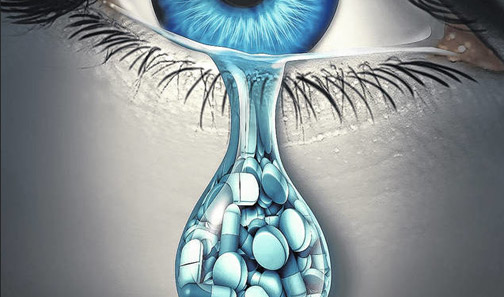 There is no denying it ... America's youth are dying in increasing numbers from a prescription opioid epidemic. The nightly news is flooded with photos of innocent looking youths who have died from Fentanyl, the drug that is streaming across our southern border in uncontrollable quantities. We witness grieving parents telling the sad tale that their son or daughter was able to purchase what they mistakenly thought was some "party drug" through a Snap Chat or Facebook contact. The single pill was delivered to their child at their front door in the middle of the night, when the parents were asleep. They awake the next morning to find that child, as one parent described it, "in the Fentanyl death pose". Their child had no idea that the pill they ordered was laced with Fentanyl, and now they are part of the alarming statistic which lists drug overdoses of Fentanyl as the leading cause of death for Americans aged 18-45. Furthermore, China is the primary exporter of Fentanyl to our country, and this epidemic is now being labeled by Congressional leaders as "an issue of national security"!

But it's not just Fentanyl that is being consumed by this generation. Drugs like Adderall, OxyContin, Percocet, and Hydrocodone have joined together to become the drugs of choice among Millennials. For decades our politicians have touted their "solutions" to stop the illegal sale and use of drugs, even though they have often been complicit in the drug trade. We have seen little to no success in the physical realm. Is it because there is really no will by our leaders to see it defeated? Or is there a spiritual component that, as Christians, we need to recognize and learn how to battle against?

If you have not heard it before, I want to introduce you to the Greek word pharmakeia. It appears in Galatians 5:20 and Revelation 18:23, as the word sorcery. In Strong's Concordance, pharmakeia is defined as "the use of medicine, drugs or spells; drug-related sorcery", and is where we get the English word pharmacy. We also get a more disturbing picture of how harmful pharmakeia can be from Revelation 9:20-21 ... the rest of mankind who are not killed by the plagues of the Sixth Trumpet, "did not repent of their murders nor of their sorceries (drugs, intoxications) nor of their [sexual] immorality nor of their thefts". In another perspective, Greek philosopher Plato likened sorceries to poisoning.

What we need to understand is that these drugs are "mind-altering"; they affect the brain. Kids today are taking them because they are numbing the pain in their lives and these drugs induce states of euphoria; all in an attempt to escape reality. Millennials have been subjected to technology since their birth, and much of it having no basis in reality. They have been allowed to escape into online fantasies instead of receiving the hard knocks that toughen you up to teach you how to endure and persevere through this journey called life. Unless they are blessed to be raised by Christian parents, they may not even know God, the lack of whom makes this life even more scary and terrifying. [But that's no guarantee -- I have known some raised in the Christian faith who were still enticed to try pharmakeia's seductive promises].

We have been at war for most, if not all, of Millennial's lives, and they have been subjected to the very real possibility that this nation has seen its better days. So, they lament their lack of a bright future and many have lost hope that they will be better off than their parents, who they now see fighting inflation, loss of jobs, and depleted savings. So, they turn to a pill that promises an escape from their pain and despair.

But we need to move beyond the physical ramifications of these mind-altering drugs and see the spiritual side. It is far too easy for young people (or anyone, for that matter) to find a website that will introduce you to the supernatural; sites that promise you ways to gain supernatural power and energy to overcome whatever troubles you are experiencing in this life. But here is the underlying agenda of these sites ... in reality, you are circumventing God, the Creator of your life. What is not understood is that God has established boundaries between the natural and the supernatural to protect us. Remember when He told Adam and Eve not to eat of the Tree of Knowledge of Good and Evil? That sin opened the door these 2000 years later to the temptation of pharmakeia, and now our kids are dying in record numbers because they have been tempted to "open their minds" with these drugs that are a combination of science (developed in pharmaceutical labs), magical arts, the occult, the demonic realm, medicines, potions, or herbs ... all in the name of pharmakeia/sorcery.

These drugs open portals into other spiritual dimensions ... some good, as when YHWH revealed the portal to Heaven in Jacob's dream of the ladder on which angels ascended and descended ... some bad, as when the witch of Endor summoned the dead in 1 Samuel 28, and the slave girl who was possessed with a spirit of divination in Acts 16. Fentanyl and other opioids remove that protective barrier in our minds and open us up to the influence of evil sources in the spiritual dimensions. I'm not saying that every person who tries Fentanyl is seeking contact with evil spirits; many use it for recreation and, as I said, an escape from an unsatisfactory or hopeless life. But I am saying that a by-product of these opioids can be the opening of a door to oppression and torment by spirits of fear, anger, self-rejection, self-hatred, and unworthiness. If you're lucky enough to survive that ingestion of Fentanyl, you may have just signed on to a sentence of addiction and/or suicide.

So, these drugs are a perfect weapon of the Devil for this generation of young Americans. They are the perfect escape for those that feel their lives are not under their control; or they feel like they are drifting with no purpose. Many are filled with anxiety, a loss of hope, and they are desperate to numb the pain. But once that portal or gateway is opened to the spiritual realms, you are a target for the enemy of God. And he just wants to steal, kill, or destroy your life. The drugs that he whispers will "take away the pain" serve nothing more than to separate you from God.

At the bottom line, pharmakeia or sorcery, was understood by both Paul and John when they wrote Galatians and Revelation, respectively, to be connected to pagan rituals and ungodly spiritual practices. The early Church considered it rebellion against God and the boundaries He set up to protect us in the spiritual realms. To the ancient Greeks, pharmakeia meant everything from medicines, to psychoactive drugs (causing euphoria and hallucinations, as well as violence, anxiety, panic, and paranoia). Ancient societies and cultures were familiar with mind and conscious-altering chemicals in their pagan religious practices. So, the existence of pharmakeia is not new. God has always hated its hold on people and its destructive and idolatrous uses. And our kids think they are indestructible.

Sadly, with the advancement of science and with the influence of the demonic in our current culture, these drugs have been designed to be hundreds of thousands times more powerful than say, natural opium. And users are dying at an alarming rate. According to the CDC, "Over 150 people die every day from overdoses related to synthetic opioids like Fentanyl". The problem seems overwhelming! How do we reach our youth? How do we convince them that altering the state of their mind removes them from God's protection and opens them to spiritual attack? How do we show them that the presence of God in them far surpasses any "high" or perceived "escape" they get from their involvement with this form of sorcery?

We are losing a generation to this opioid crisis, and unfortunately it is just a sign of how far our culture has fallen away from recognizing who we are in Christ. Proverbs 17:22 says, A happy heart is good medicine and a joyful mind causes healing, but a broken spirit dries up the bones. The hearts of far too many Millennials are not happy, their minds cannot fathom joy, and their spirits are broken ... they are unable to receive the healing their hearts, minds, and spirits need from God, so they turn to a counterfeit, man-made alternative that the devil whispers will ease their pain and hopelessness. They see no physical inheritance in their future, and they are unaware that there is a spiritual inheritance awaiting them in their Heavenly Father's Kingdom. We have to ask ourselves ... how did we, as the Body of Christ, who are to be caretakers of God's Kingdom on earth, let this happen?

1 Corinthians 6:19-22   Do you not know that your body is a temple of the Holy Spirit who is within you, whom you have [received as a gift] from God, and that you are not your own [property]? You were bought with a price [you were actually purchased with the precious blood of Jesus and made His own]. So then, honor and glorify God with your body.