It's Time We Seriously Consider The Fear of the Lord! 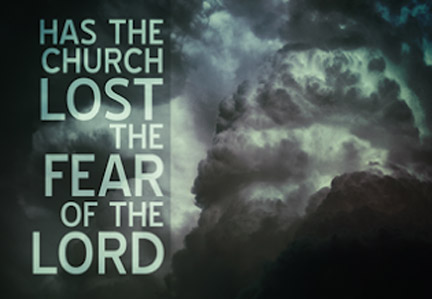 At the end of this week, I will be participating in a Women's retreat and speaking on The Fear of the Lord. This topic has ignited my spirit for quite some time. It is a difficult subject to engage in because of where God is taking me. It requires me to call people to a greater consciousness of the Character and Nature of God; calling them out of our 21st Century "relaxed" form of Christianity and into the deeper understanding of the fullness of the Gospel and God's righteousness. I find myself walking on a tightrope ... how do I express what the Spirit is speaking to me without offending someone or calling down the "religious police" upon myself?

And so, I will just begin and see where the Spirit takes me. Throughout the journey of my relationship with Jesus, I have been amazed to find Him on every page of the Bible ... from Chapter 1 in Genesis to the last verse in Chapter 22 of Revelation! And what the Bible has shown me of Him --whether in the Old Testament or New -- is still relevant for today. But out of all the immense vastness of infinite time, those three-and-a-half years spent as a man changed the dynamic of everything that came before and all that has come, and will come after.  BUT ... and here is where I became careful in my discernment; as the Body of Christ, we cannot become stuck on the image of Christ as a man, and must now [more than ever] see Him in His fullness and greatness as Deity.

While we honor Him as our Redeemer and Deliverer, I'm afraid we may cling to an image of Him as He was on earth -- the precious baby in the manger; the prophet and teacher who performed signs and wonders as God; the sinless man who was willing to die to save us from the wrath of Almighty God. True, He was all that and more! But He is greater than He was while on earth, and we must respond to Him as Supreme Creator of all (1 Corinthians 1:16-17); King of Kings (Revelation 17:14); Mighty God and Everlasting Father (Isaiah 9:6); and Righteous Judge (Acts 10:42)!

Because, you see, as John says in the first chapter of his Book, Jesus was God. And He loved the world so much that He sent a part of Himself to earth to live as a man, not only so that He could identify with our struggles, but also as the payment due God for our sins. God established in Leviticus 20:26, "You are to be holy to Me; for I the Lord am holy, and have set you apart from the peoples (nations) to be Mine". This was spoken to the nation of Israel, but Peter reiterates it to the Early Church, who are our ancestors in the Faith, "But as He who called you is holy, you also be holy in all your conduct, since it is written, “You shall be holy, for I am holy.”  He then goes on to say, " If you address as Father, the One who impartially judges according to each one’s work, [then] conduct yourselves in [reverent] fear [of Him] and with profound respect for Him throughout the time of your stay on earth" (1 Peter 1:15-17). We must discern that God takes sin very seriously, and that Jesus [who is called Everlasting Father in Isaiah 9:6] will be the One who judges us!

So, I've been asking myself the following questions for awhile now: Is it my daily practice to be holy in everything I do and say? Do people encounter me and see me as set apart and different from everyone else? Or do I look like the world? Do I conduct my life in "reverent fear and profound respect for Him"? Or do I justify and excuse my actions by claiming the Atonement on the Cross? Do I truly understand what it means to "fear the Lord"?

I agree with and accept the definition of "fearing the Lord" as gazing upon Him in awe and reverence; [to respect God for who He is, mixed with a sense of fear and wonder]. I recognize His power and position and give Him the proper respect. And I understand that this reverence and godly fear implies that I must restrain myself from any and every ungodly act because of His honor and reputation. I must not diminish what the Word says about how He regards sin! And so, I recognize that Jesus is greater than the angels, greater than Moses, greater than the High Priests of old.

And, here is where I am afraid the Modern Church has ignored Scripture. There is a passage that should have every Christian examining themselves to see if they are living a holy life ... and what is plainly declared in Hebrews 10:26-31: "For if we go on willfully and deliberately sinning after receiving the knowledge of the truth, there no longer remains a sacrifice [to atone] for our sins [that is, no further offering to anticipate], but a kind of awful and terrifying expectation of [divine] judgment and the fury of a fire and burning wrath which will consume the adversaries [those who put themselves in opposition to God]. Anyone who ignored and set aside the Law of Moses [was] put to death without mercy on the testimony of two or three witnesses. How much greater punishment do you think he will deserve who has rejected and trampled under foot the Son of God, and has considered unclean and common the blood of the covenant that sanctified him, and has insulted the Spirit of Grace [who imparts the unmerited favor and blessing of God]?  For we know Him who said, “Vengeance is Mine [retribution and the deliverance of justice rest with Me], I will repay [the wrongdoer].” And again, “The Lord will judge His people.”  It is a fearful and terrifying thing to fall into the hands of the living God [incurring His judgment and wrath]".

Wow! That is a passage from the New Testament! It is a warning about not treating the New Covenant as common, or something ordinary, or average. It is affirmation that the one who insults the Spirit of Grace [who is the Holy Spirit who imparts God's power as grace to us] will be repaid with vengeance by the Lord. We have ample evidence of what that looks like in the lives of Ananias and Sapphira when they lied to the Holy Spirit in Acts, Chapter 5

I know there will be those who accuse me of being legalistic and corrupting the concept of the Fear of the Lord according to the Church.  But a complete and exhaustive study of the Book of Hebrews will give you a more accurate understanding of what Scripture says, instead of ascribing to Church culture.  And I am NOT saying that if you are sincerely trying to live a righteous and holy life and encounter struggles, which result in confession and repentance, that you will suffer vengeance by the Lord. 1 John 1:9 shows the heart of God and Jesus: If we confess our sins, He is faithful and just to forgive us our sins and to cleanse us from all unrighteousness.

But if you are a Christian that is indifferent or callous towards your own sin, thinking you have nothing to worry about because we are under the New Covenant of Grace, then I would suggest that you examine your attitude and see if you willfully and deliberately continue to sin without any consideration of consequences, or just because you think all you have to do is continue to ask for forgiveness and it will be yours. And I would recommend you take to heart Psalm 25:14:  The friendship of the Lord is for those who fear Him, and He makes known to them His covenant. That means fear Him out of reverence and respect, as well as fear His righteous anger for those who willfully and deliberately continue to sin, mocking His costly gift of salvation and redemption.

In conclusion, I just want us to be continually aware that the Fear of the Lord is not only awesome reverence for who He is and what He has done for us, but should be seriously considered if we, who have received that knowledge of Truth [of eternal salvation due to His sacrifice for us] should willfully and deliberately continue to sin. For Scripture very clearly states that there is no further atonement to be made for us, and there is a terrifying expectation of divine judgment. Just as Jesus is greater than the Law of Moses, so is the punishment greater for us than it was under the Law.  This is the undeniable truth of Scripture and no amount of 21st Century Church doctrine or softening of the language can negate the Word of God.  That is why we should all work out our salvation with fear and trembling (Philippians 2:12).  It is a process, and your eternal life [and my Lord] are worthy of this admonition.

2 Corinthians 7:1   "Since we have these promises, beloved, let us cleanse ourselves from every defilement of body and spirit, bringing holiness to completion in the Fear of God".