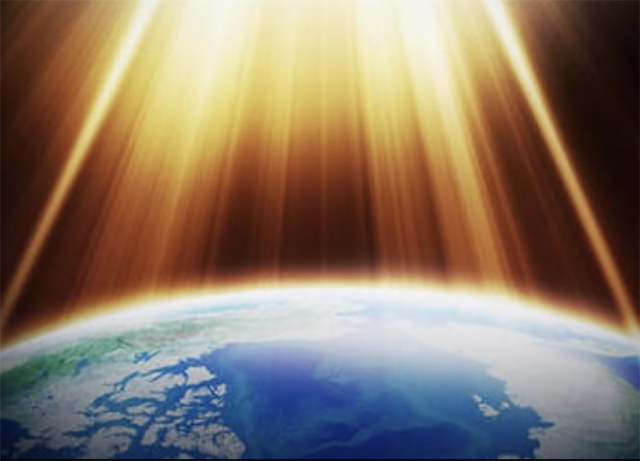 As a student of the Bible, I am sometimes amazed at the curiosity that arises in me as I study the Word. It is not a casual curiosity, but oftentimes consumes me as I find myself spending hours following a trail of bread crumbs that begins with one simple question. This time, it began as I contemplated Jesus's discourse with His Disciples in Luke, Chapter 17. His discourse was prompted when the Pharisees asked when the Kingdom of God would come. Now, before I dove into the complexities and implications of His answer to their question, I had my own question ... When was the idea of the Kingdom of God first considered?

As is my custom, I began my research in Strong's Concordance, looking for all the references in Scripture to "Kingdom of God". There were mentions in 1 and 2 Chronicles of "the kingdom of the Lord over Israel", but these alluded to an earthly kingdom dedicated to the Lord by a specific nation. When was the first time that the spiritual realm of God [in Heaven], of which He is King, is seen as existing on Earth? In other words, when was the first time that a spiritual Kingdom of God was considered as reality of God's will on Earth?

There is no easy reference book to go to with that kind of question. So among my many research options I employed for this question [and my study of Luke 17:20-37] you will find what may appear as two diametrically opposed opinions ... Google and Matthew Henry, a 17th-Century minister whose commentary I find insightful and true to the Spirit and Truth of the Bible. First, Google helped in identifying what may be the first reference to a spiritual Kingdom of God on earth [possessing His righteous principles] as found in Daniel 2:44 ... In the days of those kings the God of heaven will set up a kingdom that will never be destroyed, nor will its sovereignty be left for another people; but it will crush and put an end to all these kingdoms, and it will stand forever.

This reference to the spiritual Kingdom of God is revealed by Daniel as he interprets King Nebuchadnezzar's dream of what will happen to the earthly kingdoms of men in the latter days (Daniel 2:28). So for approximately 635 years [through Judah's captivity in Babylon, and the subsequent empires of Medo-Persia, Greece, and now Rome, the Jewish people and religious leaders have been waiting for this prophesied Kingdom of God to appear. And what is Jesus's answer to their query as to when the Kingdom would come? He replied, “The Kingdom of God is not coming with signs to be observed or with a visible display; nor will people say, ‘Look! Here it is!’ or, ‘There it is!’ For the kingdom of God is among you [because of My presence].”

Now, we understand from the Bible that Jesus's answer was rejected and the religious leaders did not understand nor see what He was saying. The idea was simply not received nor welcomed; it was the idea that the Kingdom of God was present on earth because Jesus brought it with Him [at His First Coming] to share and establish among men. And many Christians still reject that idea today. It is not an exaggeration to say that many 21st Century Christians are waiting for a future event [His Second Coming] to place their faith in the Kingdom of God on Earth. But neither the Pharisees nor modern-day skeptics have embraced the simple explanation that Jesus gave.

The Pharisees might be excused, to an extent, because they didn't have the advantage of the Bible and Jesus's words, written down for all to ponder and study. And they interpreted Daniel's words to mean an earthly, material kingdom. But they were witness to His testimony and His signs and wonders proving that His presence attested to the Kingdom of God on earth: "But if I am casting out demons by the power of God, then the Kingdom of God has arrived among you."  We may not have His physical presence as proof, but we do have the witness of His Word that attests to His declaration, "For the Kingdom of God is in the midst of you!"

Jesus wants it clearly understood that the Kingdom of God [in this age] is a spiritual influence. You cannot point to a place or a nation where it exists, and say "There it is"! And this is where the teaching of Matthew Henry exemplifies what I discern to be the heart of what Jesus wanted the Pharisees [and us] to understand. He writes: "The kingdom of God is within you. It is not of this world, John 18:36. Its glory does not strike men's fancies, but affects their spirits, and its power is over their souls and consciences; from them it receives homage [respect, honor], and not from their bodies only. The kingdom of God will not change men's outward condition, but their hearts and lives. Then it comes when it makes those humble, and serious, and heavenly, that were proud, and vain, and carnal,—when it weans those from the world that were wedded to the world; and therefore look for the kingdom of God in the revolutions [radical transformation] of the heart, not of the civil government."

So, in this first part of my examination of the Kingdom of God, I hope I have set forth the foundation of the path that my study of Luke 17 is going to take me. Sometimes we Christians debate and disagree about the timing or substance of a Biblical Truth that is already at work in our midst. Sometimes we just have to submit our theology to the threshing floor of Scripture, which is a place of separation and revelation ... much like the grain was separated from the worthless straw so the most valuable part of the harvest could be collected. For me, that grain of Truth is that the Kingdom of God exists on Earth -- both now and in the future. Jesus planted it at His First Coming and we will see it culminated at His Second Coming.

In Part 2 of The Coming (And The Progress) of The Kingdom of God I will examine how the Kingdom has proceeded and endured since Jesus's advent on Earth, and what we can expect until it is firmly established in the Millennium. We do not all have to agree with what I have presented, but we can come together in unity as we declare that the Kingdom of God will reign in power and glory forever!

Colossians 1:13-14    For He has rescued us from the kingdom of darkness and transferred us into the Kingdom of His dear Son, who purchased our freedom and forgave our sins.