God and the World's Economies 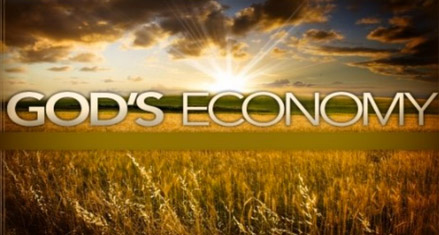 More and more Americans are becoming aware that the world's economic systems are in a lot of trouble. Just in this country alone, we see headlines that report the crash of Netflix; Jeff Bezos loses $13 Billion in hours as Amazon takes a nose dive; and the Dow lost nearly 1,000 points on Friday! In fact, all U.S. stock indexes were in the negative category. The world's economy is still floundering post-pandemic and struggling to find out how to bring "economic equality" to the world's nations, and develop policies that curb inflation, interest rates, and debt [while creating financial stability]. Or so they say.

Perhaps for the first time, we Christians are asking, Is God involved in Economics? What does He say about economic systems in the world? And what should we be looking for? Just because we may all be Christians, it doesn't mean we agree on all the concepts of socioeconomic systems or their methods of operation. Where we stand politically has a lot to do with our view of different economic practices. If you lean towards less government involvement and favor more social and economic freedom, then you are likely to align yourself with capitalism. If you lean toward more government controlling more of your social and economic affairs, then you probably identify with socialism.

I think, as Christians, it is important for us to identify the various world economic systems [and their methodologies] and then compare them to how God commands (and desires) us to operate in His economy. So, let's briefly consider each of the three major economic systems of the 20th and 21st Centuries: Socialism, Communism, and Capitalism. I want to look at their definitions so we have a baseline to compare with what God's Word says. I'm also going to give a very simple example of each that was shared by a friend on Facebook.

Socialism: “A theory or system of social organization that advocates the vesting of the ownership and control of the means of production and distribution, of capital, land, etc., in the community as a whole.” Example: You have two cows. Give one to your neighbor.

Communism: “A system of social organization in which all economic and social activity is controlled by a totalitarian state dominated by a single and self-perpetuating political party.” Example: You have two cows. Give both cows to the government, and they might give you some of the milk.

Capitalism: “An economic system in which investment in and ownership of the means of production, distribution, and exchange of wealth is made and maintained chiefly by private individuals or corporations.” Example: You have two cows. Sell one cow, buy a bull, and raise more cows.

Because each of these economic systems are human-devised, there are inherent flaws and problems with each. Socialism doesn't agree with private property rights of the individual; favors redistribution of wealth through government coercion; discourages innovation and creativity; restricts individuals of determining their own future; and invites dictatorial rule by unrighteous men. Communism [in its pure form] is an atheistic system which cancels individual freedom; centers around secret government surveillance, propaganda, and censorship; whose economy is centrally controlled and ultimately does not meet the people's needs. Capitalism is often characterized [not without merit] of being a system of elitists with privilege and wealth that encourages greed and profit over people. Corruption and cronyism between individuals and governments have often become its trademark, along with currency manipulation -- all of which interferes with free enterprise and the ability of individuals to have control of their own destinies.

So, that's what man has been able to create as forms of producing, organizing, and distributing available resources among the nations of the world. But what is God's economic policy or policies? Remember that Jesus proclaimed that "His Kingdom was not of this world". God's ways of perfect government are different than man's ideas and systems for governing. And we often see Scripture twisted to align with our own ideas of what we think [or want] God to be declaring that He established. For instance, I'm sure you have heard that Matthew 19:21 is all about Jesus teaching a socialistic redistribution system:   (Jesus told him, “If you want to be perfect, go and sell all your possessions and give the money to the poor, and you will have treasure in heaven. Then come, follow me”.) But that's not the message of the Bible at all! Jesus is showing us that the rich young ruler's sorrow [over the Lord's admonition to give his wealth away] is because the young man cherished his wealth over God; his wealth was more important than being willing to surrender his wealth and serve God.

Those who believe in the socialism economic model will condemn wealth as being unbiblical, and misquote 1 Timothy 6:10, which says, "For the love of money is the root of all kinds of evil", rendering it as "Money is the root of all evil". Pretty convenient mistranslation, isn't it? Notice how Satan has convinced mankind that money and wealth are the root of all evil, when the Bible clearly states that sin is the root that perpetuates evil in the world. In fact, it is not money that is evil, nor does God condemn wealth or the gaining of wealth. After all, Abram, King David, and his son, Solomon were all favored by God and they were extremely wealthy. It is the love of money that can lead to the sins of greed, corruption, and forms of unrighteousness.

Another example of wrongly identifying God's economic system with the world's is the tendency by some to state that Acts 4:32-35 advocates communism ... All the believers were united in heart and mind. And they felt that what they owned was not their own, so they shared everything they had. The apostles testified powerfully to the resurrection of the Lord Jesus, and God’s great blessing was upon them all. There were no needy people among them, because those who owned land or houses would sell them and bring the money to the apostles to give to those in need.  On the contrary, "the needy" in this passage were converts who had traveled to Jerusalem from foreign lands for the Passover feast days and after Jesus's death and resurrection, they decided to stay and learn more about Him and His Kingdom. They then found themselves in want, so those who had resources voluntarily shared what they had. Communism is an economic system that demands citizen participation and confiscates wealth from the producers. Additionally, nowhere in Scripture, do we find that this became the norm among Christian society. It was in response to a unique situation and displays a personal willingness to share with others out of the love of a consecrated heart for a fellow man.

And while the economic system of Capitalism can provide the wealth to serve others from our hearts, God will not bless this system if it is rooted in deception, greed, theft, special-interest influence or cronyism. Sadly, we, in the United States, have seen the effects of these sins upon our faltering economic system. But the tenets of Capitalism are evidenced in the Bible through freedom of choice in how we operate in our lives [including our businesses and means of financial support] when our enterprise is conducted with compassion, unselfishness and generosity. But since we still live in a sinful world, we won't see that model in its fullness until Christ returns and implements His Kingdom on earth in its fullness. Micah 4:4 gives us a hint of what that perfect world economy will look like ... Everyone will live in peace and prosperity, enjoying their own grapevines and fig trees, for there will be nothing to fear. The Lord of Heaven’s Armies has made this promise!

Until that glorious Day when the Lord returns with His perfect economic governing system [in which the residents of Heaven on earth will espouse the virtues of work, tithing, and sharing the blessings of God], we have one more economic system to endure ... the Mark of the Beast. Revelation 13:16-17 says, He required everyone—small and great, rich and poor, free and slave—to be given a mark on the right hand or on the forehead. And no one could buy or sell anything without that mark...

How close are we to experiencing that system? Perhaps sooner than any of us want to think! All I know is that we desperately need the biblical social and economic policies of Heaven here on earth NOW! I don't know how much longer before the Lord gets the go-ahead from the Father to mount up with the Host of Heaven and ride to defeat Evil once and for all. I don't know about you, but I am ready to receive Him on earth! I am ready for the earth and mankind to reflect God's ordained system of government in all its manifestations! I will not be consumed by fear of what mankind is scheming out of corrupted hearts and minds, but stay focused on the glorious future that awaits us when we see Jesus coming on the clouds. I choose to glorify the Lord in all the ways He leads me and trust in His provision in this world. Seek first the Kingdom of God and righteousness, and all your needs will be met. That's the key to enjoying God's economic system for us!

Philippians 4:19   And my God will supply every need of yours according to His riches in glory in Christ Jesus.