God, The Constitution, The Supreme Court, and Roe v. Wade 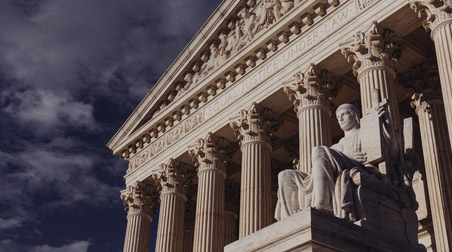 I'm going to begin this post by stating [very clearly] that I am not a Constitutional scholar.  I am a lover of American history and I try to look at all sides of our history from my Biblical worldview. That means that I've carefully considered the question, "Does the Bible have authority over the Constitution of the United States"?

We know that Article 6 of the Constitution states that "This Constitution, and the Laws of the United States ... shall be the supreme Law of the Land". So, what is our understanding of the origination of "Law"? From the foundations of the world, it is clear that a system of rules [called Law] was instituted to govern the actions of men. But who created Law? In the Declaration of Independence, our Founding Fathers gave credit to "the Laws of Nature and of Nature's God" that endowed men with certain unalienable Rights -- Rights given to them by their Creator -- and among them are Life, Liberty, and the pursuit of Happiness.

The Bible states that "the Lord is our lawgiver" (Isaiah 33:22); "the law is holy" (Romans 7:12); "the law of the Lord is perfect" (Psalm 19:7); and "the perfect law" is "the law of liberty" (James 1:25). At this point we can understand that Law is important to both God and to our system of government in this nation. In fact, just as God sits on His throne in the Heavenly Court as Supreme Judge over all Creation, we have a Supreme Court that plays a very important role in our Constitutional form of government. As the highest Court in this earthly realm, it is the last resort for those seeking justice. But what happens when our Supreme Court has been compromised by agreement with sin?

In light of the current volatile case before the Supreme Court, here's what I think the citizens of the United States need to consider: I don't think abortion advocates, the courts and judges of this land, and the Supreme Court of our nation have considered that abortion is the sacrifice of a baby for the benefit of the mother. The Creator God of the Universe has a legal entitlement to demand that we respect what He has created. And He has made His opinion well-known.  In Leviticus 20:2-5, He states,  “Say to the Israelites: 'Any Israelite or any foreigner residing in Israel who sacrifices any of his children to Molech is to be put to death.' "  Got it?  It is an act that the God who created me, you, and the baby has declared is abominable and worthy of death. Child sacrifice, in all its forms, is unacceptable to God. Period.

And so, I refer you to 1 John 3:4, which says, Everyone who practices sin also practices lawlessness; and sin is lawlessness [ignoring God’s law by action or neglect or by tolerating wrongdoing—being unrestrained by His commands and His will]. Isn't that exactly what we did in 1973 with Roe v. Wade, when the Court thought they could over-rule God? And isn't it what the Supreme Court did in 1992, when hearing Planned Parenthood v. Casey, they asserted that the right to an abortion was a liberty protected by the 14th Amendment? At the time, the Court stated, "[at] the heart of liberty is the right to define one’s own concept of existence, of the universe, and of the mystery of human life." To me, it sure seems like the baby isn't allowed a voice to define it's existence.

This most recent resurrection of Roe v. Wade before the Supreme Court of the United States (and the subsequent leak of Justice Alito's draft opinion) have sparked a firestorm across this nation. Sadly, this does nothing more than cause further division between pro-life champions and abortion supporters. The question now becomes will the Supreme Court Justices be swayed by political persuasions? And even more consequential, it is plain to see that both God and the Bible have become more irrelevant in our society -- indeed, despised.

Perhaps the more appropriate question is this: Is there enough of the Bible's influence in the Constitution to withstand its destruction by the Government?  Ultimately, as a faithful Christian, I have to go back to the one Truth that overrides all ... YHWH is Sovereign, Supreme, and the absolute Head of this State.  His Word is authority over everything man-made ... whether it is a governing document like the Constitution, or a governing body of men like the Supreme Court. That might not be the politically expedient answer to give in this time of division and rancor, but we are at the stage in this nation (and the world) where it is time to quit playing the political game, and recognize Who has the real Power in this world. We must pray that the highest Court in our land has enough courage and fear of God to uphold His righteous laws of Liberty and Justice.

Even if Justice Alito's opinion represents the majority of the Court, it won't solve the abortion question in its entirety. Each state would have the ultimate decision whether to allow abortions to be performed as part of their governing laws. But I know that it says in God's Word that He appoints rulers over nations by His authority, and we are to be loyal to that government... as long as they are loyal to His laws. I truly believe that God was involved in the creation of our Constitution through the men that He put in authority. At that time, these men foresaw a nation of individuals who were generally governed by Biblical precepts -- checks and balances and a limited government were at the center of the Constitution, and would serve such a Biblically-minded society well. Then, as now, I believe that the Bible has authority over each of us as individuals, and the Constitution has authority over the government. That combination has worked for us for 246 years, and contributed to a generally balanced co-existence among individuals and government, as long as this nation continued to embrace Biblical morals and principles.

So, I pray for the nine Justices who are caught in this quagmire of deceit and subterfuge. I pray that they will be led by moral consciences and not persuaded to abandon their sacred duty to the people of this great land. We stand on the precipice of rule by lawlessness, and we know what the Bible says that leads to!