Will Artificial Intelligence and the false god of Technology Replace Jehovah? 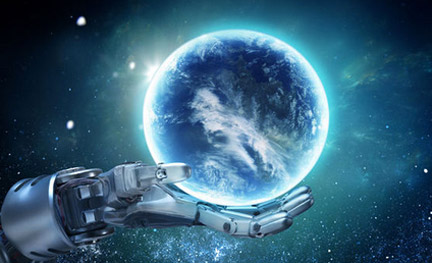 No, I'm not trying to be snide or sarcastic. It's a very real question that came to me as I read an article at The Christian Post by Assistant Editor, Leah MarieAnne Klett. In her article, she interviewed theologian and author Wallace Henley. In the article, Henley made this impactful statement: "We are all made for transcendence, God’s overarching glory. As Solomon said in Ecclesiastes, God has put eternity in our hearts. St. Augustine said, ‘The human heart was made by God for God and only God can fill it.’ And if we don't fill it with God, we fill it with whatever else we can find … that's what all idolatry is about. The idolatry of the future is going to be the worship of these machines, which has already started, either tongue-in-cheek, or some people literally [and very seriously] worshiping the works of their hands."

In other words, we were created as incomparable beings [without equal] by God to spend eternity with Him, and worshiping Him only. Eternity with God is literally part of our DNA. But there are scientific men and forces who want to dethrone the Most High God, the Creator of the Universe, and replace Him with a creation of their own. That is called idolatry and results in the worship of false gods. And Mr. Henley warns of the spiritual crisis that is coming [and in reality, is here] as mankind approaches the ultimate idolatry, worship of the machine. This became quite clear, when he heard a technology specialist make the following disturbing statement: "He said, if there is a machine that can go a billion times faster than the human brain, then the only thing we can call it is God.' "

Please don't consider that statement lightly. In 2014, I wrote about the international Global Future Congress 2045. The focus of the Congress that year was "a discussion of a new evolutionary strategy for humanity aimed at overcoming the 21st century's civilization challenges. The strategy is based on carrying out two revolutions: spiritual and sci-tech. We believe this is the only way to overcome existing crises." As I wrote then, being a very spiritual-minded Christian myself, I wanted to see if these scientific minds could, in any way, mirror my concept of spirituality and God. That question was answered in the very next statement of the Congress's objective: "A vision will be presented for the spiritual transformation of humanity, and new technologies will be demonstrated which are likely to form the basis of the sci-tech revolution. The Congress will also showcase our Avatar science mega-project, aimed at accelerating the creation of technologies enabling a gradual transition from our biological bodies to an increasingly advanced artificial carrier of the human self."

That should be chilling to any Spirit-filled follower of Christ! There are so many implications here, and these statements were made in the summer of 2013! How far down the road have these "scientific minds" come in developing possible ways to "transform humanity"? Frankly, it's eerily mindful of the "follow the science" mantra we've heard the last couple of years throughout the virus crisis. And we're yet to find out the long-term effects of that "science"! Are we going to see a meeting of the minds between the health scientists and the technology scientists, resulting in our spiritual transformation? It is incumbent upon us, as God's magnificent creation to be mindful of the ethics of these experiments and developments.

We are already seeing Artificial Intelligence assuming many of our human tasks -- everything from vacuuming to assembling cars. And human dependency on machines has become so celebrated that we hardly recognize the dire implications -- just think about the rush for the latest version of iPhone. Wallace Henley brings up an important consideration: Who is going to design the ethics that go into these machines? What is the spiritual nature of that person? Could there be, at some point, the elimination of the directive inside that machine that says, "Thou shalt not kill"? What if the machine decides that we, the human race, is the problem, and to maximize its utility, we need to be removed?

That may seem extreme, and highly unlikely, but isn't that a possibility as our society and the world continues to move towards the worship of technology over our reverence for God? Doesn't that make technology an idol, and the machines "little g" gods? And if you think we have advanced beyond the nature of the Israelites who followed pagan gods and sacrificed to false gods; or the Greeks and Romans who worshiped their gods of war and fertility and prosperity... what makes you think this generation isn't capable of worshiping the gods of technology?

Just consider what I discovered when researching the likelihood that Technology has become a god. I asked the question, "Is there a god who could be considered the god of Technology" and found a website that posed that very question. Here are some of the answers ... One young woman, who called herself a practitioner of witchcraft, stated the god Ogun's domain was technology; everything from teaching birds how to build nests to teaching humans about computers.  Then there was this interesting opinion: a woman who identified herself as a sorceress and consort of another foreign god, who stated that she ascribed to the belief that society creates new gods to control the forces of new things. "So perhaps Tesla can be considered the god of Technology. Or perhaps Technology itself is an entity deified by our reliance on it". [I'm sure she has no idea how close she is to the truth]. And finally, there was the opinion of a practicing witch and Norse polytheist: "Perhaps Hermes? As the messenger of the Olympian gods, he was tasked with the transmission of messages from god to god. Nothing does that task better than instant messaging and social media".

Can you see how easy it will be for the masses who do not know our Sovereign Lord to fall into idol worship? As Scripture says, in Psalm 115:4-8, Their idols are silver and gold, the work of human hands. They have mouths, but do not speak; eyes, but do not see. They have ears, but do not hear; noses, but do not smell. They have hands, but do not feel; feet, but do not walk; and they do not make a sound in their throat. Those who make them become like them; so do all who trust in them. The Bible tells us that the ancient people created and treated these idols as real beings. Haven't we done the same with Siri and Alexa?

This is a very serious subject matter that the Body of Christ needs to address! Yes, we are to concentrate on sharing and spreading the Gospels of Salvation and the Kingdom of God, but this is an invention that we have allowed to develop [and have become dependent upon ourselves] that threatens to rule us -- or at least become a weapon in the hands of the Anti-Christ to control us physically, emotionally, and destroy our spirituality and relationship with God. As part of my final comments in that 2014 blog post, I wrote that a pivotal objective of the Avatar project of the Global Future Congress 2045 was to become "a positive contribution to building the world as it should be". Not, mind you, as our God would will it, but as these Godless men and women would design it. Their goal was then -- and is now -- to bring new earthly innovations to a science lab near you! We must not be naive Christians to the influence that science and technology have on our society, and, as Spirit-filled Christians and ambassadors of God's Kingdom, be naive of the plans to make AI the object of our worship. We must not let our guard down. And we must acknowledge the One True God in all our ways!

Habakkuk 2:18   What profit is the carved image when its maker has formed it? It is only a cast image, and a teacher of lies. For its maker trusts in his own creation [as his god] when he makes speechless idols.