Christians: Why It's Important To Have An Answer! 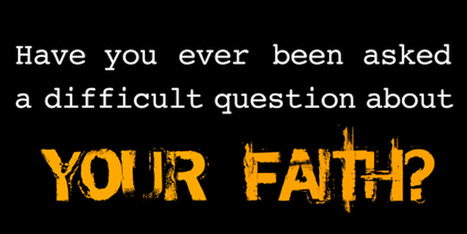 I'm sure you've all had this experience .... a skeptic of our faith asks a question about the Bible or Christianity and you don't have an answer for them. For my husband, it was a non-believing friend asking him where the dinosaurs fit in the Bible narrative. That's not an unreasonable question. And I would surmise that the number one question asked is, "How can you believe in a God who tells his followers to kill every man, woman, child, and animal in a different tribe"? Could you answer that question? Because if you are trying to share your faith with the lost world, I can guarantee you will get those kinds of questions from all kinds of people -- atheists, agnostics, skeptics, and people genuinely searching for something to believe in. But if we can't defend what we believe, and why we believe it, then we are going to miss opportunities to bring the lost into the Kingdom of God.

Mark has stayed in touch with our friend with the dinosaur question, and has regained his trust that allows Mark to speak into him, but he's a slow move towards accepting Christ because the world provides all his carnal needs. But because Mark felt he squandered an opportunity to introduce our friend to the complexities and glory of God, this experience was the impetus for both of us to become serious about studying the Bible and being able to explain and provide reasonable proof and answers [according to Scripture] as to why we believe what we believe. As to the question regarding the commandments of God to destroy entire people groups, one aspect of the complex answer is this: When Satan tempted Eve in the Garden, God declared to Satan, "I will put enmity between you and the woman, and between your offspring and her offspring". The Hebrew word used instead of "offspring" was "seed". In effect, God is saying that there is going to be a genetic component to this war on earth between His Kingdom and the devil's kingdom. We see the first big impact in Genesis 6, when fallen angels impregnated earthly women, who give birth to the Nephilim (half fallen angel/half human) giants. These hybrids were NOT created according to God's will, and are NOT made in His image. But they were part of Satan's plan to see that Jesus had no pure blood line to be born into. If Satan could corrupt the gene pool of humans on earth, then he could stop God's plan to provide us with a perfect and sinless Savior to deliver us from the wages of Adam and Eve's sin, which is Death.

Throughout the Bible, God is committed to saving His chosen people from their own destructive behavior. He wanted to keep them sanctified and protected from the influence of nations, tribes, and peoples who followed the ways of Satan through their demonic idols, perverse sexual taboos, and the abhorrent sacrifice of their children. That's why He instructed them to not intermarry with these pagan, ungodly foreign peoples. That would only add to polluted bloodlines and lessen the possibility of Jesus's pure birth. Yet, they did anyway, which led to wicked influences and continual rebellion. Scripture tells us that "every intention of the thoughts of man's heart was only evil continually. And the Lord regretted that He had made man on the earth, and it grieved Him to his heart" -- so much so that He decided to "make an end to all flesh", [both human and animal]. The Flood was designed to do that, leaving only Noah and his sons and their wives to repopulate the earth. Yet we know that wickedness rose again quickly upon the earth, and we find Abraham fighting giant kings, and the rise of Nimrod, who "began to become a mighty one on the earth". Many of the legends of antiquity paint Nimrod, who was likely born just 70 years after the flood, as a giant of a man; rebellious, tyrannical, and a warrior-king who modeled himself after the wickedness of the Nephilim. That spirit of rebellion has permeated the earth ever since.

So, when presented with a monumental question such as "Why would a loving God seek to destroy humans", we must be knowledgeable of not only Scripture and history, but of the character and nature of God, and be able to express how the battle between God and Satan is still waging today. We must be able to demonstrate the truth that God's plan of redemption and reconciliation with mankind was based on sending our Redeemer, Jesus, as the pure sacrificial offering to atone for all of mankind's sins. We must be able to explain that Satan has remained just as committed to maintaining his dominance and rule in the earth. The ungodly bloodline which began in Genesis 6 was the beginning of centuries of Satan's attempts to manipulate and corrupt our godly genetics and human makeup in order to keep mankind from being restored to our relationship with our Creator.

We only have to look some 80 years ago to see the same satanic actions of Dr. Josef Mengele to "conduct genetic research" on the human occupants of Hitler's death camps. He was known as the "Angel of Death" and sought to pervert God's creation with his diabolical experiments. Today, it is important that we understand the implications of what Scripture reveals in this "seed war" between God and Satan. We must be mindful of Satan's agenda as we spiritually discern the objectives of modern science and genetic research. Anything that seeks to change our DNA should be suspect, and we must be willing to look upon everything with a heart to defend God and His divine plan of Creation and Eternity. And our hearts must be rooted in love for our fellow man as we gently, yet persuasively lead them to God's Truth.

There is so much more I could say about the questions that are intended to diminish our faith and its influence on our modern society and culture. It saddens me to see how lax we've become in truly knowing the Truth of the Bible in order to not only defend our faith, but to exert Godly influence in the lives of people who are growing more cold every day. How did we so easily relinquish the Christian influence in this nation? I pray that the remnant who recognizes where we are on God's timeline will assert their voices and proclaim our firm trust in the knowledge of Him and His ways, so that we might silence all doubt and unbelief when questioned about our faith.

Those who attack our God and faith are well-versed in how to debate against our belief system by using arguments centered in moral relativism, humanistic doctrine, and the tenets of their false religions. We, as Christians, must be able to represent our beliefs with answers and evidence based not only on the Bible, but through sound logic, and verifiable observations and experiences, as well as intellectual resources. We don't need to be experts, but we should be able to speak from a spiritual confidence as to the what, why, when, where, and how we find our hope in Jesus. Our reasoned response may very well be the inspiration or encouragement for a soul to seek his or her Creator and Savior. Defending our faith with love and boldness should be the high calling of every follower of Christ.

1 Peter 3:15   ... sanctify Christ as Lord in your hearts, always being ready to make a defense to everyone who asks you to give an account for the hope that is in you, but with gentleness and respect;