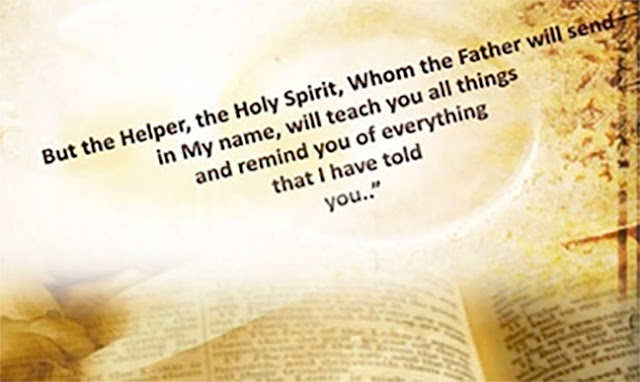 Do you ever have that spiritual discernment when you know that God is tapping you on the shoulder and reminding you of something that He has disclosed to you long before? It's as if He's saying, "Do not forget what My Holy Spirit imparted to you; all revelation is for My purpose in due time". In fact, the Bible confirmed this for me in 2 Peter 1:19-21 ... So we have the prophetic word made more certain. You do well to pay [close] attention to it as to a lamp shining in a dark place, until the day dawns and light breaks through the gloom and the morning star arises in your hearts. But understand this first of all, that no prophecy of Scripture is a matter of or comes from one’s own [personal or special] interpretation, for no prophecy was ever made by an act of human will, but men moved by the Holy Spirit spoke from God.

So, I sit here today, amazed at the work of the Holy Spirit, connecting my time in prayer yesterday with four Godly women, to an anonymous comment on a post I was inspired to write nearly ten years ago to the day. Our prayer time yesterday was focused on crying out to the Lord in repentance for how far our nation has fallen from its original purpose in God's plan for the nations. We enjoined our Father to intercede on behalf of His remnant who still recognize who this nation is in the Spirit. We declared that we would not submit to the Enemy's agenda or strategies to destroy the holy covenant made at the dawn of this nation's discovery, nor the profound faith the Founding Fathers had in Divine Providence to deliver our new country of America from what seemed like certain defeat at the hands of the British Empire.

We admitted that we were not blind to the sins of our nation or our fellow countrymen, and we were not naive regarding the unholy covenants and intrigue in which those placed in authority over us have engaged. But we confessed our belief in our God to restore and reestablish covenant with His righteous remnant. We asked for the Blood of Jesus to purify the land and cleanse the hearts of the wicked, returning it all back to God's original design for our Republic. We upheld the fervent prayers of our historical forefathers as they sought to establish what had never been accomplished before ... a land born for personal liberty and freedom; the same tenets that Jesus proclaimed as His purpose: setting the captives free; healing the blind to see; and giving liberty to the oppressed and downtrodden. We asked that our captivity in modern-day Babylon be ended, and we be allowed to receive His blessings of prosperity, hope, and a redeemed future.

As I drove home from that prayerful time, my spirit was refreshed, but I knew we could not let up. We have committed to consistently meet to hear from God on how we are to execute our assignments in His Kingdom and strategize as His spiritual army of Heavenly representatives on earth. I was reminiscing how far down this path we have come since the Lord spoke to me about writing this blog. He asked me to be obedient to share what I heard Him say in the times of disquiet and, yes, even despair in my soul. So, imagine my amazement when I checked my blog to see if there were any comments I needed to respond to, and I received this comment on a post titled, Jeremiah 2:20-21. The anonymous reader wrote these three concise sentences: "Ten years have passed since this posting and things are worse. God will not be mocked. He will always have the last Word".

I knew it was the Holy Spirit prompting me to revisit what He inspired me to write so long ago, and it is a message for all Americans. So, I wish to implore you with the same appeal as the Angel of the Lord spoke to George Washington in the middle of a bitter winter in 1777, "Son of the Republic, look and learn".  So, now, Sons and Daughters of this Republic and the Most High God, I invite you to read the following ten-year-old prophecy from the Lord that I have been reminded to share...

From March 4, 2012 ... Although God prophesied to the nation of Israel about the coming judgments due to their disobedience to Him, I sense that our own nation has fallen away from recognizing the part that Divine Providence played in the founding of this great nation.  Indeed, George Washington, himself, acknowledged this concept when he said in his First Inaugural Address, "No people can be bound to acknowledge and adore the invisible hand, which conducts the affairs of men, more than the people of the United States.  Every step, by which they have advanced to the character of an independent nation, seems to have been distinguished by some token of Providential agency."

Alas, I am afraid, as Jeremiah 2:20-21 charges, that we have "broken off this yoke and tore off our bonds" to this "invisible hand".  We have removed Him from our schools, our town squares, our houses of Law, and are increasingly diminishing His true voice, even in our churches.  Within the halls of our Government, and throughout our Literature and the Arts, we have declared, "I will not serve You!"

We have sacrificed our morals, values and principles for the sake of tolerance, greed, and popularity. Indeed, like a prostitute, we have cheapened and perverted who we were as a nation; we have abandoned the true meaning of "equality" and "liberty" and lowered the standards in which we were rooted.

Divine Providence blessed us with a unique opportunity....we were planted "like a choice vine"; the first nation in the history of the world founded on the principle that "all men are created equal".  We have traded self-sufficiency and liberty for entitlements and servitude.  Is it really that hard to imagine God questioning, "How then did you turn against me into a corrupt, wild vine?"  Can you deny that God has every reason to pull up such a profane and dishonorable root?

As in the case of the nation of Israel, God will not be patient forever.  It is time to recognize our decline and set things back on the path towards reclaiming our heritage.  In the words of President George Washington, in his First Inaugural Speech, "The propitious smiles of Heaven can never be expected on a nation that disregards the eternal rules of order and right, which Heaven itself has ordained."

That is what I wrote then; it is not a prophecy that was imagined by my own mind or will; I did not not write my own interpretation of what I heard the Holy Spirit say, but just transcribed what I heard in my spirit on that day. And I have dutifully recorded a Scripturally sound comment from someone who stumbled upon a ten-year old post. Is that anonymous reader giving us a word of knowledge from God, Himself? I don't pretend to know that answer. But I do know that the comment speaks of God's truth. He will not be mocked. We have been created and placed here, in the greatest land on earth, in this particular time of history, to represent God's purpose in His plan of redemption. Those seeking to pervert His purpose and power can try to convince themselves that they have the better plan, but God will have the last Word!

So, please .... wherever you are; whether you are able to gather in numbers large or small, please join our small group of praying women to ask Jesus to show us the way to reclaim our nation for His Glory! Let us be eyewitnesses to His miracles of the restoration of our land, the reinstitution of righteous government, and the realignment of men's hearts with the Father's. It's not too late! Maybe that's why I received that "anonymous" comment ...

Jeremiah 2:20-21     Long ago you broke off your yoke and tore off your bonds; You said, 'I will not serve you'! Indeed, on every high hill and under every spreading tree, you lay down as a prostitute. I had planted you like a choice vine -- of sound and reliable stock. How then did you turn against me into a corrupt, wild vine?