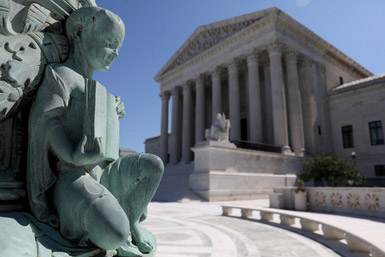 God is taking particular interest in the affairs of our nation this week. Today, the Supreme Court hears oral arguments in regards to a Mississippi law that bans abortion after 15 weeks and is a direct challenge to Roe v. Wade. Furthermore, America awaits the Court's ruling on Texas Senate Bill 8, which bans abortion at the first sign of cardiac activity in a fetus, which is typically around six weeks. Both rulings will have significant impact on the future of this nation, as well as the spiritual consequences of these momentous decisions.

We are moving in the right direction, legally, but I'm not sure that is enough for our righteous God. According to the Centers for Disease Control, there is an abortion in the United States every 37 seconds. But based on the statistics we have received over the last two years from this federal agency during the Covid crisis, I'm not sure that is an accurate number, but I digress. Anywhere near that frequency is an abomination to the Creator of each of those babies!

Frankly, it amazes me just how much the landmark Roe v. Wade decision in 1973 has become lionized. It's only been 48 years since that iniquitous decision, yet it is seen as a bedrock verdict for the right of every woman "to choose an abortion before viability". And the real question centers around when does fetal viability begin? The clinical definition of viability is "the ability of a fetus to survive outside the uterus. Fetal viability is generally considered to begin at 24 weeks gestational age, since at this point in the pregnancy, most infants survive a preterm birth." If my calculations are correct, that is around the 6-month mark, which is right before the third trimester. A nation that would make it legal to end the life of a 6-month-old fetus has no claim to righteousness!

Anyone who has seen 3-D images of a fetus in utero knows that they are witnessing a human being on that ultrasound. And for those of us who believe in the sanctity of life, we know that from the moment of conception, the spirit of Life is present in those cells. And it is a great offense to the Creator of Life to suggest that life does not exist at that stage! Sadly, our fixation with a mother's right to murder her child has become "a right"; an entitlement, a privilege. Furthermore, it is a form of child sacrifice that has been practiced throughout the ages of the ancient world. There are those who would argue that the sacrifice of children was part of an act of worshiping pagan deities such as Molech and Baal, and belongs to the very distant past. They would also contend that that practice has no connection with the choices made by modern 21st Century women.

But it is as much a ritual today as it was thousands of years ago. The Canaanites may have been paying tribute to fertility gods, or seeking favor from gods of the harvest, or even obtaining a blessing from a vow made in the name of a god -- but it was ultimately for the benefit of the adult's life; it was done to bring advantage to their existence. Nothing has changed. Abortion in today's world accomplishes the same thing. It benefits the life of the mother; whether it is done for convenience sake, to avoid poverty, or to eliminate the consequences of a horrendous sexual sin against the woman. I believe it is never an easy decision. And it shouldn't be. Life is a gift from the One who created each of us -- no matter the circumstances under which that divine light results in conception.

But there is another aspect of abortion that my spirit grieves. I understand that we were created as spirit beings in the image of God, and I know that we were "chosen in Him before the foundation of the world, that we should be holy and blameless before Him" (Ephesians 1:4). I believe that each of us is sent to this earth to represent His righteousness in the world, bringing the knowledge of Him and His character and nature to those who don't know who they were created to be... all for the glory of the One who created us. So, I think of the millions of spirits that were knit into wombs and never got the chance to discover and accept their identity, and instead were sacrificed to the lies that they were mere cells, and disposable and expendable.

So, the fact that it has only taken 48 years for this egregious act to become normalized in our society is the reason that the decisions made by the Supreme Court carry so much weight this week. It shows how far off track we are from God's will for humanity and for our nation. It is possible that these decisions will tell us if we survive the near future. We would do well to discern that the kingdoms of Israel and Judah's fall into idolatrous child sacrifice eventually became part of the reason God sent them into the Assyrian and Babylonian captivities. King Solomon turned his heart to the pagan gods of his foreign wives; King Manasseh offered his own son as a sacrifice and so did King Ahaz. The bottom line is this: God hates the shedding of innocent blood. It is clear in Proverbs 6:17 ... There are six things that the Lord hates ... and among them is "hands that shed innocent blood".

We are no different than the Israelites described in Psalms 106:38 ... They shed innocent blood, the blood of their sons and daughters. By sacrificing them to the idols of Canaan, they polluted the land with murder. It is a fact that our land is polluted with the blood of innocent babies. And God is not only grieved, but filled with righteous anger. We have been a blessed nation for 245 years, and we are naive if we do not think God is watching how the Supreme Judges of our land rule, beginning today. I cannot stress enough how important it is that we all be praying today and that God hears our petitions to change the hearts and minds of the nine men and women who sit on the highest Court in the Land. Father, we fervently repent for the murder of millions of your children! We bow before You, humbly asking for forgiveness, and seeking Your guidance and wisdom to help turn this nation back to You. Do not forsake us, nor turn Your back on us! We hear the blood of these innocents crying out for justice, and we join our prayers with their righteous appeals! Deliver this nation from the abomination of abortion, in the Mighty Name of Jesus!

So, please join me and the millions of Christians who understand exactly how important today's oral arguments are, and that what this nation decides to do in the coming days to safeguard the lives of the unborn will have everything to do with whether America exists in the near future. But it is not for our safety that we pray; it is for the sacredness of Life and the right of every unborn child to live his or her divine destiny in the world. Please, Father, we pray for sanctified wisdom in our judicial branch of the government and that Your will be done today! Amen!

Ezekiel 20:31    For when you offer gifts to them and give your little children to be burned as sacrifices, you continue to pollute yourselves with idols to this day. Should I allow you to ask for a message from me, O people of Israel? As surely as I live, says the Sovereign Lord, I will tell you nothing.