America's Greatness As Defined By Her History - Part One 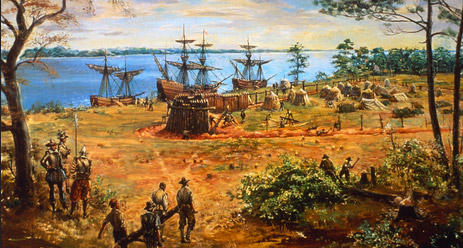 Today, I find myself immersed in one of my great loves ... the study of early American history. When I was a child, as soon as I could read books with any depth, I devoured everything I could lay my hands on regarding the founding of our nation and the American Revolution. In fact, I was so inspired by the bravery and fearlessness of the early colonists and patriots, that I often wished I had lived during that promising period of our history. The challenges they faced in determining our national identity, form of government, and fabric of society were monumental by history's standards. Yet, what we ended up with has been a beacon of hope and potential for the entire world.

And so, in a desire to revisit the founding character of America, I am taking a free online course from Hillsdale College, called "The Great American Story: A Land of Hope". For those unfamiliar with Hillsdale, it is a private conservative liberal arts college in Hillsdale, Michigan. Founded in 1844 by abolitionists known as Free Will Baptists, it has a liberal arts curriculum that is based on the Western heritage as a product of both the Greco-Roman culture and the Judeo-Christian tradition. It operates independently of government funding and prides itself on instilling the timeless truths of Learning, Character, Faith and Freedom in its students.

The Great American Story: A Land of Hope is taught by Professor William M. McClay, and I yearn for this course to rekindle my soul with the spark of pride and enthusiasm for my country; to once again discern God's divine intervention that my childish mind and heart were convinced were present at the founding. Dr. McClay is the Victor Davis Hanson Chair in Classical History and Western Civilization at Hillsdale College. He received his Ph.D. in history from Johns Hopkins University, and is therefore quite qualified to teach on this subject. I am only two lessons into the 25-lesson course and am already reinvigorated with how the distinguished American DNA was created, and I will be writing on the rediscovered principles of how unique the American experience has been. I see God's hand on our history and pray that He has not yet removed it!

As excited as I am about recognizing the providence of our existence, I am also greatly saddened at seeing how it has deteriorated. But first, I want you to clearly discern the meaning of that word providence. It was a word that George Washington often ascribed to the good fortunes of the new nation: "Glorious indeed has been our Contest: glorious, if we consider the Prize for which we have contended, and glorious in its Issue; but in the midst of our Joys, I hope we shall not forget that, to divine Providence is to be ascribed the Glory and the Praise." The word providence means the protective care of God or of nature as a spiritual power; it is God's will, His divine intervention, and His predetermination. As I hope to share in coming blog posts, we have received incredible favor from the God of the Universe in our short history. We are unique, and even through our mistakes and errors, we have, for the most part, remained great.

Just consider the ways in which America defied the conventional methods by which countries and nations had come into existence. American history is significant and consequential. If, as many history and Biblical scholars contend, the Roman Empire was the human political entity that God used to prepare the world for the birth of the Messiah and for the spread of the Salvation gospel, then the founding of America may be just as equally significant. The founding of America was intended to be something new and an improvement on older nation empires because it began with an amazing mixture of radical ideas that encompassed things humans had hoped for for centuries; and there was the incredible opportunity to make it happen.

Among that mixture of ideologies was a faith in a Biblical God (for most of them); a knowledge of the Classics; and an acquaintance with the different forms of government that were available. Or, as Dr. McClay says, "They brought the whole meaning of a civilization with them to a new place and then they started over. They brought everything but the aristocracy". And that made a fundamental difference in the structure of America. The underlying theme of America is that it is an innovative idea; a land of hope; a land of refuge; a land of opportunity for everyone; it represents a second chance. And above all else, the hope of America is a spiritual concept.

I totally believe in the premise of that last line -- America is great because America is good, and if America ever ceases to be good, America will cease to be great! For me, it is impossible to consider this quote without taking a look at how well we are preserving those lofty attributes. Is the greatness and genius of America still evident in the fertileness of our fields and in our rich mines? Or have we handed over the production of our resources to demagogues? [By the way, the definition of a demagogue is "a political leader in a democracy who gains popularity by arousing the common people against elites, especially through oratory that whips up the passions of crowds, appealing to emotion by scapegoating out-groups, exaggerating dangers to stoke fears, lying for emotional effect, or other rhetoric that tends to drown out reasoned deliberation and encourage fanatical popularity].

And what can we say about our world commerce/trade? Are we still great and exemplifying genius, or have we outsourced all that to foreign nations? What about our public school system or higher institutions of learning? Seems to me that ever since we removed God and His providence/protection from our education system, we are less great and certainly don't look like geniuses. And can we honestly say we still honor the democratic process of government or the supremacy of the Constitution in carrying out our rule of law? The last few years have seen a rapid decline in the original intent of both. Finally, do our pulpits flame with righteousness, or have we substituted preaching the justice, mercy, and love of a righteous God for compromising with the world and our 50l(c)3 overlords? We need to return to the thoughts of those who saw the original vision for this country -- they met situations as dire and serious as our own [including threats from foreign powers, plagues, and domestic division] to make their hopes prevail. We need to know how they did it! There is value in preserving and studying our history. And revising history for the sake of cerebral conflicts with changing modern standards not only modifies truth, but threatens our greatness.

So, as I draw to a close in this beginning dialogue about the greatness of America, I want to leave you with two quotes. The first is by Dr. McClay, himself: In times of change and danger when there is a quicksand of fear under men's reasoning, a sense of continuity with generations gone before can stretch like a lifeline across the scary present and get us past that idiot delusion of the exceptional NOW that blocks good thinking. The second quote is by John Dos Passos, an American writer, and one of the major novelists of the post-World War I “lost generation,” who gained a reputation as a social historian and as a radical critic of the quality of American life: That is why, in times like ours, when old institutions are caving in and being replaced by new institutions not necessarily in accord with most men's preconceived hopes, political thought has to look backwards as well as forwards.

Can America retain her Goodness, and therefore her Greatness? It is evident that forces, both spiritual and in the physical world, are desirous of ending her prominence on the world stage. Can we re-ignite that flame of individualism and God-given rights and purpose that were the origin of our founding? Can we look back and embrace what was good about the original vision of America; that we honor the God whose protection allowed for the creation of a nation that believed in the rights of life, liberty, and the pursuit of happiness. Can we learn from the eradication of evils we allowed to stain our history; how to conquer slavery of men and establish self-rule and independence, while remaining in union with each other? And can we agree that Governments exist solely for the purpose of protecting our God-given rights; that they derive their powers from the consent of the governed, not from the self-declared rights of self-appointed Kings?

We are at a crossroads in our national history. We can still see and remember the origins of our founding. But the forces that would erase those memories are actively engaged in changing our history and instituting new principles. I am so happy to have this course as a reminder of who we used to be, and who I believe we can still be. Join me in praying for God's continued protection of this great nation that was clearly founded on His principles and with His approval. Ask Him to forgive us our trespasses and restore our righteousness, as we walk in our purpose for this nation and the world!

Jeremiah 29:11    For I know the plans and thoughts that I have for you,’ says the Lord, ‘plans for peace and well-being and not for disaster, to give you a future and a hope.
Posted by Pam Kohler at 5:30 AM