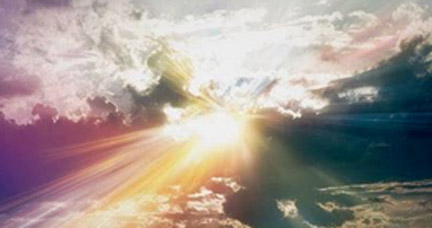 I recently received a comment on a post I originally wrote in 2012 concerning Acts 17:26-27. The comment was concise and brief ... "Holy Spirit anointed!" First of all, I was kind of amazed that someone would stumble upon a nine-year-old post. But as I re-examined what I wrote, I was curious as to what the Holy Spirit was showing me at the time, and wasn't surprised to note that the message then is the same for us today. So, I'd like to re-post it, along with new insight and counsel from the Spirit.

Acts 17:26-27 says this: From one man, He created all the nations throughout the whole earth. He decided beforehand when they should rise and fall, and He determined their boundaries. His purpose was for the nations to seek after God and perhaps feel their way toward Him and find Him—though He is not far from any one of us. Have you ever given thought to just what an amazing statement this is?  When I consider it, my understanding comes on different levels. First, I am astounded by the Creation; that from one man, Adam, all the nations (or every single person) have descended and populated the entire world. God has determined not only when each human being would be born, but where he would be born, his circumstances, and the boundaries of his life.

The Scripture says that He did this so each man and woman would seek Him; would reach out and find Him. Then the passage reminds us that He is not far away from any of us. We have the ability to seek Him because God instilled, within each of us, the knowledge that there is a Creator and the desire to know Him.  It just blows me away that every living being on this planet has the innate ability to seek that relationship. You may not have the knowledge of what to call Him (I'm thinking of those proverbial natives deep within some remote and undiscovered jungle); but you still know that there is a Power that you owe your life to, and it is awesome and fearful. The challenge to obtaining this knowledge is to know the true identify of this Creator God. We are each born because He has determined it; and there is a purpose for each life --- to revere Him, to obey Him and to serve His will -- to serve only Him!

But we must never forget that the Creator then gave us a great gift; the gift of Free Will. He also knows the beginning and the end of His creation, including the nations and lives of men. Hear what God says through the prophet Isaiah: I am God, and there is no one like me; declaring the end from the beginning and from ancient times things not yet done, saying, “My purpose shall stand, and I will fulfill my intention...” (Isaiah 46:9-10). Because God knows all, He knows what the actions of men and nations will be. And because nations act out of the free will of men, God has "decided beforehand when they should rise and fall". And yet, we have hope because as the Word says, His purpose shall stand, and He will fulfill His intentions!

It is not pure happenstance that Empires have come and gone throughout history. God's hand has been in the rise and fall of each world power, and the extent of their dominance and influence have all served His plan and purpose. You can see it in the Biblical stories of Kings such as Nebuchadnezzar, Cyrus, Darius and Antiochus IV.  Whether good or evil, each one was used to further God's plan for His world.

Do you remember what we studied in Junior High World History classes?  I loved learning about the Spanish Armada and the fact that "the sun never sets on the British Empire."  I was mesmerized with the historic battles between the British and the French over who would claim rulership of the North American continent. These events were presented as ancient, almost romantic, tales of world history. But now I see that they were just a continuation of God's action in determining "their appointed times" and "the boundaries of their lands." Leaders and rulers and nations don't come into existence and then disappear solely due to their own efforts. God is constantly working out His plan!

So what makes we Americans think that we are above the fate of any other nation?  Can we not see that God planted this nation Himself?  And do we not think that our blessings and protection can be removed just as other nations/empires have experienced? It is important to note that the Northern Kingdom of Israel [which included 10 of the 12 tribes that originated with the sons of Jacob] were taken into captivity and essentially became lost to history. But in 2 Kings 17:7-23, the Lord reminded them of why judgment came. Here is a synopsis of their actions: For so it was that the children of Israel had sinned against the LORD their God ... the children of Israel secretly did against the LORD their God things that were not right ... they did wicked things to provoke the LORD to anger, for they served idols, of which the LORD had said to them, "You shall not do this thing" ... Therefore the LORD was very angry with Israel, and removed them from His sight; there was none left but the tribe of Judah alone ... So Israel was carried away from their own land to Assyria, as it is to this day.

The Bible is full of the disobedience and judgment against the historic nation of Israel, who is God's favorite of all the nations He has spoken into existence. When they abandoned Him for false idols and removed His influence from among their culture, they secured their fate. Their enemies were allowed to defeat them. If they remained stiff-necked and unrepentant, they sealed their fate by rejecting God's statutes and abandoning the covenant He had made with them. But when they repented and returned to Him, God would forgive them of their sins and they dwelt in the land in peace and prosperity.

The same holds true for us; both as individuals and as a nation. God instilled something in each of us and in our cultural history; the knowledge that He created us. No matter what anyone says ..... that you exist because of evolution, or that the United States of America is not a Christian nation .... the truth is that our spirit and our land were ordained by God. And all He wants is for us to acknowledge our relationship and keep the connection by obeying His statutes and following His principles; remembering the testimonies of His presence in our lives and the history of this nation. As the Scripture says, He is not far away.

Yet it often feels as if we have taken ourselves far away from Him. The forces of evil that are desperately trying to divide this nation have sown seeds of racial hatred, sexual perversion, and occultic wickedness across our land. I am heartened by those who refuse to fall prey to the lies of satan, and boldly stand in defense of God's ways. I believe that we, here in America, can reclaim our destiny and be declared a Sheep Nation. Those with eyes to see recognize that the kingdoms of this world are collapsing, and the Kingdom of God is manifesting in the fore-ordained time set by God. So, knowing the sovereignty of God to decide when and how nations shall rise and fall, let us, as citizens of both this nation and Heaven, engage in holy behavior, living lives that set us apart as Believers, displaying our profound reverence for our awesome God! In doing so, we will constantly be seeking Him, and will most assuredly, find Him -- and He will sustain us and preserve us!

2 Peter 3:17-18   Therefore, [let me warn you] beloved, knowing these things beforehand, be on your guard so that you are not carried away by the error of unprincipled men and fall from your own steadfastness [of mind, knowledge, truth, and faith], but grow [spiritually mature] in the grace and knowledge of our Lord and Savior Jesus Christ. To Him be glory (honor, majesty, splendor), both now and to the day of eternity. Amen.

Email ThisBlogThis!Share to TwitterShare to FacebookShare to Pinterest
Labels: Divine Judgment, Free Will, Judgment of God, Obedience, Sheep Nations, Sins of our nation