La Palma: Tied To U.S./Israeli Policies? A Look Back At History 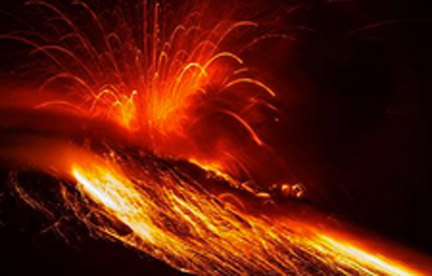 Get ready to put your tin foil hat on today! There is an interesting natural phenomena happening off the northwest coast of Africa on the Spanish Canary Island of La Palma. In case you have missed the news stories on this event, La Palma is best described as a "volcanic ocean island". According to geologists, La Palma is currently, along with its sister island, Tenerife, the most volcanically active of the Canary Islands. Formed three to four million years ago by submarine (under-sea) volcanic eruptions, the island has a landscape of hardened lava and scoria (porous cinder-like fragments of dark lava.

So, why am I bringing this subject up? Because La Palma has long been the subject of scary scenarios that have predicted a future event where a volcanic eruption could cause the western flank of the 203 square mile island (roughly 1/6 the size of Rhode Island) to fall in to the ocean, generating a giant wave of nearly 3,000 feet, which would radiate out across the Atlantic Ocean and inundate the Eastern seaboard with waves potentially reaching 165 feet or more -- and it would only take 7 hours to reach its destination! So, again, why am I sharing this information? Because, since September 11th, there have been over 4,000 tremors on the tiny island, resulting in an earthquake swarm and multiple eruptions causing fissures in the rocky landscape and along the ridge of its highest volcanic mountain, fueling fears that the flank of the mountain could possibly break off and fulfill the prognostications of centuries-old prophecies.

And what does all this have to do with U.S. and Israeli relations [hinted at in the title of this post]? Well, in 2012, I wrote a blog post noting the natural and political disasters that had assailed America in the last 20 years. You can read that complete list on the post by clicking here. Those events began on October 30, 1991, with what became known as "The Perfect Storm". President George H.W. Bush initiated the Madrid Peace Conference to consider Israel giving up "land for peace".  As this Conference opened, a freakish "perfect storm" developed in the North Atlantic, creating the largest waves ever recorded in that region. The storm traveled 1000 miles from “east to west” instead of the normal “west to east” pattern and crashed into the New England Coast. Thirty-five foot waves crashed into the Kennebunkport home of President Bush.

Today, I'd like to cite just a few of the other American policies that required Israel to compromise its land, and which seemed to "coincidentally" occur at the same time as natural disasters... the 1994 Northridge, CA earthquake (U.S. urges Israel to give up Golan Heights); Hurricane George in 1998 (when Secretary of State Madeleine Albright finalizes details of agreement between Israel and Palestine to give up 13% of Judah and Samaria); and culminating with Hurricane Katrina in 2005, when Israel carried out the evacuation of 9,500 residents from Gush Katif and four Samaria communities. Residents were forced from their homes by Israeli troops, some dragged away kicking and screaming and placed on buses that took them from the area.  The Gaza withdrawal was backed by the U.S. government. Some Middle East analysts and senior Israeli politicians entirely attributed the evacuation plan to pressure coming from the American establishment. These natural events, plus political and economic disasters all coincided with concessions Israel made with its Middle Eastern enemies. I think you will be astounded when you read the post in its entirety.

So, now we're facing the possibility of another natural disaster that could potentially dwarf all the others... the entire Eastern seaboard, including the economic center of the U.S. (New York City) and our political capitol (Washington D.C.) could suffer monumental loss of life and territory. So, is there anything going on in our national foreign policy with Israel that could possibly foretell such a disaster? Well, during negotiations in the House this past week, the Democratic leadership was forced to cut $1 billion for Israel's Iron Dome missile defense system, leaving Israel vulnerable to thousands of Hamas-launched rockets. Israeli officials have been quoted as saying that most of the 4,350 rockets fired from Gaza during the conflict in May were blown out of the sky by Iron Dome interceptors.  It is obvious, that failure to fund the effectiveness of this self-defense system could be catastrophic for Israel. Some are saying this is a "temporary" halt and only a "technical postponement" of eventual reinstatement of the funding. [Within 24 hours the House overcame the lobbying of their liberal faction to approve and pass the funding]. Now we will see if the Senate follows through. And in the meantime, La Palma continues to erupt and the world watches to see if the earth-changing event will occur.

All this may seem like a crazy Christian conspiracy ... and maybe nothing happens. But I'm not one to dismiss what history has shown us. Remember that old axiom, Those who fail to learn from history are doomed to repeat it? Maybe, we'd be wise to consider that. And to add fuel to the conspiracy flames, there is the quatrain from Nostradamus (1503-1566), the French astrologer, physician, and reputed seer who wrote, The great mountain, seven stadia round... after peace, war, famine, flooding... It will spread far, drowning great countries... even antiquities and their mighty foundations. Willing to dismiss this as superstitious conjecture or a false prophecy? Perhaps what Revelation 18 has to say might give you pause.

Revelation, Chapter 18 is focused on the Fall of the great city Babylon. Now, Christians and commentators, alike, have long speculated about the identity of this great city, with Rome/Vatican City, Washington, D.C., and New York City being among the top candidates. Described as the city where "the the merchants of the earth have grown rich from the power of her luxurious living", and sitting as a queen among the kings of the earth, my vote [at this time in history] is leaning towards New York. To fan the flames of this possible scenario, Scripture says "her plagues will come in a single day; death and mourning and famine, for mighty is the Lord God who has judged her, and she will be burned up with fire. One cannot help but think of the thousands of needless deaths from the disastrous C-19 policies in  New York City.

Again, the Bible forewarns that the merchants of the earth will weep and mourn because no one buys their cargo (goods) anymore. Is it because our dollar is on the precipice of being abandoned as the world's reserve currency? Wall Street is in New York and its numbers lately could certainly be signaling that event. But why would that cause the "merchants of the earth" so much torment? Wall Street has such a significant impact on the global economy because it is the trading hub of the biggest financial markets in the world’s richest nation [according to the website Investopedia]. Making some connections now?

And again, the Bible says that in a single hour all her wealth will be laid waste. So perhaps there's another little clue that La Palma is tied to this Biblical prophecy ... Verse 21 says, Then a mighty angel took up a stone like a great millstone and threw it into the sea, saying, So will Babylon the great city be thrown down with violence, and will be found no more.

I'm not claiming to be a prophetic voice or a seer of any kind ... I just find it interesting that there are some compelling connections between our history with Israel via our political policies and events, the  predictions of a 16th Century astrologer/seer, and the prophetic warnings of the ultimate End Times book in the Bible. This is what we know for sure ... a faction of the U.S. governing body was successful in their attempts to temporarily stop the funding of Israel's primary defense mechanism at the same time an ancient volcano in the Atlantic Ocean has the potential to throw off a devastating tsunami that could wipe out our Eastern seaboard and destroy millions of lives. Sounds Biblical to me! Our political history has given us a template to go by, and it's sure hard to ignore.

So, I will end this post the same way I did in 2012 ... whether you see a connection between our government's policies, the treatment of Israel, and these forces of nature, you must surely see that the fortunes of America are slipping. Is it God's judgment? I am not qualified to answer for Him. And now, in 2021, I would add this caveat: I'm afraid that we resemble the great city of Babylon even more today than we did then. I invite you to read that sobering chapter in Revelation, and then join me and millions of other Christians as the Kingdom government on earth to change the idolatrous and evil forces that are destroying our country. And be sure and keep an eye on La Palma!

Revelation 18:4-5     Then I heard another voice from heaven saying, "Come out of her, my people, lest you take part in her sins, lest you share in her plagues; for her sins are heaped high as heaven, and God has remembered her iniquities".