Moving From Religion to Faith to Relationship 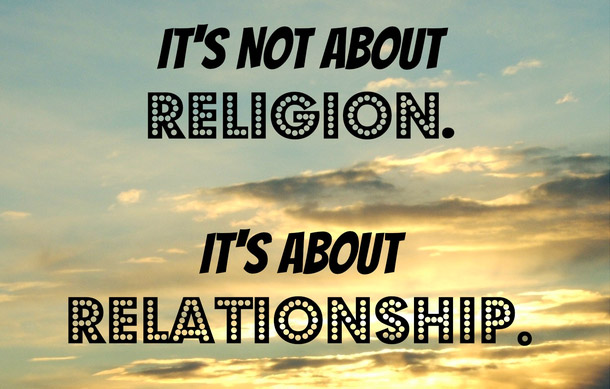 I am often amazed at the Christians I come in contact with who are still unable to extricate themselves from a religious mindset, which keeps them bound in doubt and unbelief. That might sound like a vague or ill-defined statement, so let me try to clarify my thoughts. What I'm trying to convey is the message that oftentimes Christians view what they call their "faith" from a system of religious principles, tenets,  dictates, or decrees; as if there is a specific "order" of how to believe in God. But that can lead to associating God as a strict task-master, with rules or practices intended to regulate behavior or thought. Stray from the application of those prescribed rules, and God will punish you for "not doing it right".

Believers become so consumed with not breaking the rules, that they begin to doubt their worthiness to receive salvation. They become so worried about coloring inside the lines of religion, that the focus becomes about them and not about the One they profess to worship. That is the picture we see portrayed by the Pharisees in the Bible. Just like those ancient religious leaders, Christians today may recite all the commandments, but not practice them; profess holiness, but continue to act unrighteously; spout mercy and grace, but sow injustice. And believe me, I am well aware that we have an Enemy who tempts us to sin. That is our human nature, and I am in no position to cast the first stone!

This same religious mindset can come perilously close to Gnosticism which plagued the Early Church and is still alive and well in the 21st Century. Gnosticism makes God out to be distant and uninterested in the day-to-day experiences of life, and thereby leads to human interpretation (put forth as knowledge) of God's will.  So I grieve for my Brothers and Sisters in Christ who only know Jesus through religion. They will equate it with "faith", saying they have faith, but there is a world of difference between religion and faith. Religion tends to be expressed in outward acts or deeds and self-made wisdom; resulting in the performance of rituals and traditions.  Religion is often experienced in the physical world. Faith, on the other hand, is defined as assurance of things hoped for [and divinely guaranteed], and the evidence of things [unlike religion] that are not seen.

Religion will say, "I've done everything right ... I've followed all the rules ...". Faith will say, "God is my strength, and I trust in Him." People with faith [versus religion] do not define their relationship with God by how many of the rules they follow. That only got the Pharisees accused of hypocrisy by Jesus. The acts of people of faith are done to please God, not men. Faithful people are obedient to His expressed will; knowing [and expecting], and eagerly looking forward to their promised inheritance. Religion is focused on the here and now. Faith knows we are strangers and exiles on the earth, sustained by the promise of a return to our heavenly home. Chapter 11 in Hebrews is known as the "Hall of Faith", and there is not one person listed in that chapter that is lauded for their religion; they are all men and women of faith. They are examples of how to move from religion to faith and Godly relationships with our Father in Heaven.

And that leads me to the importance of relationship with God. It is difficult to have an authentic relationship with God if we see Him as only a distant taskmaster with rules that must be followed to please Him. There is no room for intimacy in that relationship. And faith, alone, without intimacy in a relationship with God, will be empty of the familiarity and friendship that are hallmarks of a real partnership. For you see, that is what God is looking for... someone to partner with on the earth. And I wish I had discovered that truth earlier in life.

But the reality, in my life, is that I first came to know my God, and my Lord and Savior, through Religion. I found a Pastor that introduced me to all the doctrines of the Church and the precepts and principles of the Bible, but I was never taught that these principles were level one; that my Father wanted obedience and intimacy, and I would never find my way to those concepts by limiting myself to Sunday attendance, Church offices, or denominational affiliation. As strange as it may sound, I was never really encouraged to get to know Him through a personal study of His Word. There was always someone else responsible for telling me what I was to know ... a Sunday School teacher, the Pastor in his 20-minute sermon each week, or an "elder" whom I automatically assumed should know more than me.

It wasn't until I began to study and read the Bible on my own, and went to these people with my questions, that I realized a lot of them had no answers from a faith standpoint ... they were just repeating man-made doctrine, and were responding from religion, not faith. Some were even uneasy with questioning these formulaic answers, possibly thinking it was blasphemous to God to challenge what the leaders of religion had unquestionably accepted as "God's Truth". But I found that as I dared to trust in God [more than men] for my answers, that He responded with amazing revelations that left me in awe of His character and nature. I began to believe EVERYTHING about Him in the Bible -- especially the supernatural aspects, which the modern world declares He no longer displays.

And that has led me to real relationship with ALL of who He is ... Father, Son, and Holy Spirit; merciful, gracious, loving, and just. I know Him in all His individual capacities, and how He works for my good. I know how to hear from God, Jesus, and Holy Spirit -- individually and together. I have learned how to spend time in the spirit with them and receive rest, peace, power, and strategies. And I know that if the Body of Christ is unable [or unwilling] to move beyond Religion into Faith, and then grow their Faith into a real Relationship, then the season we are about to move into is going to be difficult for most to traverse. We must be focused on Christ as our way forward and through the crises that are coming upon us. We must be able to transcend the limitations of this earth and ascend in the spirit to sit in the presence of our Savior. Religion cannot become our sanctuary in this season. Faith and Relationship will be the weapons that the Enemy cannot destroy or defeat. He has no answer for them! There is nothing in his arsenal that is comparable to them! Thank you, Jesus, that you continue to pursue us; that you answer our questions and doubts with your convincing and infallible truth; and that you never leave us nor abandon us when we fail you! Strengthen us through your power in us, far beyond anything we dare to ask or think! Glory be to you in all the generations that come after us! Amen!

1 Corinthians 1:30-31     But it is from Him that you are in Christ Jesus, who became to us wisdom from God [revealing His plan of salvation], and righteousness [making us acceptable to God], and sanctification [making us holy and setting us apart for God], and redemption [providing our ransom from the penalty for sin],  so then, as it is written [in Scripture], “He who boasts and glories, let him boast and glory in the Lord.”