Be Hopeful! The Destiny Of Our Nation Is At Hand! 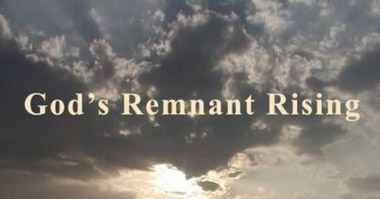 I'm sure there is no one who would disagree with my statement that, at this moment, the destiny of our nation is looking precarious and our future seems uncertain. We appear to be a nation divided; not only along political lines, but in regards to social issues, racial matters, and economic principles. Our nation is bracing for predicted unrest in the coming days -- no matter who wins this Presidential election. As evidence of these disparities, voter turnout is forecast to be the highest we've seen in over a century. For those of us who look to God during this national crisis, what does all this portend?

Well, I would tell you that I don't have all the answers. Like many of you, I can recognize that our nation has strayed from its dependence on God, and the Enemy has sown an abundance of weeds into what was meant to be a good harvest for the Lord. Once centered on sound Biblical principles, the heart of our nation has slowly been corrupted and tempted to follow man's selfish desires. The will of God has been overlooked as this nation followed the ancient path of Molech worship, ritually sacrificing children in the act of abortion. We've seen God's institution of marriage, His design for genders, and even His plan for eternal life erode in favor of a social-scientific model for living one's life. By all appearances, our shifting cultural standards have led to the deterioration of Biblical morals and laws. But does that mean that God is done with us? Has He turned His back on the United States of America? Will we, like so many fallen nations in world history, be forgotten by future generations?

Here's how I suggest we look at our situation .... just like all those ancient nations, there are two segments of the citizenry: the general population and what God always sees as "His remnant". These are the true, moral, and pure followers of Him and His Son, Jesus Christ. So, if you are a righteous follower of Jesus, then you are part of the remnant of the United States of America. And God has instilled the destiny of our nation into our hearts. His purpose and plan for this nation will be carried by us, as believers and the remnant -- not the unbelievers, no matter how much they outnumber us.

Let me give you a visual. I want to take you a little deeper into the reference I made above about the sowing of wheat and weeds. The unbelieving population is like weeds that Satan has sown into the world. The Bible calls them "tares". From the outside, they look just like a kernel of wheat, [and therefore just like the remnant], but on the inside, their center is black and poisonous to man, producing sleepiness, nausea, convulsions and even death. Without God, the unbelieving general population has degenerated into willing subjects of leaders who are false teachers and prophets leading them astray. But as the remnant, God looks at the condition of the center of the seed He planted, and sees the fruit of our nation's destiny.

And I think He does that for all the nations! Just take a look at China. If you are looking through spiritual eyes it's not hard to see that the world characterizes China as the repressive and controlling Communist regime. But God sees the remnant of the underground church in China, and their courage and faith. They are the ones who carry the purpose and destiny of their nation as far as God is concerned. The same thing can be said of us! As the remnant, we carry the destiny of this great nation, and as the Ekklesia, we will see the purpose and will of God done in this nation! As of this moment, we don't yet know what that will look like --- will we be afforded four more years to make amends for our national sins and rise up as the true Ekklesia, governing this nation in spiritual righteousness? Or will we be subjected to persecution and unrighteous control and restraint -- in both our faith and freedoms?

I remind you again -- regardless of the outcome of this election, God will see us as the remnant! Whether in the midst of triumph or defeat, we can count ourselves blessed to be part of the remnant. And let us not forget the example of Elijah, who cried out to the Lord after receiving the death threat from Jezebel. He bemoaned the fact that God's people had abandoned Him; had torn down His altars and killed His prophets -- and now they were trying to kill him! He begged God to just let him die; he'd had enough! We may well be facing such a dry and unproductive season, but we must remember that God did not abandon Elijah in his darkest hour! God had a plan and a purpose for Elijah in the future and destiny of his nation. And He will for us, too!

Just like ancient Israel, the history of our nation is found in both a positive divine destiny and a negative demonic destiny. We are in the midst of that struggle for our nation, and we must engage in spiritual warfare to see God's purpose for America fulfilled. Let us act as the Ekklessia and intercede on behalf of the remnant of the United States of America!

I want to give you a quote from Asher Intrater, an apostalic leader of a congregation of Messianic Jews in Israel. He knows well the purpose and destiny of his nation, and what he speaks over the remnant in Israel is applicable to us. I want you to take his proclamation to heart; this is meant for you!  "You are the representative within your nation that carries the destiny that God desires for your nation. You contain within you a vision for the salvation [and deliverance] of your nation. Your future is to be among those from all the nations who will gather each year to worship King Yeshua in Jerusalem. This is The Destiny of the Nations that is carried within the remnant of every tribe and tongue and people and nation ... including Israel and including your nation."

So, let us sit back and watch the results of our national election with hope and spiritual clarity. Yes, we all have our desires and expectations about this election. All of us want to experience a future full of comfort, security, and prosperity. But if that is not to be our reality, we must never lose sight of the truth that we are the remnant of this nation and our destiny lies in our tireless and tenacious representation of God's will and purpose on the earth. We are the fruit of righteousness in this nation, and it doesn't matter what the "outer shell" looks like. We each have a destiny and we have been born into this nation to see its destiny align with God's purpose. We have the authority and the authenticity of the Word of God to lift us up. Do not give in to despair or fear. Rejoice and abound in hope; may our God of hope fill you with all joy and peace as a member of the believing remnant. Amen!

By now, we all know that our election has been compromised and we must join together to pray in the spirit for God's justice to prevail. Do not give in to a spirit of fear or deception or dejection. As the Ekklesia, our prayers need to move beyond asking God to "fix this election", and ask Him to show us how to out-strategize the Enemy in the spirit. Just like Joshua waited for instructions from God about how to defeat the Canaanites, let us all pray and listen for a strategic plan to defeat the demonic tactics coming against this election. It is clear -- We are in a spiritual battle for our nation. Let us put on our spiritual armor and stand as the Children of Light against the forces of darkness and evil. God is for us, so who can be against us?

Psalm 22:28      For the kingship and the kingdom are the Lord’s and He rules over the nations.