Are We On The Verge Of Destroying Our Nation's Pride? 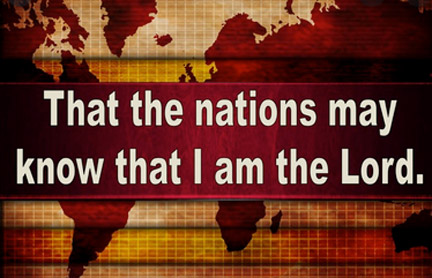 Radio host and political commentator Michael Savage is quoted in his book, Trickle Down Tyranny, "Economies can be rebuilt, armies can be repopulated, but once a nation's pride is gone it can almost never be restored." In 2012, an article on the United Church of God's website quoted a Conservative Party member of the British Parliament, who wrote, "The Arab Spring, the threat of Iran as an emerging nuclear power, the continuing violence in Syria and the American reluctance to get involved there, have all signaled the weakness, if not the end, of America’s role as a world policeman." That statement was followed by a warning that this was just one aspect of America's waning national power, and the writer felt it served as a prophecy that was beginning to be fulfilled; a prophecy that "may be on the verge of accelerating with frightening speed if the nation doesn’t take drastic steps to repent and change its self-destructive course."

What do you think? Do events seem to be accelerating to you? In the Bible, God spoke to the rebellious nation of Israel and said, "I will break your pride in your power." It was a warning for rejecting His statutes and commandments, and breaking His covenant with them.  It would be the penalty if they turned away from Him to follow after leaders who led them to worship pagan idols; and leaders who abandoned God to increase their own wealth and power; or leaders who neglected God's moral laws to serve their own lusts and flesh. And I look at the condition of our nation today, and it is so clear that there is a massive split along ideological, political, spiritual, and social/cultural lines. I'm not sure there has ever been a more clear delineation between good and evil.

What I am seeing in my country today is no different than what the prophet Isaiah saw during Israel's prosperous reign.  He could just as easily have been speaking to us when he warned, "O My people! Those who guide you lead you astray and confuse the direction of your paths" (Isaiah 3:12). And isn't his admonishment of  “Woe to those who call evil good, and good evil” (Isaiah 5:20) just as appropriate for today?  The corruption, misconduct, and fraud in our election process is not only embarrassing and shameful [and may be criminal], it dishonors the efforts of our Founding Fathers to give us a Constitution that would protect the rights and freedoms of its citizens. The original intent of that distinguished group of patriots was to write a code of laws designed to allow the citizenry to live, work, worship and advance their lives while participating in the governmental process, protected by rights and freedoms that are natural, God-given and safeguarded by law. Oh, how far this generation of leaders have fallen in this election!

Leaders make a difference in the continued survival of their nations, and the Bible records that even the nations favored by God lived or died by the influence and actions of their leaders. The histories of Israel and Judah prove that. And now we witness our elected leaders calling for lists to be made of those who have differing political views. The free discourse of ideas are censored, and the First Amendment is in serious danger of being nullified. I want you to consider how much of this significant safeguard of our freedoms has been threatened in the last year: Congress shall make no law respecting an establishment of religion, or prohibiting the free exercise thereof; or abridging the freedom of speech, or of the press; or the right of the people peaceably to assemble, and to petition the Government for a redress of grievances.

As I look upon the utter chaos that seems to be at the heart of governing leaders today, I want to thunder like Jeremiah, and shout at our misguided and hateful Congress. These are the leaders who have resented anyone who doesn't fall in line with the Anti-Christ agenda to subdue the world for the kingdom of darkness. These are the leaders "who try to make My people forget My name… and cause My people to err by their lies and by their recklessness".  Yes, I know that this nation has made mistakes and our dream of building a country where all men live as equals has fallen short of that lofty goal. But what I'm seeing now is more like a nightmare!

I believe it is incumbent upon us to revisit the heart of why this country was founded in the first place ... "Governments are instituted among Men, deriving their just powers from the consent of the governed, --That whenever any Form of Government becomes destructive of these ends, it is the Right of the People to alter or to abolish it, and to institute new Government, laying its foundation on such principles and organizing its powers in such form, as to them shall seem most likely to effect their Safety and Happiness. Prudence, indeed, will dictate that Governments long established should not be changed for light and transient causes; and accordingly all experience hath shewn, that mankind are more disposed to suffer, while evils are sufferable, than to right themselves by abolishing the forms to which they are accustomed. But when a long train of abuses and usurpations, pursuing invariably the same Object evinces a design to reduce them under absolute Despotism, it is their right, it is their duty, to throw off such Government, and to provide new Guards for their future security." That is an except from the Declaration of Independence and describes why the colonists felt driven to separate themselves from the government of Great Britain.

The problem we are encountering today is that we are divided into two camps who each think that the form of our government has become destructive to their existence; that they have the right to alter or abolish the government which threatens their safety and security. Each side believes there has been a long train of abuses, that they are being subjected to absolute Despotism, and it is their right to throw off this kind of oppression. This historical document also declares that long-established governments should not be changed [or discarded] frivolously. But we have come to the point where these two distinctly different factions are no longer willing to suffer silently or willingly.

What we are seeing playing out before our eyes is the result of a prideful nation whose leaders strayed from the original covenant with God and sought to bless themselves and this nation through their own power. They abandoned virtuous and moral principles and joined with the citizenry to create laws that fed their own desires and lust for self-fulfillment. And now we see a rapidly accelerating deterioration to violence in the streets and a full-blown rush to a communistic form of government. UNLESS... the million people who descended on Washington D.C. in support of traditional values and a return to our Christian principles in government, in our families, in our society, and in every aspect of this nation's culture storm Heaven with our repentance, our confession of allowing wickedness to cover the land,  and our declarations for a return to the Lord's statutes and laws.

Then I believe that God will remember His covenant with America, entered into with the Pilgrims, and He will not reject or destroy this nation. Then I believe we will once again find favor with God and He will restore our nation's pride. We will once again be inhabited by a righteous people who refuse to bow down before false gods or sinful leaders. But we must not grow tired in our efforts, nor become slow to respond to the Enemy's increased attacks. We must persevere, no matter how long it takes and how bitter the fight becomes. Then we must "clean up our act" and destroy the altars of abortion, sex trafficking, and wealth and greed. We must invite the Most High God to once again establish His statutes, ordinances, and laws in this great nation, and declare that He is our God and we are His people. Father, please forgive us of our sins and hear our prayers for Godly and righteous leaders!

Proverbs 14:34    Righteousness [moral and spiritual integrity and virtuous character] exalts a nation, But sin is a disgrace to any people.