God, Judges and The Court 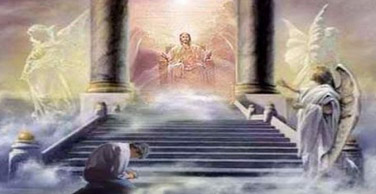 This past week, we in America have been treated to what is supposed to be a respectful meeting of the Senate Judiciary Committee, conducting oversight and consideration of nominations to the Supreme Court. I'm not going to comment on the obvious political bias exhibited among the Senate members. That is not my purpose for today's blog post. What I want to discuss is the role of Judges, our Courts, and how they correlate with the Book of Judges and God's Court(s) in Heaven.

It goes without saying that God is the Righteous Judge of all the Earth (Genesis 18:25). And as Believers in Jesus Christ, we have the right and privilege to enter into the courts in Heaven through prayer and spiritual warfare. And before I continue, I want to make the comment that our legal system on earth is modeled after the court system in Heaven. Just as we are entitled to have legal representation in our earthly courts, Jesus is our Advocate and Legal Representative in the Courts of Heaven.

And just as we have different levels and classifications of courts, there are different courts in Heaven, as well. We declare that the Cross of Christ is our justification before God, but there are times that we need to gain access to the justice system of Heaven in order to receive righteous judgment. We are able to operate in that system because of our intimate relationship with Jesus. Let's consider for a moment the different types of courts to which we have access. To begin, there is the Court of Mediation (or Reconciliation). This is in character with "settling out of court" in our earthly justice system. Just like here on earth, this should always be our preference and the first step we take. When we encounter a dispute with anyone, our legal position should be to reconcile.... But all things are from God, Who through Jesus Christ reconciled us to Himself [received us into favor, brought us into harmony with Himself] and gave to us the ministry of reconciliation [that by word and deed we might aim to bring others into harmony with Him] -- 2 Corinthians 5:18.

Then there is the Court of Petition.  Bringing our prayers before the Father, and presenting our petitions to Him, is in reality entering the Court of Petition... do not be anxious about anything, but in everything by prayer and supplication with thanksgiving let your requests be made known to God -- Philippians 4:6. And notice, we should appear in this heavenly court with thankfulness, no matter the circumstances.

Next, we have access to God's Throne of Grace.  God holds Court while sitting on His Throne, which is where we approach Him with our prayers, and in intimacy with Him. And we must approach Him with grace and mercy -- for others, as well as ourselves. God's justice finds its origins in His love; and so should ours... Let us then approach God’s throne of grace with confidence, so that we may receive mercy and find grace to help us in our time of need -- Hebrews 4:16.

At the center of God's court system is The Court of Mount Zion.  Throughout the Bible, we read of Mount Zion as God's place of justice and judgment. His Throne of Grace and the Court of Petitions are based here, and the heart of Heaven's court system is found here ... But you have come to Mount Zion, to the city of the living God, the heavenly Jerusalem. You have come to thousands upon thousands of angels in joyful assembly, to the church of the firstborn, whose names are written in heaven. You have come to God, the Judge of all, to the spirits of the righteous made perfect, to Jesus the mediator of a new covenant, and to the sprinkled blood that speaks a better word than the blood of Abel -- Hebrews 12:22-24.

The Court of the Accuser is where Satan appears to lay his case before God for his legal authority to attack us. We should not engage with this court, but rather take our case to the Court of Reconciliation or Court of Petition, where Jesus serves as our Advocate and defense lawyer, if you will. There He can testify that we have come in a spirit of forgiveness and reconciliation ... For the accuser of our brothers and sisters, who accuses them before our God day and night, has been hurled down -- Revelation 12:10.

Finally, we have The Court of The Ancient Of Days (Heaven's Supreme Court). This is the highest court in Heaven, and we cannot enter except by admission through dreams and visions. Just like our Supreme Court, it is the last court a case may be heard; there are lower courts where all legal matters should be attempted to be settled first... As I looked, “thrones were set in place, and the Ancient of Days took his seat. … The court was seated, and the books were opened -- Daniel 7:9-10.

NOTE: These are the courts that are readily acknowledged in the Bible, but I have been shown, in my spirit, that there are lesser courts that we have access to in times of specific need. But we must always ask for permission before opening a case or entering that specific court. Our first stop in heaven's court system should always be to achieve reconciliation. I have actually heard the Father reprimand mankind; He said, "Stop clogging up My Courts with needless petitions. So many of your problems can be resolved with forgiveness and applying the grace and love I have given each of you."

So, now I want to approach the Book of Judges in the Bible in light of the purpose of our Supreme Court and what we witnessed this last week. We can surmise from the Book of Judges that the Lord, who is Creator God, is the Judge and King of all the world; no one else holds that title. [NOTE: I approach this truth from the understanding that Jesus and the Father are One (John 10:30)]. And the plan from Genesis to Revelation is to restore man to his original purpose -- to rule the world as God's righteous representative on earth. We also recognize that God rules through His human leaders; but He is the ultimate Judge and King, and those who serve Him do so at His discretion and are supposed to rule as He would rule -- [on earth as it is in Heaven].

If man assumed his original purpose for being created, righteousness would reign upon the earth. But as we have seen throughout history, and most certainly today, that is not reality. Christ embodies perfect human ruling and through His crucifixion and resurrection, He sits upon His Throne in Heaven and rules and judges in perfect righteousness. And one day, He will climb down from that Throne and return to render His judgment against all the Evil in this world that has come against His creation. Until then, the idea was that our courts here on earth would be administered by sons and daughters who would share in His righteous rule and judge accordingly. That was the plan in the Book of Judges and nothing has changed [from God's perspective] in the centuries since.

Sadly, we have not experienced that in our nation. True, there have been judges who sat on the highest court in our land who took their assignment seriously. But in the decades of my life, I have seen the nomination of Supreme Court Justices made in the spirit of partisan politics and immoral agendas. This nation under God is in great need of godly leadership, in both our civic institutions and in our courts. Because we seem to have lost our way [and our purpose], Roe v. Wade is the law of our land. Same sex marriage is the law of our land. Our courts are clogged with grievances involving racial discrimination, gender discrimination, and once-guaranteed constitutional tights. Where is the desire for righteousness and  reconciliation? Why do we not see the power of our intimate prayers and petitions before God?

The Book of Judges is a history of the rebelliousness of Israel, who demanded a human king, rather than submitting their allegiance to the King of the World. Despite the sinful decisions of Israel throughout their history, the Bible promises redemption through King Jesus who will one day be our righteous Judge. We must pray that in and through [and in spite of] the sinful judges who have seemingly destroyed God's redemptive plan, that God can and will heal our land from the rebellious and destructive decisions that our legal "leadership" have imposed upon us.

My prayer is that Judge Amy Coney Barrett will prove to be a catalyst for that redemption. But we have been fooled in the past. I ask that you join me in prayer and petition before the righteous and rightful Courts of Heaven to deliver us once again into a nation that represents King Jesus's original design for human rule. Lord Jesus, return our nation to a land You can be proud of; one that will uphold the rule and laws of Heaven! And let it start today! Amen!

1 John 2:1    My little children, I write you these things so that you may not violate God’s law and sin. But if anyone should sin, we have an Advocate (One Who will intercede for us) with the Father—[it is] Jesus Christ [the all] righteous [upright, just, Who conforms to the Father’s will in every purpose, thought, and action].