Will CERN Open The Portal to "The Bottomless Pit"?

It has been five-and-a-half years since I wrote a blog post about the Large Hadron Collider (or "Super Collider") in Geneva, Switzerland. The Collider is the creation of CERN, established as the foremost world-class fundamental physics research organization in Europe. CERN [whose acronym comes from the French translation for European Organization for Nuclear Research], maintains that it is conducting research for purely scientific reasons; developing accelerators in order to "collide" fundamental particles of matter at extremely high energies, supposedly for the purpose of discovering the "God Particle" and how the universe works. These experiments produce antimatter, purportedly trying to prove how an invisible, universe-wide field gave mass to all matter right after the Big Bang. A simple definition of antimatter is this: "molecules formed by atoms consisting of antiprotons, antineutrons, and positrons. Stable antimatter does not appear to exist in our universe (Oxford Dictionary)." That alone, should tell you that the scientists and physicists at CERN are creating something that is not of this world, and certainly not from God. The next experiment to blast a beam into deep outer space is set for October 22nd, this week.

Why should this concern us? Well, for starters, since the first particle collisions were achieved in 2010, the scientists have upgraded the energy "beams" they have produced, going from 3.5 teraelectronvolts (TeV) per beam [which was four times the previous world record] to 6.5 TeV in 2013. There have been reported malfunctions with the super collider, most notably in 2015, and now repairs have been made to the machine and they are reportedly going to take it to new power levels never achieved before. Just think about that ... Scientists contend they are simply smashing particles together to unlock the secrets of the universe. But a growing number of people around the world have posited theories that the real aim of CERN is to blast open a portal to admit demons from Second Heaven!

That should be enough to get your attention! And it doesn't help to calm fears when one considers  famed scientists such as the late Stephen Hawking sounded the alarm bells; it seems somehow prophetic when he warned that the "God Particle" could destroy the universe.  Other well-respected scientists warn that CERN's Super Collider is so powerful it could produce particles of dark antimatter, the mysterious stuff whose gravity holds the galaxies together.  They warn that there is a possibility of a cataclysmic event in which CERN creates a black hole that swallows the earth ... their words, not mine. And if you want to see a vivid depiction of what this might look like, watch the 2009 movie, Angels and Demons, based on the Dan Brown novel of the same name. 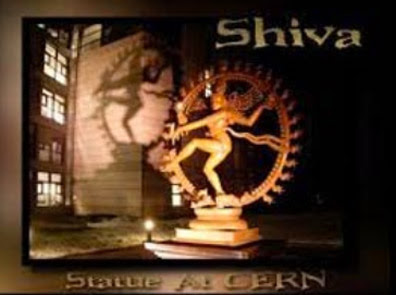 So, while scientists express concern that these generated black holes could cause the decay of the universe, Christians wonder why CERN is so committed to investigating extra dimensions and parallel universes? Could it have anything to do with the presence of a statue of the Hindu goddess Shiva (shown coming through a portal) at the entrance to the facility? Shiva is known as the "goddess of destruction". Or could it be because CERN is located in a place that was once called “Appolliacum” during Roman occupation, and which was believed to be a portal to the underworld? Also,  the Greek translation is “Apollyon” and it, too, means “destruction”.

In 2015, before the machine failed, CERN researchers boasted that they were confident they could make contact with parallel universes by producing "mini black holes". And since that failure, the level of energy they will be blasting out into our universe is exponentially more than has ever been attempted in the past; all with the hopes of opening 12 black holes/portals into other dimensions! Considering that scientists refer to black holes as "bottomless pits" of gravity, my spirit is shouting, "Revelation 9:1-3"! This prophetic passage reads like this: And the fifth angel blew his trumpet, and I saw a star fallen from heaven to earth, and he was given the key to the shaft of the bottomless pit. He opened the shaft of the bottomless pit, and from the shaft rose smoke like the smoke of a great furnace, and the sun and the air were darkened with the smoke from the shaft. Then from the smoke came locusts on the earth, and they were given power like the power of scorpions of the earth. In that prophetic Word, did you notice that the star (angel) "fell from heaven to earth"? Can you now see why it might be beneficial to not open up portals [or black holes] from that dimension to ours?

It is not too difficult to discern that we live in spiritually dark times. I will tell you that, through our Inner Healing Ministry, Mark and I are finding that people are more forthcoming about the demonic attacks they are suffering. And we have heard testimonies from the Millennial generation of the dark entities they are encountering through astral travel, witchcraft and other occult practices. So, isn't it logical that we should be suspect of scientists that are all too eager to mess with the universe and attempt to open a portal to the unknown? As I wrote in 2015 ... Is this what Nimrod was trying to do?  If you are a student of the Bible then you know that there are levels of "heaven", and the "dark forces of the spiritual world" live in the Second Heaven.  Remember Ephesians 6:12, in which the apostle Paul tells us, "For we do not wrestle against flesh and blood, but against the rulers, against the authorities, against the cosmic powers over this present darkness, against the spiritual forces of evil in the heavenly places"?  Could these be the "exotic matter" the scientists are in search of, and that we have the potential to come in contact with through these created black holes or portals?

Could man once again be the catalyst for another incursion of evil fallen angels that are mentioned in the Bible and ancient historical writings? The prophet Daniel mentions that there are beings called "Watchers", or holy ones, who report to God and make decrees on behalf of God.  But Watchers were also mentioned in pseudepigraphal books, such as Enoch and Jubilees, which were popular and influential in the First Century, and ranked alongside the Torah, Psalms and Isaiah in importance to Jews.  These apocryphal books were also alluded to by Peter and Jude in the New Testament, giving them at least historical credibility.  In these instances, "Watchers" were among a superior class of angels, some of whom fell from heaven, led astray by Satan.  In the 7th and 18th chapters of the Book of Enoch, some of the Watchers who fall are imprisoned in the Second Heaven, and others are cast to earth where they take human women (Enoch 7:3, 18:4) who bear giant offspring (the Nephilim mentioned in Genesis 6). Why in the world would we want to open a portal to give those imprisoned in the Second Heaven a way to gain access to the earth? 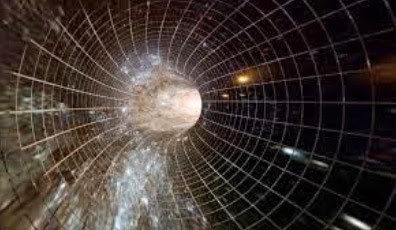 And the Bible makes it clear that Nimrod's goal in casting arrows towards Heaven was to gain access to that dimensional realm and overthrow God. Was he trying to open a portal with those arrows? The scientists at CERN may not be using arrows to create a portal to the next heaven, as Nimrod did, but wouldn't their powerful beams of atomic matter serve the same purpose? And is it possible that these CERN scientists have already opened portals with their previous attempts and are simply hoping to expand the gateways for demonic entrance into this First Heaven? It isn't hard for me to consider that possibility as I witness the increasing violence and evil that is present on the earth. It certainly has increased in the years since CERN began their experiments.

And if this isn't enough to take you to your knees in fervent prayer, The Times of Israel is reporting that "China is also joining the quest and building its own particle smasher five times more powerful than CERN’s Hadron Collider.  And as Europe and China both race in search of the "God Particle", it may not be long before the world finds out who is at the end of that quest—the Creator, or the destroyer of the universe." That is sobering, indeed!

In the end, I will admit that the science part of this story is over my head. I don't understand how the Collider works, and neither do I comprehend the mechanics of it. And all this might sound like an overrated conspiracy theory by a crazy Christian, but what is apparent to me is the obvious incorrect estimation of the Supremacy of God. What is apparent to me is the arrogance and pride of men in the 21st Century, who not unlike Satan, his Watchers, Nimrod, and countless of evil men who have followed in their footsteps, they think that they can overthrow Almighty God, the Creator of the Universe. They are trying to out-God the Most High God. It will only lead to their judgment, devastation, and God's justifiable wrath. Unfortunately, the Bible prophecies that portals will be opened and Evil will be unleashed upon the earth -- until God has had enough and sends Jesus to destroy Evil once and for all.

How I pray that October 22nd doesn't set these prophecies in motion. I'm pretty sure that these scientists, who proclaim they are searching for the God particle, are doing so to prove that God doesn't exist and that man can control the universe.  It is mankind's selfish compulsion to rip open the veil separating this world from other worlds or dimensions, and you get the ridiculous statement by CERN's former Director General and Director of Research, Rolf Heuer:  "…When we open the door, something might come through it into our reality! Or, we might send something through it into their reality!" The question is, "What is the something that might come through from their side... and who is the they of their reality"? Pray that God will shut this down once again!

Proverbs 8:1-5    Does not wisdom call? Does not understanding raise her voice? On the heights beside the way, at the crossroads she takes her stand; beside the gates in front of the town, at the entrance of the portals she cries aloud: “To you, O men, I call, and my cry is to the children of man. O simple ones, learn prudence; O fools, learn sense.