From 9/11 To Now: What My Spirit Has Learned 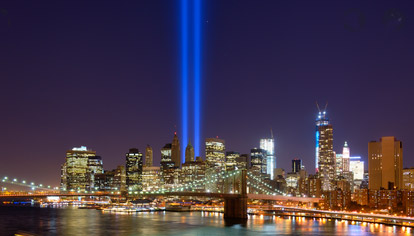 Yesterday, as I contemplated the anniversary of September 11, 2001 I realized that this year it feels different. It is still heart-breaking to hear those nearly 3000 names being read, and to remember what it felt like that day -- as if my innocence was lost and that I had awakened in a whole new version of my world. For perhaps the first time, I questioned my perception of my country, and if I'm being honest, I examined my understanding of my God.

It's been nineteen years since that fateful day, and I will tell you, that Jesus has done a lot of work in my spiritual life. You should know that I was about to enter into my own personal seven years "in the wilderness", as I call it. I had just resigned from my job [ending 25 years in the conventional workforce] to join my husband in his art business, becoming a 100% self-employed family. On top of that, we were in the process of renovating a 75-year-old farmhouse on 129 acres of leased land, exchanging a metropolitan city for the isolation of a country lifestyle. And on the morning we were in Lowe's buying kitchen cabinets, the planes hit the towers.

And two weeks later we were scheduled to exhibit Mark's artwork at a major gallery in Santa Fe. The nation was reeling and in mourning; I was struggling with a major lifestyle change; our government was trying to remain stable; and who was going to be interested in buying art? All of that and more was like a tidal wave of worry threatening to engulf me. But, instinctively, I knew that this was where the rubber met the road in terms of my faith. I had been a self-declared Christian for about 14 years, but now it was time to go beyond a profession of faith and actually demonstrate it. So, the Lord began opening my eyes and my heart to His presence. My faith became about seeking Him and building a real relationship. I began talking to Him and being honest about what I didn't know and about my fears.

And the biggest thing I had to learn was to trust Him. You see, the iniquity in my family line centers on the worry about money. I call those seven years on that leased land "my wilderness" because it was a time of deep and intense battle with the Enemy as I overcame the spirits of Doubt and Fear and learned to trust the Lord for my provision. It was during those seven years that Jesus revealed the origin of the fear of lack and poverty -- that it was an attack upon my family line and I needed to overcome it and defeat it. I had grown up seeing that same fear in my father and it was an inherited trait in my own life, and I hated it. All the factors had come together in my life to make it a stronghold and the devil was taking full advantage of the situation -- 9/11; being newly self-employed; the economy was slow to come back; and Mark was still in the process of building his reputation and business. Throw those fiery darts of Doubt and Fear into the mix and I was a mess.

But that's when the Lord brought a love of studying the Bible to Mark and I. In the midst of our lean financial times, we turned to relying on Jesus to strengthen us. I learned that our money was not ours, but a gift and blessing from God, and that He had plans for us and wanted to prosper us. We just needed to trust Him. In fact, I can remember starting to receive thoughts that I knew were not mine, and they were ideas of how to grow our business. And I remember hearing the Lord say to my spirit, "If you will be faithful and trust Me, I will be faithful to you". We formed a covenant that day, and those words are still something that I hear and believe in today. So, praise Jesus, I was able to break the bondage of that generational iniquity, and recognize the fiery darts when they come, and declare all the times that my Lord has been faithful to deliver us the provision we need when we need it.

But learning that valuable principle of faith in Jesus is not all that the Lord has taught me. At the end of that seven year lease, He delivered us to our current property and home and set us upon a higher calling of ministry in Inner Healing, and Teaching others about the Kingdom of God and sharing that important Gospel. In addition to these new assignments, He has let me see behind the curtain and discern the spiritual war that is going on in the dimensions.

Nineteen years ago, I was not cognizant of Freemasonry and its roots in my country; of the New World Order; or Satan's agenda to use corrupted men's power to advance his kingdom of darkness. When I said earlier that 9/11 represents the loss of my innocence, it is true. But I see clearly now. Nineteen years ago, I believed in the righteousness of sending our military to avenge the deaths of our citizens. Today, I am aware that in the physical, a secret cabal of the world's elite plotted those horrific events in order to advance their agenda of endless wars and their own takeover of the world. And, today, I see what happened in the spiritual -- those evil men joined with Satan in performing a gigantic sacrifice of 2,977 lives.

It has taken nineteen years of slow moral deterioration and depravity to seep into the spiritual framework of my beloved country. I still believe in the essential goodness and purpose of our founding, but I have taken off my rose-colored glasses and discern the weeds that the Enemy sowed into our fertile ground. I still believe that our nation can produce a good harvest for the Kingdom of God, and I am trusting that the Lord is going to send out His angels to uproot the evil sowed by Satan -- that those who align themselves with the devil's human agents in order to cause violence, to disrupt society, to avow Marxist/Anti-Christ ideals, and to further the plans and schemes of the wicked global elites, will find themselves gathered for divine judgment.

The last nineteen years have led us from that seminal event on September 1, 2001 to what we are experiencing today. It has been one long campaign by the Prince of Darkness. So, what has my spirit ultimately learned? I have learned that I am seated in Heaven with Christ and that I have power and authority to act in His Name to defeat those forces who practice the evil of their diabolical god. My spirit has informed my soul of my true identity. I am no longer swayed by the schemes of the Enemy and I know that I do not war against flesh and blood. I know that, ultimately, this battle is the Lord's and He has already won. But I also know that there is a final battle to come; one in which the sons of the evil one will be judged and punished, and we who occupy until He comes will shine forth, reflecting His radiating Glory.

I do not enjoy contemplating the slow decline of my nation. And I do not like to consider many aspects of what we've become. But my spirit knows the heart of my Father in Heaven, and I know He discerns the hearts of His faithful remnant. We will not be identified with those who seek power and riches for themselves, or who foment racial division and violence. We join our spirits and our voices to declare that we are the children of the Most High God and we are the Light in the midst of this current darkness. We will not surrender this nation to the Fallen One and his cohorts. We dedicate our lives and our flesh, soul, and spirits to revival and restoration of the glory of God in our land. We ask You, Father, to honor those who are trying to represent You in righteousness. We ask for Your divine protection and strategies, and we ask for continued strength and courage. We know what's coming and we are ready. Bless us, Father, and fight for us, Jesus and Holy Spirit! And we ask for all of this in Your Holy and Mighty Name! Amen!

Psalm 144:1-2       Blessed be the Lord, my Rock and my great strength, Who trains my hands for war and my fingers for battle; My [steadfast] lovingkindness and my fortress, My high tower and my rescuer, My shield and He in whom I take refuge, Who subdues my people under me.