I am writing this post for all those who believe that spiritual warfare is real. For me, that is kind of a logical statement; after all, who wouldn't believe that spiritual warfare is real or necessary? You would be surprised! And whenever I have had conflict with fellow Christians over this topic, the usual response I get is that they don't see it in the Bible. "Give me Chapter and Verse" is the customary reaction. So, I thought I would write a short post, presenting Scriptural evidence of actual weapons of spiritual warfare referred to in the Bible.
The purpose of this post is to not only provide knowledge for Christians, but to prepare them. If we say that Scripture is our guidepost for God's Truth, then we know that there will be a war between our returning Lord and those who operate in the Anti-Christ spirit promoted by Satan. The Body of Christ needs to receive this truth and come to the understanding that we are to battle for the Lord. That's why Paul tells us to put on our spiritual armor in Ephesians 6! Furthermore, the Lord has used His creation in the past as weapons against His [and our] enemies. And as children of the Most High God, we can call on those weapons to aid in our battles in the spiritual realm.
These weapons exist throughout the Bible; from the Old Testament through to the Book of Revelation. For those who will say, "We don't need these OT weapons, we have Jesus". True! But if you do a deep study in the Old Testament, you will find that it is Jesus who appears as the Lord in the Old Testament, and who is using or conveying these weapons, and He is the same today as He was then. So, let's take a look at what is available to us, as prescribed by God in His Word... 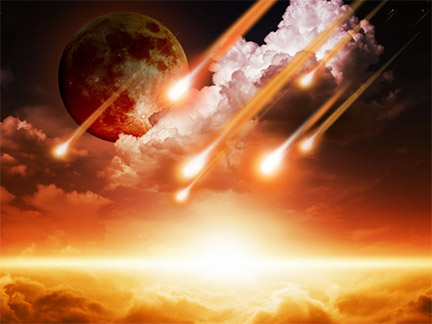 1. Stars - When the nation of Israel was under the leadership of the prophetess and judge, Deborah, and found themselves at war with the Canaanite king, Sisera, (Judges 4-5), Deborah called her military commander, Barak, to join her in battle against the king. Judges 5:20 records, From heaven the stars fought, from their courses they fought against Sisera. Can you imagine if we cooperate with God in our battles against our spiritual enemies [using the power of the constellations], just how devastating it could be against those who oppose us?
2. Spear of the Lord - There are several references to the Lord using a spear, in either His own hand, or empowering a spear in the hand of His chosen representative, to defeat the Enemy. As David is pursued by Saul and his enemies, he writes in Psalm 35, Draw the spear and javelin against my pursuers! Joshua also had access to the Lord's spear in Joshua 8:18, Then the Lord said to Joshua, “Stretch out the spear that is in your hand toward Ai, for I will give it into your hand.” A sample of how we could employ both the stars and the spear of the Lord in our prayers against our spiritual enemies might sound like this: "Oh Heavens, bombard every evil gathering assigned against me with the spear of the Lord!"
3. The Hiss of the Lord - This is a fascinating picture of the Lord! In Isaiah 7:18-19, the prophet prophesies about the future Day of the Lord, and tells King Ahaz, In that day the Lord will whistle for the fly that is at the end of the streams of Egypt, and for the bee that is in the land of Assyria.  And they will all come and settle in the steep ravines, and in the clefts of the rocks, and on all the thornbushes, and on all the pastures. We must not concentrate on the historical or geographical information in these verses - they were spoken to mean something to King Ahaz in his time period. But we should focus on the weapons that the Lord will use "in that [future] Day" ... the hiss of millions of flies and bees coming to attack the Enemy! But today, when we are being tormented by the whispers and lies of our enemies, we can pray, "Be silenced by the Hiss of the Lord, in the Name of Jesus!"
4. The Fire of God - Hebrews 10:26-27 speaks of God's consuming fire against His enemies: For if we go on sinning deliberately after receiving the knowledge of the truth, there no longer remains a sacrifice for sins, but a fearful expectation of judgment, and a fury of fire that will consume the adversaries. The prophet Zephaniah forecasts a future day of fire: Therefore wait for me,” declares the Lord, “for the day when I rise up to seize the prey. For my decision is to gather nations, to assemble kingdoms, to pour out upon them my indignation, all my burning anger; for in the fire of my jealousy all the earth shall be consumed. Until that day, we can pray, "Lord, send your consuming fire against my enemies; against the spirits that torment me and steal my peace".
5. Engines of War - An engine is anything that is the agent or instrument of a particular process or purpose. "Engines of War" could also be understood as "Instruments of War". Ezekiel 26:9 portrays how the Lord used the instruments of warfare in ancient history to destroy the enemies of Israel: He will direct the shock of His battering rams against your walls, and with His axes He will break down your towers. So, how could we construct a prayer for the 21st Century? How about this? "Lord, direct the shock and awe of your heavenly armies against the evil intentions of those who seek to kill me and destroy our nation! Bomb their installations and confuse their technologies. Establish us in Your Protection and the Knowledge of the Lord!"

Are you getting the idea? Warfare was constant and real in the Bible, and nothing has changed. We are in a battle for the dominion of the Earth and the battles are both in the physical and the spiritual. But we need have no fear! Jehovah Nissi goes before us into battle. And we can call upon His weapons of warfare in the battles we face. I invite you to search out the following weapons of the Lord that are mentioned in the Bible: the Hook of God; His horrible Tempest; Locusts; the Lightning of God; Hailstones; the Finger of God; Heat; the Stone of Offense; Hail and Fire mingled with the Blood of Jesus; Earthquakes and Sea Quakes; Thunderbolts and Whirlwinds; the Hammer of God and His Rod of Iron; Boils and Blindness ... and much, much more.
I present this because there is a dangerous delusion in the Body of Christ; the belief system that tells Christians we don't need to worry about going to battle because we are not subject to the wrath of God and will not suffer -- that we will be whisked away in the Rapture without encountering any of the bad stuff that is coming at the End of the World. Yes! We are not subject to God's wrath if we are washed in the Blood of Jesus and He sits enthroned upon our hearts. BUT we have an Enemy [and his hordes] who seek to kill, steal and destroy our lives. We are behind Enemy lines, and must continue Jesus's fight to "destroy the works of the devil" (1 John 3:8). the Bible gives us examples of the weapons at our disposal. Become familiar with them and do not hesitate to use them! They are real and they are mighty in the hand of the Lord!

Check out the book "101 Weapons of Spiritual Warfare" by Dr. D. K. Olukoya. Also, you will find many examples of weapons of spiritual warfare in Dan Duval's book, "Prayers That Shake Heaven and Earth". Both are available on Amazon.

2 Corinthians 10:4     "The weapons we fight with are not the weapons of the world. On the contrary, they have divine power to demolish strongholds."