I have been warning about the sinister undertones of Disney for several years now, and it appears that they are upping the game. LifeSiteNews reports that "The Disney Channel premiered a new cartoon – The Owl House – on Friday, January 10, that promises to introduce young viewers to a world of demons and witchcraft." 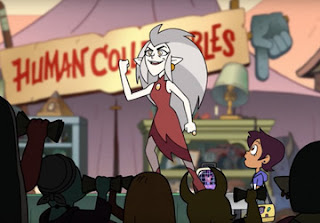 According to Disney themselves, the series follows self-assured teenage girl Luz, who discovers a portal to another realm where humans are not well-liked, and she must disguise herself in order to fit in at witch school. Luz partners with a rebellious witch named Eda and her diminutive sidekick, King, who was indeed once a king, and is searching for a way to restore his titles and glory. Despite not possessing any magical abilities of her own, Luz pursues her dream of becoming a witch by serving as Eda's apprentice and learning the ways of magic.
Furthermore, Disney describes that realm as a “Demon town,” where Luz takes up residence with Eda the Owl Lady, “the most powerful witch on the Boiling Iles.” Luz declares, “Someday, I’m going to be just like her.”
Deborah Bunting, a writer for the Christian Broadcasting Network (CBN), wrote a commentary on this new Disney show, in which she said, “Over the years, Disney has gone farther and farther into the darkness of the spiritual world that opposes the living God, coming up with programming and characters that lead the vulnerable into that dark world of deception.”  And the show's art director said the original concept for the show was "girl hangs out with witch in hell", and the show's creator [Dana Terrace] wanted to make the The Owl House, not only a very real demon realm, but make it "feel like home".
To that end, Disney has created The Boiling Isles as the main setting of the animated series The Owl House. It is a land populated by all sorts of magical creatures with a town located in the remains of a dead titan. The Demon town is pretty much alive, full of random hands and eyes in strange places. Being the creative geniuses that they are, Disney has created a very distinctive and menacing town with fiendish places of interest. There is Bonesborough, a lively town in the Boiling Isles filled with creatures, witches, ghosts and monsters. There is Hexside Academy of Magic and Demonics, the prestigious high school for witches, demons and magic folk. They have created the Witch Arena, a  gathering place located on the most mysterious part of the Boiling Isles: the Knee. Set within the ruins of a castle, groups will meet here for rituals and social functions. You will find the Covention Center, an arena for magical entertainment and competition. It is the site of the annual COVENTION, in which the covens of the Isles vie for new recruits. And believe it or not, they even have a Playground, where in the midst of the hustle and bustle of Bonesborough, it is a popular destination for kindergarteners, their parents and King.
To show where their heart lies, the Disney fandom website lists as an "interesting" trivia fact, that the design of the woods was originally going to be much more dominated by black colors, but since it was "melting" with Luz's hair too much, the creators went with "bloody red" for the trees. 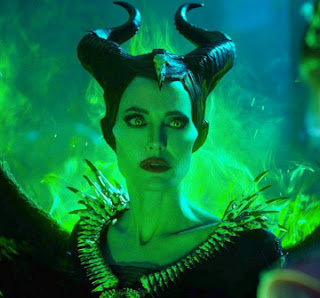 At this point, nothing surprises me from Disney anymore. They are getting bolder and less guarded about their intentions. In 2014, I wrote a warning about being aware of the recreation of ancient pagan symbols and gods and goddesses in our current culture. I pointed out the movie Maleficent, which starred Angelina Jolie as a modern reincarnation of Isis (note the horns), and was a re-do of the old Disney movie, Sleeping Beauty. [NOTE: Disney released Maleficent 2: Mistress of Evil this year, in which Jolie is described as "going full evil in the sequel".]
When I saw Sleeping Beauty at the age of 5, I was terrified by the evil sorceress, Maleficent.  In the rebirth of this classic tale, the demonic Maleficent, who was once pure evil, was morphed into a sympathetic Earth goddess; cursing, yet protecting her surrogate daughter, the sleeping beauty Aurora. But it appears, her "motherly instincts" are short-sighted in the sequel, and Disney seems to have taken extra steps to embrace the Darkness in order to align themselves against those who claim to represent the “Light”.
But I don't know why we should be surprised. In 2015, I wrote that even as far back as the release of Fantasia in 1940, Disney openly glorified Chernabog, a giant evil demon, who appears as the only main character in the "Night on Bald Mountain/Ave Maria" segment.  He has been praised as Disney's best representation of pure evil, and as animator Vladimir Tytla's greatest triumph. As a very "raw" representation of evil, he, in his original appearance, is not placed in the context of any real story, and he and his minions' actions are not committed in pursuit of any discernible goal other than general havoc–wreaking and tyranny on all... in other words, "to steal, kill, and destroy" (John 10:10). 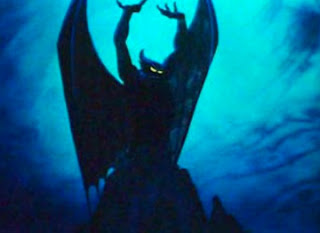 Chernabog is one of the most powerful villains Walt Disney has ever created because he is depicted as a ruthless monster, feared by all who encounter him.  Walt Disney, himself, said another name for Chernabog was Satan.  Many of his appearances also show him to be somewhat comedic, as seen in The Wonderful World of Disney, and House of Mouse.  But I promise you, he is anything but funny.  His power is shown to be incredibly demonic, being able to unleash hellish realms and spirits. While immensely dark, he has managed to become a trademark Disney villain. [NOTE: I personally know several people who have encountered a demon very similar to this character].
In fact, Thornton Hee, another Disney animator who worked on Fantasia, recalled wanting to ask Vladimir Tytla (the creator of the character Chernabog) about something, but when he entered the animator's room, he found it was in complete darkness save for the fluorescent light under Tytla's drawing, which lit his face in an eerie way as he worked. This unnerved Hee enough to compel him to leave without alerting Tytla to his presence at all.
And Thornton Hee was not the only one frightened by this depiction of Chernabog.  At the time of its release in 1940, many parents criticized the film for frightening their children in the "Night on Bald Mountain" segment.  One film critic,  Dorothy Thompson of The New York Herald Tribune, wrote that she "left the theater in a condition bordering on nervous breakdown," because the film was a "remarkable nightmare."  And no wonder... when you read of Chernabog's descriptions on a website dedicated to his creation as an animated character, you read things like "Gigantic, slender, muscular, scary-looking face, black skin and horns, yellow glowing eyes, jagged fangs, giant black wings with purple undersides".  You read that his "occupation" is Demon Lord.  The things he likes are "Evil, darkness, war, chaos, night, fire, shadows, sins, hate, fear, despair, death".  And he dislikes "all that is good, and the light". 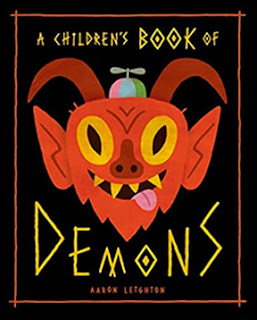 So, add all of Disney's evil machinations to LifeSiteNews reporting that Walmart, Amazon, and Barnes & Noble offered a book inviting young children to learn how to summon demons, and I hope it heightens your awareness of all that is coming against our children. Written for 5 to 10-year-olds, A Children’s Book of Demons directs kids to “conjure gentle demons by writing their sigils, which serve as ‘a phone number’ straight to the spirit. Amazon's description of the book is as follows: Don’t want to take out the trash tonight? Maybe you’re swimming in homework? Perhaps that big bully is being a real drag? Well grab your colored pencils and sigil drawing skills and dial up some demons! This paranormal parody is filled to the brim with funny spirits more silly than scary! But in one review, a parent wrote, "It teaches kids the original Greek, Hebrew and Egyptian names of these malicious demons". In short, it is promoting witchcraft, the occult, and Satanism.
We must become vigilant and alert to the tactics and schemes of the Enemy to influence our children. They are already immersed in technology, and their iPads have become their baby-sitters. Please be aware! The spiritual health and safety of this vulnerable generation is at stake. These movies and books are not innocent entertainment! They are designed to seduce your children and draw them into the occult. And remember the definition of the occult: any person, group, or organization that tries to gain supernatural power, abilities, or knowledge apart from the Creator God. Protect your children from these demonic forces!

Isaiah 8:19    And when they say to you, “Inquire of the mediums and the necromancers who chirp and mutter,” should not a people inquire of their God? Should they inquire of the dead on behalf of the living?

Email ThisBlogThis!Share to TwitterShare to FacebookShare to Pinterest
Labels: Demonic Influences, Disney and demons, The Occult and Witchcraft