Signs and Symbols We Ignore At Our Own Peril

For those of you who are accustomed to wearing a tin foil hat, well, you might want to screw it on extra tight today.  In the shadows of my mind, I have been trying to figure out what the Powers of Darkness are trying to show us in recent world and cultural events.  I am not one to believe in happenstance or coincidence; my Biblical worldview supersedes "accidents in the universe."
So when God tells me in Amos 3:7 that He "will do nothing without revealing His secret to His servants the prophets", I am confident in that promise.  After all, He has always warned the world of coming judgments.  He warned Noah before the Flood; He warned Abraham and Lot before the destruction of Sodom and Gomorrah; He warned Joseph of the 7-year famine, Moses of the 10 plagues in Egypt, and His chosen people of their coming captivities.  And ultimately, Jesus warns us of what the Last Days will be like.
I also happen to believe, as taught by Bible scholars, that God, in His righteous character, demands the same standard from Satan.  If He has given the Devil power over this earth until His Son comes to wage the final judgment, then the Devil must follow the same rules -- he can do nothing without revealing His secrets to the world.  And that brings me to my theme for the day.
Through his servants, the Powerful Elite, Satan and his occult have an allegiance to their symbols of power that they use to show they are in control of this earth.  They use them to hint at their plans, and unfortunately, we have become quite seduced by these occult signs and symbols.  In fact, I am going to show you perhaps the most unlikely pairing of symbols that point towards a delusion that Satan will use to lull us into submission.  My thoughts have been confirmed by a very detailed and informative article in Before It's News.  I would urge you to read it to get the full impact of this post.
The first is not so hidden, if you are familiar with ancient mythology.  It involves the very current situation in Iraq.  I must admit that I did not see the deception at first.  In recent days, we have all been focused on the advance of the Islamic jihadist group ISIS (Islamic State of Iraq and Syria).  I, in fact, wrote that this was their official name, although I also saw references to them being called ISIL (Islamic State of Iraq and the Levant, which in Arabic is al-Sham, meaning eastern Syria).  So why would the western world begin calling them by the name ISIS? 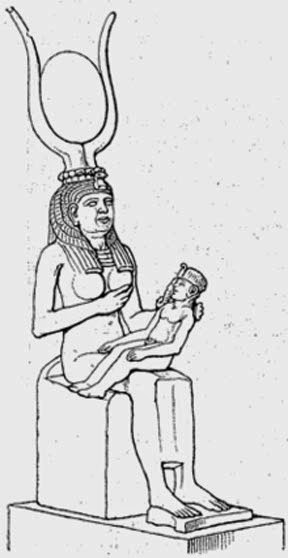 The most probable reason is that ISIS is well known in Greco-Roman mythology, and something easily recognized by Western minds.  (Read this for a more in-depth understanding of the impact of this figure). She was worshipped as the ideal mother and wife as well as the patroness of nature and magic (make that sorcery).  Isis is also known as protector of the dead and goddess of children.  In the typical form of her myth, she married her brother, Osiris, and she conceived Horus with him.  Isis became known as the Mother Goddess, and Osiris was known as the Dark Father.  In Biblical terms, she is known as "the whore of Babylon".
Isis was instrumental in the resurrection of Osiris when he was murdered by his brother, Set.  Using her magical skills, she restored his body to life after having gathered the body parts that had been strewn about the earth by Set.  There were 14 body parts strewn over the earth, but Isis could only find 13.  Of course, you can guess which part she did not find.  That missing body part became a symbol of power evidenced in the phallic-shaped obelisks found throughout the ancient and modern world.  This symbol of power was known as the "dged", pronounced as "jed".
(A little side note:  There soon became a secret sect of the Dark Father known as dgedi, or "jedi".  Is it a coincidence that in the movie Star Wars, the symbol of the Dark Father and his death became Darth Vader?  Darth = Darkness and Death; Vader is Father in Dutch and German.  Is it also by chance that Darth Vader was a fallen Jedi Knight?)
So exactly how does this ancient Isis connect to the jihadist group ISIS?  Can you conceive that in their conquests, they are attempting to pick up the pieces and restore back to life the modern Islamic Caliphate?  But the coincidences don't stop there.  At the death of Mohammed in 632 AD, a man by the name of Abu Bakr was installed as the first ‘khalifat rasul Allah’ (successor of the Prophet of God), or caliph of the Muslim religion.  According to the article in Before It's News, Abu Bakr suppressed tribal uprisings and brought central Arabia under Muslim control, after which he directed Arab armies into Iraq and Syria initiating the Muslim crusades.  Is it surprising to you that the current leader of ISIS's name is Abu Bakr al-Baghdadi?  So, 1432 years later we have a man by the same name leading Iraqis and Syrians in a new Muslim conquest.  The intent of this modern ISIS is to reclaim the capital of Iraq that sits so near to the ancient city of Babylon.  Could this be Satan using the power of names and symbols to proclaim his intent that Babylon the Whore should rise again?
But remember, I promised you a dual picture of Isis in the world and our culture.  This symbolic representation may appear to be benign, but do not let your guard down.  Throughout the centuries the mythology of ISIS has captured the imagination of the world.  She appeared in nearly all civilizations and was known by her other notorious names ... Athena, Venus, Diana.  But, we in the Western culture, have done our share to feed and fortify her myth. 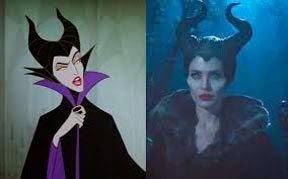 Take for instance, the current movie, Maleficent, starring Angelina Jolie.  This is a modern reincarnation of Isis (note the horns), and is a re-do of the old Disney movie, Sleeping Beauty.  When I saw it at the age of 5, I was terrified by the evil sorceress, Maleficent.  But in this modern adaptation, the demonic Maleficent, who was once pure evil, has now morphed into a sympathetic Earth goddess (played by Jolie); cursing, yet protecting, her surrogate daughter, the sleeping beauty Aurora.
A review, in The Olympian, puts forth a compelling argument that by endowing the horned Maleficent with motherly love, Disney seems to have embraced darkness in order to align themselves against those who claim to represent the “Light”.  And the choice of Angelina Jolie to play the sympathetic villain makes it easier for those who are inclined to be deceived to fall prey to the duplicity.  This picture of Isis, as the character Maleficent, begs our concern and compassion.
But we must not be fooled!  The consistency and harmony between the ancient myth of Isis, and the current embodiments of her nature, are simply the method by which Satan must show us his sinister plans.  God demands it, and he must comply.  The question is this: will we see these symbols and signs, and note the coincidences for what they are  -- warnings of Satan's power and his demonic plans?  Or will we sink further into our illusions and fantasies?  The saga of Isis has survived as long as Satan has had power upon the earth.  And she lives on today, in both reality and our imagination.  It seems as if Satan is upping the ante, doesn't it?

2 Peter 1:16      "For we did not follow cleverly devised myths when we made known to you the power and coming of our Lord Jesus Christ, but we were eyewitnesses of His majesty."