I Beg To Differ

On Wednesday, the First Lady altered our national history.  Is she just mis-informed, or was this a deliberate political move?  I'll let you draw your own conclusions.  But while speaking to 50 newly naturalized American citizens in Washington, D.C., she told them this:  “It’s amazing that just a few feet from here where I’m standing are the signatures of the 56 Founders who put their names on a Declaration that changed the course of history,” she said, referring to the Declaration of Independence. “And like the 50 of you, none of them were born American – they became American.”
Umm, I respectfully disagree.  Let's have a little history lesson, shall we?  The "Founders" to which she is referring are known more politely as our Founding Fathers.  They embodied a wide range of service to our country.  The Founding Fathers of the United States of America were political leaders and statesmen who participated in the American Revolution by signing the United States Declaration of Independence, taking part in the American Revolutionary War, and establishing the United States Constitution.
Furthermore, the phrase "Founding Fathers," applied to "an American statesman of the Revolutionary period, especially a member of the American Constitutional Convention of 1787", and has been in use since at least 1894.  A more generalized use of "founding fathers" has been in place since at least 1886.  But none less than our government's archives list the birthplaces of the 56 signers of the Declaration of Independence, and only 7 were not native Americans.
I can hear the naysayers proclaiming that the United States of America did not come into existence until July 4, 1776, when the thirteen British colonies declared their independence from Great Britain. Therefore, our Founding Fathers considered themselves British citizens, not Americans.  I strongly disagree.
While they might have been subjects of the British empire, due to the colonization practices of Great Britain, their nationality was specifically, and genuinely, American.  Just as the citizens of the British colony West Indies, saw themselves as West Indians; and citizens of the colony of Australia, saw themselves as Australian; the citizens of the North American colonies saw themselves as Americans.  Indeed, the term "America" had been applied to this land for at least a couple of centuries before the Declaration of Independence. 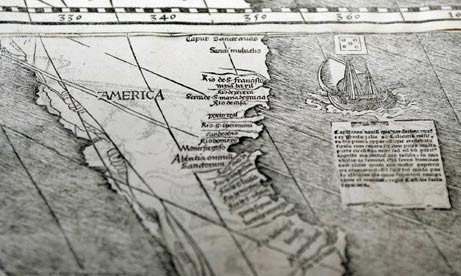 Note this map, which is the first one to use the name "America", and which is displayed in the U.S. Library of Congress.  It was created by German cartographer Martin Waldseemüller in 1507, and is the first document to show a separate Western Hemisphere and label the Pacific Ocean as its own body of water.  Before he drew the document, Waldseemüller had pored over notes from explorers Christopher Columbus and Amerigo Vespucci, as well as other unknown Portuguese and Spanish sources.  It is true that the German cartographer did not always use the name "America" in subsequent maps.  But the evidence is there that as far as geography was concerned, America existed before it was a British colony.
But at the heart of my disagreement with the First Lady is the question of whether or not the Founding Fathers were naturally Americans.  Just read their words yourselves:

•  "The time is now near at hand which must probably determine whether Americans are to be freemen or slaves" -- George Washington
•  "The cement of this union is the heart-blood of every American."  -- Thomas Jefferson
•  "Then join hand in hand, brave Americans all! By uniting we stand, by dividing we fall."  -- John Dickinson, Delegate to the Continental Congress

They obviously identified themselves as Americans! And overwhelmingly, they were born in America, which would make them Americans by virtue of their birthplace.  But I honestly believe that being an American is more than being born in this particular country.  That has been proven by our long, and proud, history of immigrants coming to our shores, seeking to be Americans.  "American" is a concept, a state of mind, it's a condition of the heart.  On that we can agree.
But I draw the line when she tries to portray the Founding Fathers as “Americans-by-choice”, just like the newly declared citizens.  “Immigration is at the heart of how we developed as a nation,” she said.  There's just one tiny fact she has misrepresented, the Founding Fathers did not immigrate from a foreign nation.  Many times they were the second and third generation of families born into the land.  And she is ignoring the fact that the 50 new Americans she stood before had become legal citizens, making them true Americans-by-choice.
I will not argue that immigration has been a hallmark of this country and our American heritage has benefitted from the infusion of those who seek to embrace our spirit.  But to distort the history of our Founding Fathers cannot stand unchallenged.  I will leave it to a 20th Century American to explain what was at the heart of those American Founding Fathers and everyone who proudly claims the title:
"When an American says that he loves his country, he means not only that he loves the New England hills, the prairies glistening in the sun, the wide and rising plains, the great mountains, and the sea.  He means that he loves an inner air, an inner light in which freedom lives and in which a man can draw the breath of self-respect ... America is much more than a geographical fact.  It is a political and moral fact - the first community in which men set out in principle to institutionalize freedom, responsible government, and human equality."  -- Adlai Stevenson

Proverbs 22:1-2   "A good name is to be chosen rather than great riches, and favor is better than silver or gold. The rich and the poor meet together; the Lord is the maker of them all."