Feeling The Heat: A Personal Experience

I have not spent too much time lately writing posts on getting physically prepared.  Part of the reason is that there are many sites who do that better than I do and can provide you with professional instruction.  Another reason is I figure if you are reading this blog, then you are already there mentally, and don't need to have your philosophy confirmed.
But I wanted to relate to you a situation that has been experienced by my family of late.  PLW's parents are in their early 70's.   They have come a long way when it comes to understanding what is going on in the world and their physical state of preparedness.  They have overcome their initial skepticism and most of their normalcy biases.  They have grown leaps and bounds in their spiritual growth and they clearly see the time on the prophetical clock.  Yet the realities of their age and physical limitations must be taken into account.
From the beginning of our own enlightenment to our changing world, we have discussed with our family the implications of various scenarios and occurrences.  Like all of us, my in-laws had to overcome the debilitating fears that came with considering the repercussions of civil unrest, horrific weather events, and terrorist activities, including an EMP.  We have done what we could to limit the discomforts that will be inherent with any of these circumstances. 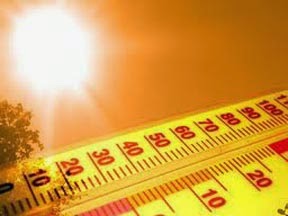 But last Friday they got to face what it would be like in the heat of South Texas should we ever experience a grid-down event.  The compressor on their air-conditioning unit went out as we faced a weekend of upper-90 temperatures in hot, humid, South Texas.  Now, you may think this is no big deal; after all their unit was under warranty.  Just contact your carrier and get a new one installed, right?  But that doesn't happen so quickly in small town Texas; especially on a Friday afternoon before the weekend.  It turns out that it would be at least 4 days until a new compressor could be shipped from a major city.  They were facing days of unrelenting heat and humidity.
Having them stay with us was the obvious solution, but our guest bedroom is at the top of steep stairs, and neither is able to handle stairs well.  We could accommodate them with air mattresses on the floor, but both have physical limitations that prevent them getting up and down that easily.  We suggested that they get a hotel room until the installation was completed, but they insisted on "toughing it out".  I think they wanted to prove to themselves (and us) that they were prepared to undergo similar conditions in the event of a national emergency.  And I was proud of their "can-do" spirit and their resiliency ... for the first day or so.  They took it as a personal challenge and it was good for them to know that they were stronger than they thought.
But when you are not in great shape or the best of health, and you are in your 70s, there comes a time when it's OK to throw in the towel.  We convinced them to treat themselves to a cool hotel room for Father's Day, and perhaps to consider a second night until the compressor could be delivered.  They acquiesced to one cool night, but returned to the stifling heat in their home the next day.  During the latest phone check-in, PLW could tell that the heat was taking its toll on them, both physically and  emotionally.  Their attempt to stick it out, while admirable, could result in adverse health issues for one or both of them, making the situation far worse than it is.  He finally convinced them that a portable air conditioning unit that would cool off 450 SF was enough to isolate and cool their master bedroom, giving them some respite, and us some peace of mind.  He helped them make the purchase and is installing it as I write.
I am relating this incident to you as a cautionary reminder --- it is one thing to plan in your head what you will do, and have to endure, should an emergency occur.  It is quite another to actually live it.   Yes, my in-laws still have electricity, so this portable A/C unit is a viable option for this particular scenario.  But should we experience a grid-down event, a generator would be able to run this portable unit and provide them some much needed relief.
Most importantly, it showed us that the elderly will pay a heavy price when the conveniences of our modern world come to a halt.  Energy-zapping heat, spine-chilling cold temps, and other harmful weather conditions will affect them more than the average population.  And that is just weather-related problems.  Throw a society in chaos into the mix, and they will be at even more of a disadvantage.   So let this innocent little disruption to normal life give you pause.  If you have elderly family, friends or neighbors, please keep in mind that they will need your help and encouragement when times get tough.  You can not game every situation, but this should show you that the possibility of even the simplest inconvenience deserves some planning in advance.

Exodus 20:12    "Honor your father and your mother, that your days may be long in the land that the Lord your God is giving you."