Yesterday was a heavy day for me.  Monday's usually are.  It is the day I return to the mundane tasks of my life in this world system.  I am just coming off a spiritual high of spending the Saturday Sabbath in rest and rejuvenation.  I allow myself that day, plus Sunday, to let go of headlines and emails and endless texts; of household chores and business duties, so that PLW and I can spend quiet time in our Bible studies and going wherever the Spirit takes us in our endless quest to learn more in the Word.  And it often involves a much-coveted afternoon nap or escaping into a historical novel.  But it all adds up to an appreciated respite from the weight of world events.
Then Monday arrived.  Yesterday meant it was bill-paying time, which always brings me back to the reality of living in the world.  And then I tried wrapping my head around the Biblical world view that was presented to me.  It seems that there is not a place on earth that is not on the brink of catastrophe.  Whether it is the slaughter of Christians throughout Iraq and Kenya, or the ongoing hostilities between Russia and Ukraine, the wholesale sell-off of America's land to Chinese interests, the increase in solar flares, meteor activity, volcanos heating up, the strength of our currency cooling down --- it all adds up to a tension in the universe. 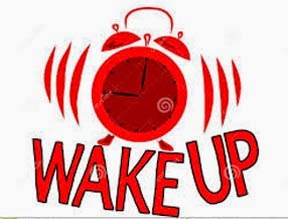 Yet how many Americans got up yesterday morning, and it was business as usual?  How many were totally oblivious to the alarming news reports, or the condition of their country, let alone the world?  I'm afraid that too many are buried in their phones or iPads; checking in on their Facebook page as they stand in line to feed their double pump caffeine fix.  Wouldn't it be nice to just live in a digital/caffeine fueled haze, unconscious and unconcerned about all the circumstances that could have a lasting effect on your life or your family?  That may sound like a gross exaggeration and an over-simplification, but I know far too many people who fit that description, and are setting themselves up for both a huge shock and a grand deception.
For those of us who have been fortunate enough to receive the prompting of the Holy Spirit, we must cope with the reality of what we see, as well as endeavor to reach our sleeping associates.  And while I oftentimes get frustrated with the reluctance of others to clear their minds and become observant, I am also encouraged by the growing numbers of those who are awakening from their slumber.  In fact, I was listening to a podcast yesterday from an enlightened Christian author, and he was taking phone calls from the public.
Call after call was a testimony by fellow Christians who had, sometime during the period of 2009-2010, developed a deep hunger to know more about the Jewish roots of their faith, while coming to the conclusion that their Church was not meeting their needs.  (PLW and I now realize that we are a member of this family of faith). These were spontaneous calls that began feeding on each other, and every caller was eager to share his/her experience.  Where once they had felt they were alone in this unconventional desire, they were finding out that others had been receiving the same yearning and determination to grow their faith outside the norms of the American church experience.
For all of us, that new and unorthodox thirst for more Biblical knowledge gave us an awareness to see national and worldly events from a Biblical perspective, and an even greater calling to share this outlook with others.  I am speaking for everyone who fits this description, and I think I can safely say that, at first, we were considered radical, and perhaps even border-line heretical by mainstream Christians.  Non-believers just thought we were some kind of Christian conspiracy nuts.  But the Holy Spirit would not let go of us!  As we persevered in presenting our Biblical evidence -- (hopefully) with respect for those who were not at the same place we were -- we began to see individuals receive their own anointing, as if the scales were instantly removed from their eyes.  Instead of feeling like we were in a wilderness of our own making, we began to see a growing family of revived disciples.
Until hearing that podcast yesterday, I had no idea that our experience has been repeated in such vast numbers throughout the country.  Could this be a Third Great Awakening?  Could this be the answer of the prayers of the faithful in this Land?  I confess that I am reluctant to label anything so personal by a name associated with traditional Church and national history.  The First Great Awakening in America was the result of powerful preaching that gave listeners a sense of deep personal revelation of their need of salvation by Jesus Christ.  The Second Great Awakening reached out to the unchurched, and resulted in the enrollment of millions of new members in existing evangelical denominations and led to the formation of new denominations.
This Awakening, if indeed it be so, is not the result of powerful preaching from our churches' pulpits for the redemption of men's souls.  And while the evangelical movement is good at resulting in mega-churches with millions of new members, it remains focused on itself while the members' eyes are cast inward instead of up towards their Deliverer.  No, if this is a true Awakening, it will be different from the others.  The modern Church will not play a central role; indeed, it is falling away from its mission.  It is aiding and abetting a spiritual blindness that will not serve Christians well.  This Awakening is a direct hit on the hearts of Believers by the Holy Spirit Himself!  We are seeing the layers of the mysteries of the Bible being peeled back; we understand the Word like never before, and we are growing in numbers!
If you do not know the saving power of Jesus Christ, then you may think this post is not for you.  But I am here to tell you that there is no better time to get to know Him.  World events are falling in line with ancient Biblical prophecies and I don't want anyone to be caught unaware and unprotected.  The same Holy Spirit that speaks into my heart, will answer your call... anywhere, anytime.  I just urge you to please not go back to sleep!  This life is just a blip on the radar screen--don't lay eternity on the line for the empty promises this world offers.

Romans 13:11    "Besides this you know the time, that the hour has come for you to wake from sleep. For salvation is nearer to us now than when we first believed."