To Hell With Them!

This post will be highly controversial, but hard to ignore.  My only purpose is to expose the evil-doers, not to paint a broad brush of denunciation over any religious entity.  God will be the Judge.  That being said, I know that there is good in the world, and that "the light goes on shining in the dark; it is not overcome by the dark."  But there are times that it seems the darkness is so unnatural and wicked that it is difficult to see how the Light can penetrate the Evil.
Such is the case in the growing evidence coming out of the Irish convent child murders.  Why even take a look at this vileness?  The darkness must be exposed to the Light; if it is kept in the shadows, it continues to thrive and grow. 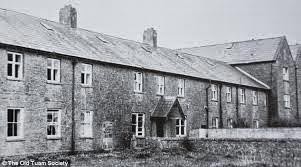 News reports have been telling us for days now that the bones of nearly 800 children were found in a Roman Catholic Nun septic tank.  At first, it was my understanding that this was a result of the stigma of illegitimacy, and that the dead babies were thought to have been secretly buried beside a home for single mothers and their children in County Galway, Ireland, over a period of 36 years.  That fact alone is enough to declare the perpetrators worthy of God's wrath.
But Before It's News website is now reporting that the facts of this situation are far more demonic. The Irish Garda police force has revealed that marks on the bones of the children reveal that they were "ritually" murdered.  Forensic experts have confirmed the decapitation and dismemberment of babies in the mass grave resembled the usual signs of ritualistic killings.  Who in this world could do that to a baby?  The answer is, "They are not of this world."  Five judges of the International Common Law Court of Justice (ICLCJ) in Brussels viewed forensic evidence that appeared to link the children’s deaths to the global elite Ninth Circle Satanic Child Sacrifice Cult network.
Apparently this group is well known to international courts.  Since March the ICLCJ International Court has been prosecuting members of the Ninth Circle Satanic Child Sacrifice Cult network for child trafficking, pedophilia and murder that are possibly linked to 34 child mass grave sites discovered in Ireland, Canada and Spain.  The child mass grave sites were on properties mainly owned by the Roman Catholic Church, Anglican Church, United Church of Canada and Irish and Canadian governments. The Canadian 32 child mass grave sites have been refused excavation by the Catholic Church, Canadian government and Crown of England even though children’s remains have been uncovered and examined since 2008 by licensed archeologists including one from the Smithsonian Institute.  These are not low-level child predators ... and these are very serious accusations!
In the last month over 20 witnesses from nine different countries have named members of the Ninth Circle Satanic Child Sacrifice Cult network as their perpetrators. Global elites under indictment included European royalty and prominent church and government officials in England, Italy, Belgium, Holland, Ireland, Canada and the US.  I am not only horrified, but in utter shock!  If I had not read it myself, I would not believe it.  And if you have the heart to click on the link I have provided above, you will find the names, titles, and heinous deeds of these evil individuals.  But I warn you, you will be shocked at what has been alleged. 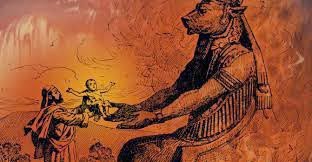 I am not writing about this to indict the Catholic Church, but to expose the alleged evil that has been inflicted upon innocent children.  It is nothing new.  Throughout history child sacrifice has been a popular method of Satan to enslave people to his ungodly system.  The Bible records that ancient Israel fell prey to the lure of child sacrifice when they worshipped the idol Molech.   The Daily Mail reports that after decades of historians denying that the Carthaginians sacrificed their children as described in Greek accounts, a new study claims to have found ‘overwhelming’ evidence that the ancient civilization really did carry out this bloodthirsty practice.  Like the Aztecs, the Maya performed child sacrifice in specific circumstances, most commonly as foundation dedications for temples and other structures, or on the ascension of a new king.
But as we can see, child sacrifice is not something that was confined to ancient history.  While I hate the murder of babies through the act of abortion, I am literally sick at my stomach to think that there are those members of the Elite that worship at the altar of child sacrifice.  But what do the international courts hope to accomplish?  I certainly wish them the power to indict and punish the guilty, but I also know that Satan's power is strong in these days and he will not be defeated until our Lord descends from Heaven to put all His enemies under His feet.
And in That Day, I look forward to the casting into the fiery depths of hell those who have taken part in causing harm to these innocent children.  I'm sorry, but I do not have it in me to ask God for mercy on their souls.  I'm not even sure that God's Light can reach the depths of this darkness.  But I refuse to leave my mind there ... I choose to focus on the truth that these children will be avenged and in God's sovereign way.  God Bless the children!

2 Chronicles 33:6    "And he burned his children as an offering [to his god] in the Valley of Ben-hinnom [son of Hinnom], and practiced soothsaying, augury, and sorcery, and dealt with mediums and wizards. He did much evil in the sight of the Lord, provoking Him to anger."