A Look At The Big Picture: Satan's kingdom vs The Kingdom of God

Before we dive into this conversation, we need to ask some questions. The first obvious question is this ... did you know that Satan rules all the kingdoms of the world? He says so in Luke 4:5-6 ... Then the devil took him [Jesus] up and revealed to him all the kingdoms of the world in a moment of time. “I will give you the glory of these kingdoms and authority over them,” the devil said, “because they are mine to give to anyone I please." 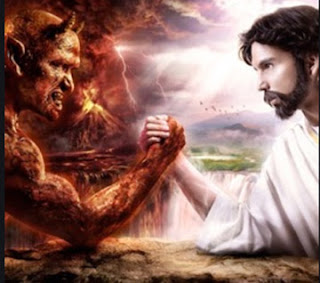 But what is Jesus's ultimate response to this? It's in John 12:31. In this verse, the Lord says, From this moment on, everything in this world is about to change, for the ruler of this dark world will be overthrown. What exactly does that look like? When the Son of God came to the earth the first time, He came to re-establish dominion of the earth, bringing all the power and authority of the Kingdom of God with Him. The earth was designed to be governed like God's Kingdom in Heaven and ruled by man's authority [who was made in the image of God and given dominion over the earth]. But Satan usurped that authority in the Garden of Eden, and set up his own kingdom in opposition to the original design. When Jesus was resurrected and ascended into Heaven to sit at the right hand of the Father, He gave all power and authority [to continue the Kingdom of God here on earth] back to man.
When He returns at His Second Coming, the Lord will render His final judgment of the world systems which will result in the irrefutable overthrow of Satan's kingdom of darkness. When Jesus announces that everything is about to change, He is foretelling the impact that the Cross will have on this world. Satan's primary weapon to control man -- the reality and fear of death -- was defeated by Christ's sacrifice on the Cross, which delivers mankind into the eternal Kingdom of God.
The good news is that Satan will not always dominate and rule the earth and its inhabitants. The bad news is that Jesus has yet to return, so the devil still reigns over his kingdom. Yes, if you believe in Jesus Christ as your Savior, you will one day reside in Heaven with Him. But what about the rest of your life while still on earth; or the lives of an unknown number of generations until He does return? The truth is that we are in the midst of a transition from Satan's domination and supremacy over the earth to the future reality of Jesus Christ's sovereign rule. And this transition will be neither easy nor painless. In fact, the closer we get to Christ's return, the more difficult our existence will become because Satan knows his time is short.
The prophet Daniel calls those last days "a time of distress", and Jesus, Himself, says, For this will be a time of great misery beyond the magnitude of anything the world has ever seen or ever will see. Unless God limited those days, no one would escape. But because of His love for those chosen to be His, He will shorten that time of trouble.
This we know: Satan is not going to go easily or willingly. The Bible gives us many warnings that his fury will be focused on the followers of Christ, God's chosen people of Israel, all of humanity to keep them from turning to Christ, and to the returning Jesus, Himself. He will instigate religious persecution, and as hard as it is to fathom, a lot of it will come from "the Church" itself. Sadly, there is a vast number of the Church who are Christian, in self-proclaimed name only, and will easily fall prey to religious deception and false teachings.
That may be hard for you to digest, but it is the truth of the Bible. And it is becoming increasingly clear to me how few "Christians" actually read their Bible, let alone take the time to study and understand it. In this day of technology, it is far too easy to listen to a podcast or read an article that declares it is the purveyor of God's Truth. But how many people take that information and measure it against Scripture? For that matter, how many people sitting in churches, whether small or large, simply accept the teachings of those who hold authority over them?
As true believers in Christ, we must love the Truth, and our beliefs must be firmly rooted in the Word of God. It is also incumbent upon us to have the strength of character to defend our beliefs, or we, too, could fall prey to satanic deception and false teachings.
I do not write this to give you pause, or to cause you to shrink back in fear and anticipation of anxiety, sorrow, or pain. On the contrary, I write this to activate your spirit to get in the fight! The Lord promises that we can look forward to the end of Satan's rule on earth. There will be a new age in which Satan and his demons will be isolated from humanity for 1,000 years and the earth will be under the sovereign rule of our Lord and Savior. The battle for humanity that has raged for thousands of years will be over and we will stand victorious with our King!
Yes, Satan will use a human ruler who will "make war with the saints", and there will be a false religious system that will lead many astray. But if you know the truth of all this in the Word, then you can also know the truth of the promise that Christ's kingdom will never end. In the end, it really is a battle between two kingdoms -- Satan's kingdom on earth, and God's Kingdom in Heaven. It is important that we be prepared for what's coming and know how to recognize God's Truth. Your eternal life depends on it!

Daniel 7:27    Then the sovereignty, power, and greatness of all the kingdoms under heaven will be given to the holy people of the Most High. His kingdom will last forever, and all rulers will serve and obey Him.
Posted by Pam Kohler at 6:30 AM